The Genius Of The Gun Grabbers

David Hogg is an opportunistic little liberal weasel that has parlayed the shooting of his classmates into a political career. Despite being a borderline imbecile and having crappy test scores, he was given a spot at Harvard. Side note, if you think going to Harvard indicates you are smarter than average, you aren't really paying attention. Somewhere in America, an actual really bright student is not going to Harvard because he lost his spot so Harvard could have a social justice mascot. David is trotted out like the court jester for the cameras to yammer about gun control even though he has never shot a real gun in his life.

Little Davey isn't content with spreading misinformation about guns. He decided to weigh in on a very short video clip that shows a cop pepper spraying a black guy in the face and then throwing him down. I am not sure what the context here is, there are two cops arresting a different black guy surrounded by a crowd of young folks. It looked pretty excessive but I wasn't there and I am always suspicious of videos that start well into an event. Anyway, this is the sort of logical, critical thinking you get from someone accepted to Harvard. 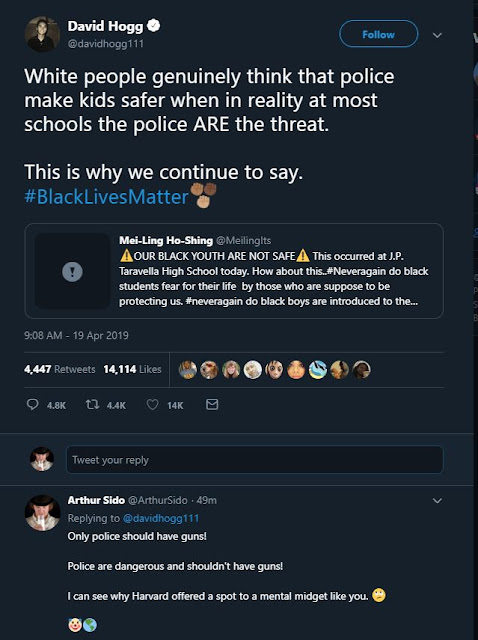 The gun-grabbing community wants to disarm the civilian population. They don't trust us with guns even though the vast majority of gun violence is restricted to a small percentage of the population using handguns they obtained illegally.

Hogg is unfortunately typical of younger Americans. Force fed a diet of politically correct "social justice" garbage their entire lives and taught to rely on their feelings instead of thinking critically, they can't see even one step beyond what they are saying. They are unwilling and unable to make the intellectual steps required to see the consequences of their proposals. "I see cop doing naughty thing, cops are the real threat!" even though a young black man is almost entirely in danger from other young black men rather than the cops.  But Davey lacks the intellectual maturity and ability to realize this or even to consider it.