This is the sort of "news" that comes out with such regularity that it almost turns into background noise. "Oh, more state sponsored race war aimed at me? Oh well, the NFL draft is on!"

In Grand Rapids, Michigan, it may soon no longer be just unfair to call the police on people of color who have done nothing wrong. It may be downright illegal.

The City Commission held a public hearing Tuesday on a proposed human rights ordinance that would make it a criminal misdemeanor to "racially profile people of color for participating in their lives," the city said in a statement.

The charge could result in up to a $500 fine, according to CNN affiliate WOOD. 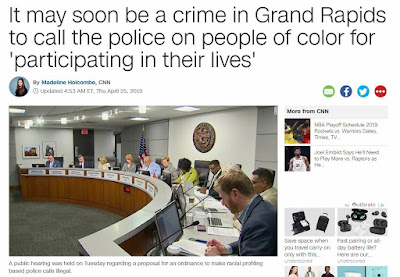 This story sounds like something your average boomercon, civic nationalist, MAGA-types would instinctively shy away from criticizing. "This is great, people shouldn't call the cops on other people because of their skin color! America is just a set of ideals!". According to the media, there is an epidemic of white people calling the cops on black people for doing nothing other than being black. When you start to look into it, the widely publicized incidents turn out to be a little more gray. Someone was trying to enter a secure building without credentials, people were barbequing in a park using an illegal method, someone was parked illegally blocking the road but the caller was white and the person being called on was black so ipso facto hate crimes. Laws like this give the left, especially the self-loathing white left, all the feelz so it will be replicated across the country and I wouldn't bet against seeing something like it turned into a Federal crime if Dems retake control.

Becky White is at home alone in her safe suburban neighborhood. It is late and the kids are in bed. Her husband is away at a business meeting in another city. She hears a neighborhood dog bark so she peeps out from behind her curtains to see what is going on. On the street she observes three men wearing dark clothing, including hooded sweatshirts with the hoods up. They are walking up to cars parked along the road and in driveways, peering inside as if seeing what is in the car and if they are locked. They do this at several cars as they walk down the street.

Alarmed at this odd behavior, Becky calls the police. Fortunately a cop is nearby and is on the scene in minutes. Becky can't see what transpires but the cop asks the three men what they are doing. Not impressed with their answers, the cop asks for ID. Upon discovering the men are not from that town but are from the neighboring city, he suggests they move on. The three men leave the area, returning to their car parked a street over and head back into the city. Becky sees the cop drive by slowly and goes to bed, reassured that her neighborhood is safe once again.

The next morning the Reverend Lucius Grifter of the Emmanuel African Episcopal Church arrives at the police station. In a strange twist of fate, local and national media happens to be there at the same time, cameras rolling. He makes a statement to the adoring media about an injustice done to three fine young brothers who were minding their own business before being hassled by the police, making them fearful for their lives. Half an hour later, Reverend Grifter comes back out smiling and assures the waiting media that justice will be served.

Becky is at home making muffins and sees the news. She is horrified and saddened that these three brave young men suffered yet another injustice at the hands of white supremacists. First slavery and now this?! But the police are on the job and are being watched by Reverend Grifter and he is a pastor so she feels confident that justice will be done.

15 minutes later three police cars pull into her driveway. The muffins are cooling and The View hasn't come on yet so Becky curiously walks out to see what is going on. Maybe they are following up on the suspicious characters and letting her know what happened? Upon exiting the house she is set upon by the police, handcuffed, Mirandized and thrown in the back of a car. Becky is terrified, she has never had so much as a speeding ticket!

An hour later she finds herself in front of a judge, charged with making a racially based police report. It turns out the three men she called the police about were black and just "participating in their lives", which in this instance happened to be wandering around a neighborhood casing cars. These young men were turning their lives around and then were the victims of racial profiling, police brutality and a hate crime.

Becky is mortified. She never realized that she was a racist and white supremacist. She tearfully pleads guilty and throws herself on the mercy of the court. The judge sternly sentences her to pay a fine of $500. Becky writes a check on the spot and apologizes for her crime.

As Becky leaves the courthouse, she is thankful she had the chance to atone for her racist misdeeds. She vows to herself to do better. Lost in her reverie of guilt and shame, she almost walks into a young woman of color wearing a suit. The young woman glares at Becky and hands her a piece of paper. Becky takes it although she is confused. The young woman informs her that she has been served with papers for a civil lawsuit. The three young men are suing her for defamation, emotional distress, loss of employment opportunities and violating their civil rights. Reverend Grifter is signed on as a co-plaintiff for the distress he suffered seeing these promising young men so mistreated by the system.

Becky thinks it is time to call her lawyer. Also her realtor.

I wonder what this sort of law will do to things like community policing and neighborhood watch associations? Will you have to try to ascertain the race of a suspicious individual so you don't accidentally call the police on a "person of color" that is just "participating in their lives"? Will this decrease criminal behavior or encourage it? Also, "participating in their lives" is one of those pseudo intellectual sayings that doesn't actually mean anything but makes the user smugly self-assured of their intellectual superiority.

Never mentioned is the fact that black on white crime is wildly more common than the reverse. Even talking about the disproportionate rates of black crime is considered a borderline hate crime and will get you banned on social media.

Laws like this are only the beginning. More laws that will decriminalize behavior depending on the race of the criminal are coming. Instead of focusing on crime prevention, we will instead find ways to make crime race specific.

The results will be very predictable. Bug out now and get somewhere you will be somewhat insulated from the inevitable backlash.
Posted by Arthur Sido at 9:30 AM