Is Our Society Worth Saving?

Sometimes I really wonder. Some days I think it is worth fighting for and some days I come down firmly on "nope".

I am having more "nope" days of late. 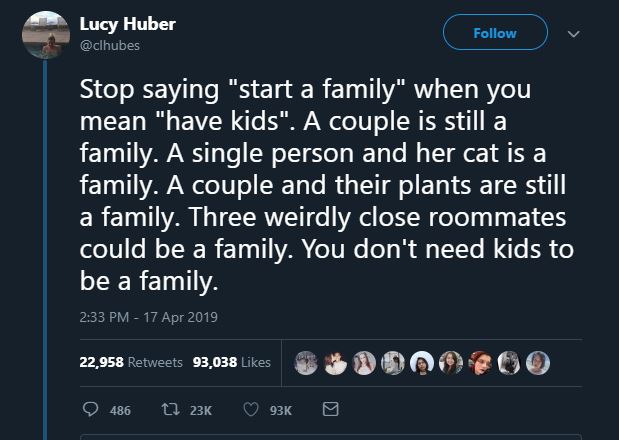 What the actual hell is going on here?

The phrase "start a family" has been in existence for a very long time. In less obscenely awful times, the normal course of life for normal people was that a man and woman would meet and decide to get married. At some point after the marriage the wife would get pregnant. Of course this wasn't always the case, infertility has been a problem forever. Some men can't get women pregnant and some women are just barren. But for most of human history in the Western world, "starting a family" was one of the key milestones of life.

Living in the middle of an Amish community we still see a lot of this. The Amish only attend school through 8th grade and then start to prepare for adulthood. High school aged boys learn from their fathers to do something useful, farming or carpentry or some other way to support a family. Girls the same age often take over many of the household chores from their mothers, although many also "work away" for a few years. Marriage is assumed, boys and girls don't start dating until they are 18 and when a boy asks a girl out for the first time, it is because at some point down the road they are thinking marriage. While some wait until later to date and some never get married, for most marriage and children is the reason for dating. They are not stumbling from one dating relationship to another until they finally meet "the one". They are seeking "the one" right off the bat and asking a girl out implies you strongly suspect she might be the one. Most Amish get married, get married fairly young, essentially never divorce, have kids early and often and are generally happy. It is not idylllic, there are plenty of serious issues in their community. The rules are baffling and most Amish don't understand them. Their lack of education can be off-putting and they can be incredibly naive and gullible. They are very stand-offish toward non-Amish and even Amish we have known for years are very private. A decent number of Amish weddings happen on Sunday, which is code for "girl got knocked up and they have to get married right away". Still, it is light-years better than trying to explain how a single woman with a cat or a couple with some houseplants qualifies as a "family:".

This is important. The saying "start a family" is not intended to denigrate anyone. It is just a simple phrase that indicates that a married couple is moving to the next natural stage, having children. Couples getting married and starting a family is how the species and the society is perpetuated. But a lot of people seem to really like this notion of redefining the word "family" to mean any sort of connection between people, or animals or even plants. I posted this short thread about her assertion: 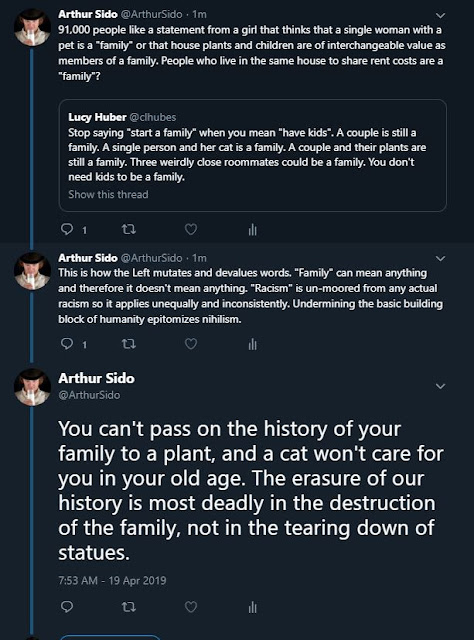 I think those are solid points I made but when I tweeted this, her tweet had 91,000 likes. I checked a few hours later and it was up to 111,000 likes. I just checked again and it is at 149,000 likes and 36,000 retweets. Those are Trump level numbers. The childless late 30s cat ladies are chugging down box wine and creating fake twitter accounts just to like this tweet.

What makes this idea that family can mean anything you want resonate with so many people?

The answer is very complex but it is also very simple. Humans yearn for connections and no connection is stronger than family. We always understood this but some time in 20th century people who hated this idea started to gain ascendancy by infiltrating our cultural institutions: colleges and public schools, the entertainment world, the bureaucracy and "mainline" religious bodies. They started to denigrate the normal family structure, told women that they need a man like a fish needs a bicycle, urged women to find their identity in careers and "education" and to view marriage and child-rearing as onerous punishments that interfere with a happy and fulfilling life, instead of being the main driver of a happy and fulfilling life. Sex became disconnected from reproduction via birth control and abortion on demand, ceasing to be something one only engaged in within the bounds of marriage and turned into a recreational sport. Government, fueled by the tax dollars of men, began to replace those same men as the protector and provider of women and their children. Far too many men were all too happy to go along. Sex without responsibility, not even if it resulted in children? What a great deal for cads and scoundrels. In the early days of the sexual revolution the future seemed bright. Full "equality" between the sexes and all the humping you want, just for the taking.

Fast forward to the turn of the millennium.

More and more women are finding out that the pot of gold at the end of the sexual revolution's rainbow is a toilet bowl. Women have more "opportunity" than ever before. Women are in every professional field. They outnumber men in college, by some pretty wide margins at some schools. A woman came within around 80,000 votes of becoming President in 2016 and the odds are very good that a woman will be President or Vice-President in January of 2021. All of these things are supposed to make women happy.

But women are miserable.

You can see it in the workforce. You can see it on social media with the endless vacillating between empty gushing about how awesome things are to the passive-aggressive complaining. You can see it in stores as women try to fill the void in their lives with purchasing stuff and more stuff. You can see it in the way so many women, especially "professional women" are gulping down anti-depressants like Skittles, washed down with boxed wine. They were promised a utopia and instead things keep getting worse but for some reason they think that if they get just a little more "equality", they will suddenly break free into glorious womanhood and have it all. The dirty secret of the feminist pyramid scheme is that all feminism is accomplishing is spreading the misery of feminist "intellectuals" and cascading it down to normal women. It is trickle down misery, a handful of super homely early feminists looked with jealousy at normal women with happy home lives and decided to make those normal women as miserable as they are. Their plan seems to be working.

Lucy Huber, the author of that very popular tweet, is apparently 30 years old, not bad looking and reasonably intelligent. She has three cats and is engaged, and also has spent too much time pondering and writing about her own breasts. In more normal times she would be married already and have a couple of kids. She isn't unmarried right now because she is hideously ugly, it seems to be because she is incredibly neurotic and has bought into the mystery cult of feminism. I assume she wants a family but doesn't have one yet and that clock is ticking. Biology is pretty hard to defeat. You can freeze your eggs but you can't make yourself younger. Being up every other hour all night for night after night is a game for 23 year old women, not 43 year olds. So she copes for her lack of a family by redefining the very word. Now she and her fiance and her cats are a "family". A couple with a houseplant is a family. People sharing rent are a family. An infinite number of iterations of combinations of humans (or animals or even plants) all qualify as a family. Once you let loose the normal definition of a family, anything goes. The stranger sitting next to you on a bus says good morning? Now you are family! Looking at a row of potted geraniums at a nursery? Congrats, you and the geraniums are a family!

If we can't even agree that a family has certain parameters and that relationships outside of those parameters are not families, then we have lost the foundational structure of human society. We already have no identity as Americans other than people that happen to be within the borders of the United States. Without a real, meaningful definition of family we are all just a bunch of tax cattle and consumers, economic units that bounce from one relationship to another with each other (and animals and plants). That is no way to sustain a society. This is the way we are heading and it probably is time to admit that we need to burn it all down and start over, rebuilding from the ashes because what we have right now isn't worth saving.
Posted by Arthur Sido at 9:55 AM