I am sure you didn't see this news story because it doesn't advance the narrative:

Pregnant victim randomly attacked by group of teenagers speaks out

Why didn't you hear about a pregnant woman being assaulted on camera by teenagers in Quincy, Massachusetts? I will give you some quick visual clues, let's see if you can spot the reason:

Here are the teen assailants that were arrested, "Tyrese D. Johnson-Nurse, 19, and David D. Russell, 18". Tyrese has already mastered the head thrown back, "look at what a bad ass" mug shot pose. I am guessing this isn't his first time in front of a police camera. 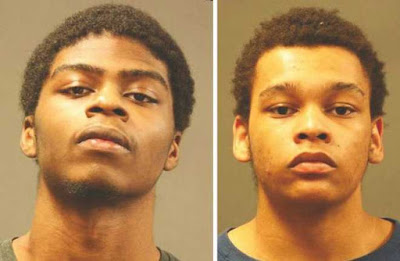 And here is the victim, Leanne Hindy. 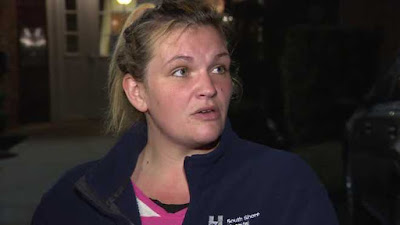 These fine young gentlemen, who no doubt were on their way to work after volunteering at a nursing home and who had recently turned their lives around, are being held  "...on charges of aggravated assault and battery on a pregnant woman and assault and battery". If convicted you can expect them to spend a number of years in jail. Since the one charming young gentlemen said, in response to the screaming woman saying that she was pregnant, “I hope he dies” while kicking her in the stomach, it wouldn't be out of the question to charge him with attempted murder.

For a fun little game, imagine that the pregnant woman was black. Two white teens decided, apparently for no reason, to spit on her, beat the crap out of her and kick her in the stomach while saying they hoped her baby died.

Jesse Jackson and Al Sharpton would be on the scene immediately, marching arm and arm with her family. Every Democrat would weigh in about how outraged they were. Trump would be blamed by one and all. There would be trending hashtags about justice. You can also be sure they would be at least investigated for committing a hate crime.

But in the real world where whites are overwhelmingly more likely to be the victims of violent crime perpetrated by blacks than vice versa, this won't be investigated as a hate crime. It will probably end up with a plea bargain and they will get a slap on the wrist. Unless the two black teens were wearing T-shirts saying "I hate crackers" and were caught on video saying "Ma'am we are attacking you strictly because you are white and we hate white people", there will be no suggestion of a hate crime because those laws are not really intended to punish people for committing crimes based on hate.

If you needed further evidence, this should be it. So-called hate crime laws are designed to be punitive and to enhance the punishment of white people involved in crimes against non-whites as a retributive measure to "balance the scales" for past injustices committed by others whites, both real and imagined. That is their only purpose. Who knows what the motivation of these two black teens really was. Would they have assaulted the pregnant woman if she was black? If this was a different state than Massachusetts with restrictive laws on firearms ownership and relatively low rates of concealed carry permits, would they have been so bold? If this happened to my wife, pregnant with my child and one of these thugs attacked her and kicked her in the stomach while expressing his desire to kill my child, I would have killed him right there in the street to protect my wife and unborn child. I guess criminals are more bold where the population is disarmed.

Stop imagining you are living in a country that operates under the rule of law. Everything is now tribal. For one tribe to win, another has to lose and everyone is playing by these rules except for one tribe, which happens to be the largest tribe and the ones responsible for the free society enjoyed by the other tribes. The government, the "education" system, the "entertainment" world, the legal system and very soon even the tax code, are all being weaponized to provide an official enforcement mechanism for this tribal warfare. "Muh Constitution" isn't going to save you. Trump isn't going to save you. Relying on basic human decency isn't going to save you.

We are all living in a clown world and you either adapt or you are going to end up on the train to a gulag.