A movie I have been meaning to watch for some time is Bitter Harvest. The film is set in the 1930's in Ukraine during the attempted genocide known as the Holodomor. No one knows how many people actually died but it was a huge number, from around 2 million all the way to 12 million, so the true number is probably somewhere in the middle. I finally got around to watching it the other night and I highly recommend it. Not because it is a great film, it isn't, but because it gives us a different and interesting look at the most pivotal era in modern history.

What makes this film so interesting is not the acting or plot, which are kind of scattered. What truly makes it so interesting is that it is one of the few films from the era surrounding World War II that expose what a monster Joseph Stalin truly was and what an inhumane system Communism turned out to be. World War II movies almost exclusively focus on the Third Reich, Hitler and the Holocaust but the Soviets, Stalin and the Holodomor were every bit as awful. Given that the Soviets lasted for half a century longer, it is easy to make the argument that the Soviets were worse than the Nazis. I know that is verboten to say because Holocaust but it is nevertheless true.

One of the things that really caught my eye was how helpless the kulaks were when the Soviets showed up. Charging on horseback with swords against men with rifles is suicide. Yet they did it anyway. Twenty men with rifles can easily cow a village of people with only a handful of swords and farm tools to fight back. If that village is armed even with things as simple as hunting rifles and shotguns? That is completely different. There is an important lesson here for Americans. Certainly the citizens of a small town are not going to fight off a concerted effort by U.S. "law" enforcement but partisans with AR-15s and hunting rifles can make life hell for a governing force, especially trying to occupy a nation this large.

Something else was that these utopian ideas of collectivization always require escalating levels of state violence. You can't let people resist collectivization and the only way to get people to comply is to bully them, threaten them, jail them and eventually kill them. Stalin ordered the people of Ukraine to be butchered and starved for "the good of the state". There are plenty of people right now that feel this way. If you stand against "progress" toward a genderless globalist mush of racially homogeneous economic domination, you are a Nazi and white supremacist. Your speech that disagrees with me is "violence" so therefore I am justified in responding to your "violent speech" with actual violence. This is not some conspiracy theory or fantasy. Not that long ago the Weather Underground was apparently casually talking about the need to eliminate 25 million Americans if they refused to be "re-educated". The Weather Underground was headed up by Bill Ayers who was the buddy and mentor of former U.S. President Barack Obama.

The road from America the beautiful, amber waves of grain and all of that, to the Holodomor is not as long as we might think it is. 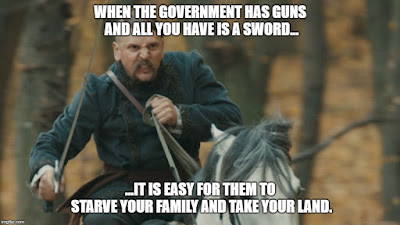