Last week was dominated by two news items, first the nothing-burger Mueller report that shows that in spite of searching far and wide for evidence of a pre-determined "crime", there is no evidence that the Russians colluded with the Trump campaign and second the sudden dismissal of the charges against hate crime hoaxer and racist sodomite Jussie Smollett in Chicago. It was the most blatant subversion of justice for reasons of racial solidarity we have seen in a long time. More on this here.

Although Jussie is the butt of innumerable jokes, there are people who don't care that he obviously was lying about this whole fiasco. It was suggested, completely seriously, that the Nigerians he paid to pretend assault him might have been wearing "white face" make-up and that this confused Jussie into thinking he was "attacked" by two white men. Why he would think this when he paid the men to do this and was on the phone with one of them immediately before and after the attack is left unanswered.

It also turns out that Jussie Smollett is up for an award from the NAACP Image Awards, a separate awards program for non-white actors and entertainers as "Best Supporting Actor in a Drama Series" (edit: he ended up not showing up for the awards and didn't win anyway) 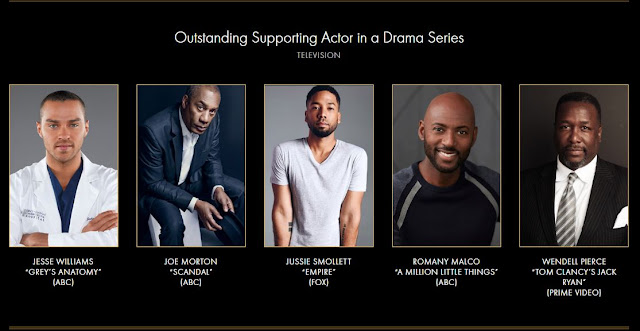 The host of the Image Award, Anthony Anderson of "Black-ish", another show I have never watched, is hoping that Jussie Smollet wins because he got away with something.

Smollett is nominated for the 2019 NAACP Image Awards, scheduled for Saturday. Six-time host and "Black-ish" star Anthony Anderson told Variety on Wednesday that he hopes to see the controversial actor there.

“I hope he wins," Anderson added. "I’m happy for him that the system worked for him in his favor because the system isn’t always fair, especially for people of color. So I’m glad it worked out for him."

So Mr. Anderson is happy that the "system" worked in his favor, not because he is under any illusion that Jussie was lying about the whole thing, but because he is black and thinks the system is "unfair". In other words, he is happy that Jussie got away with slandering white people and Trump supporters because it helps, in his mind, to balance the scales of injustice. The situation is not one of facts and evidence. It doesn't matter if Jussie lied or not. What matters to Anthony Anderson is that someone on his team won. To him that is justice, a "person of color" putting something over on the "system".

It reminds me of the O.J. Simpson verdict. In spite of what seemed to be pretty clear evidence that Simpson murdered his ex-wife Nicole and Ronald Goldman, he was acquitted. Attitudes about the verdict were very mixed depending on your race. According to CNN in a poll right after the verdict, whites believed Simpson was guilty by a margin of 62-21 while blacks thought he was not guilty by a mirror image margin of 66-14. Almost 2/3 of blacks surveyed thought Simpson was framed. About equal percentages of whites thought that blacks assumed Simpson was not guilty because he was black (58%) as blacks believe that whites thought he was guilty because he was black (60%). What that means is that how people viewed the verdict was overwhelmingly based on their race.

Jussie Smollett seems to be a modern manifestation of this. Most non-cucked whites understand that Jussie Smollett set this whole thing up to help his acting career and had no problem lying about being attacked by two white men and that this happens a lot when it comes to "hate crimes". An awful lot of blacks seem to understand this as well but don't care because what matter is not what actually happened but whether it evens the imaginary score they keep in their heads. "Justice" is when my team scores, not an outcome based on the facts and evidence.

What does all of this mean?

My take is that we are seeing the "justice" system rapidly morphing away from an imperfect system where the goal was to determine fact from fiction and deliver justice either way based on those facts and evidence to an outcome based system where what matters is who wins depending on their oppression score. It is already common practice to shop for venues where minority defendants can get a jury that is more racially similar. The illegal who alleged murdered Millie Tibbets in Iowa, Cristhian Bahena Rivera, is being moved to a different county with a much larger percentage of Hispanics. His lawyer knows full well that a jury with more Hispanics is more likely to refuse to convict a Hispanic man accused of killing a white girl, regardless of the evidence (which included his confession of abducting Mollie and his leading of the police to her body).

You can argue about the legitimacy of this change. Many can and have argued that there is historical evidence of discrimination against minorities in our legal system. I am sure much of this is true but I question whether it has been true in the last 40-50 years. How you view the fairness of our legal system has a lot to do with your race. Most whites are like me, we believe that the wildly disproportionate rates of incarceration for blacks and Hispanics is because they commit crimes at wildly disproportionate rates. Minorities generally assume that the incarceration disparity is due to discrimination, and that whites are likely to get off when charged with a crime while blacks and Hispanics are more likely to be jailed and jailed for much longer.

In an outcome based legal system the question is not "What are the fact in this case?" but rather "What is the overall score between my team and the other team?". In this sort of team-score system, it is OK if someone gets away with a crime because that offsets someone being jailed unjustly. Just like laws in South Africa are being applied to settle scores, our legal system is headed the same way. This is obviously very dangerous. Right now the country is on edge as the various identity groups and tribes look at the shrinking pie and start maneuvering themselves to get their share. One of the only things holding it together is the faith the majority of Americans have in the justice system. We know it is often imperfect but we believe it is our best way of keeping the peace. What happens when the majority of Americans no longer believe they will get a fair shake in the justice system? For starters we stop worrying about "getting into trouble". What is keeping this simmering cold civil war in America from going hot is that most of us still, probably naively, believe that the rule of law still applies. We trust in our system of government and our fellow American. But when it becomes apparent that we no longer can trust in a fair shake from the legal system and when more of us realize that our "fellow American" is no longer interested in fellowship and isn't even American, the disincentive for playing by the rules that are being stacked against us diminishes. I have quite a bit more to say on this topic later.

In the big picture, long term, it is clear to all who are watching on either side of the fake partisan divide that we are headed for a single party rule in America. The Democrats have created what appears at first blush to be the perfect long-term strategy. They locked in the black vote decades ago and that is never going to change. Candace Owen is not a sign of things to come, she is an outlier. There is no "Blexit". The same is true for Jews. No matter how much Republicans pander to AIPAC and talk about our "greatest ally", no matter how much money we throw at Israel every year, Jews reliably vote for Democrats 3-1. Jewish groups are happy to take our money and our unquestioning support while refusing to back those that vote to fund and protect them. Hispanics will continue to vote in mass number for Democrats, at least 2-1. Every three million new Hispanic voters means a net permanent edition of 1 million new Democrats. Muslims will vote Democrat. Asians inexplicably vote Democrat, even though Democrats support policies like affirmative action and higher taxes that disproportionately harm that community. Wealthy urban whites, single white women terrified of losing the "right" to murder their unborn children, various sexual deviants, all are locked in for Democrats.

Meanwhile the most stalwart Republican voters, middle/working class white evangelicals are not having enough children and their institutions are riddled with either cowardly old men afraid to lose their cushy jobs at seminaries and para-church groups or outright wolves among the sheep pushing for normalizing nonsense like same sex acceptance or reparations. The next five years will see "conservatism" under assault from within as much as from without. You can't fight your enemy when you are constantly having to guard your own back lest you find a knife in it from your "allies".

What that means is that as Democrats take control by promising free gibs and punishing heritage America for their past sins, the only way to keep their coalition from devouring each other is to continually escalate the bribes and retribution against a shrinking heritage population. The government in the very near future will be used only for rewarding some groups and punishing others, rather than forming a system of government to allow people to exercise quaint, outdated concepts like responsibility and liberty. This is already happening in South Africa where the government seems obsessed with punishing the Boers while letting the country fall apart. It doesn't matter if something will work or makes sense, all that matters is whether your proposal will temporarily satiate the desire for vengeance.

Get ready for a a new South Africa but this time in a nation with over 6 times as many people, covering 8 times as much land, with multiple large racial/ethnic groups and with hundreds of millions of guns and trillions of rounds of ammunition. A nation where there are millions of private citizens with extensive military and law enforcement training. You can govern a nation with 100,000,000 gun owners but you can't rule one.