The Media Is Lying, Episode 12,652: Senegalese Man Tries To Burn Italian Children To Death In Bus

When Brenton Tarrant allegedly shot up a couple of mosques in Christchurch, New Zealand, the media reponse was swift. In record time we knew who the alleged shooter was. We knew his name and saw his picture, revealing that he was a white guy and were told over and over for some reason that he was short. We were told what his motivations were before the final victim was even dead: he was branded a "white supremacist" immediately and the manifesto that was allegedly written by him and posted online swiftly circulated around the internet, only to be just as quickly suppressed so that we could be provided with snippets of the manifesto selected by the media. The response from the media was actually pretty impressive in its uniformity. Before the news cycle really even ramped up Brenton Tarrant was declared a white supremacist killing Muslims as a response to mass migration.

Fast forward to a few hours ago. The BBC ran a report from Italy of an attempted horrific crime. Here is a screenshot of the headline: 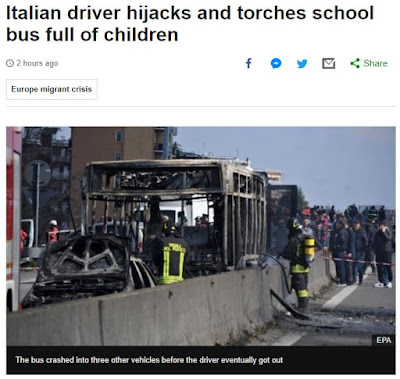 Some crazy Italian, right? Well not exactly. In spite of the headline, Italian driver hijacks and torches school bus full of children, we find that the man wasn't actually Italian.

The driver, a 47-year-old Italian citizen originally from Senegal, was arrested.

In other words he was a Senegalese man that had been granted Italian citizenship. So he was not in fact Italian. His name is obviously known but isn't in the story. There are no pictures of him. That is probably because someone from Senegal would almost certainly be black. Since Senegalese people are overwhelmingly Muslim (92%), he is probably a Muslim. He is probably not named Antonio or Salvatore, he likely has a clearly African name. So of course the media is not going to rush to judgment, like they did in Christchurch, so even though the BBC reports that:

A teacher who had been on board the bus said the suspect was known to be angry about Italy's migrant policy. Some reports said the man had shouted "stop the deaths in the Mediterranean".

They still try to leave the door open that it could be something else:

Milan prosecutors said they were investigating all possible motives including terrorism.

"All possible motives" while in Christchurch the media found their motive within moments, spread it and never wavered (and never will). Even when noting that the Senegalese man was also a drunk, the BBC didn't miss the chance to take a shot at Italian interior minister Salvini:

Italy's right-wing interior minister, Matteo Salvini, reacted with outrage that a man with a record of driving while under the influence of alcohol could have been allowed to drive a coach full of children.

What does Salvinin being "right-wing" have to do with the story? Absolutely nothing but it is a chance to try to paint him as being reflexively against migrants.

What is really going on here is that a man from Senegal, a craphole of a country with high illiteracy, a per capita GDP of around $2,600 compared to over $37,000 for Italians and bottom tier average IQ who has been given a new home in Italy but is still angry apparently because Italy isn't taking in enough "refugees" and migrants so he decides to hijack a bus full of Italian kids and burn them to death, for justice or Allah or something.

Fortunately he didn't succeed because he was probably either drunk or didn't plan it out or both.

It is no coincidence that the BBC refers to a Senegalese man as an "Italian driver". It is an attempt to deflect attention away from the man being a migrant from a Muslim dominated African nation. This is the sort of open manipulation perpetrated by the media on an hourly basis, subtly changing the perception of their generally willfully dumb audiences to avoid noticing inconvenient facts. Don't believe anything you read or hear without doing your own research.

I hit refresh on the story and now the BBC has expanded the story to talk even more about "right-wing" Italian politicians. Here is the updated language which removes the reference to the Senegalese driving being a drunk.

Located at the frontline of migrants crossing the Mediterranean Sea into Europe, Italy has tried to close its ports to boats.

On Tuesday, around 50 people were rescued by a charity ship from a rubber boat off the coast of Libya and taken to the Sicilian island of Lampedusa. Italian authorities ordered that the ship was seized and launched an investigation into the alleged aiding of clandestine immigration.

A decree issued in September makes it easier to deport migrants and take away their citizenship if they commit serious crimes.

Now they mention "right-wing" twice, as if that is the real story. Right-wing! Populist! Anti-immigration!

All quotes copied and pasted directly by me.
Posted by Arthur Sido at 3:52 PM