More Selective Outrage From The Media

Overnight the news was filled with reports from New Zealand that a gunman had killed a number of people in Christchurch. The reports are still pretty scattered as is often the case but a man named Brenton Tarrant has apparently been arrested for the shooting and we are being told that at least 49 people are dead, presumably all of them Muslims, at two mosques. Tarrant allegedly released a manifesto that expressed "anti-immigrant" and "white supremacist" sentiments. I haven't read it yet so I am going off of media reports, always a risky proposition. His arrest, identification and listed motivation happened lightning fast in contrast to many, many other terrorist attacks where we often see someone yelling "Allahu Akbar" but we aren't allowed to speculate about motives ("His motives may never be known...").

Media coverage is predictably intense, dominating every media site and almost all of Twitter trending topics, and the recriminations from prominent voices in America followed the usual pattern with people blaming Trump, guns and anyone who is insufficiently enthusiastic about mass immigration. Uber-twit Alexandria Ocasio-Cortez posted a tweet mocking people for offering prayers after Muslims were killed...while at Friday prayers. 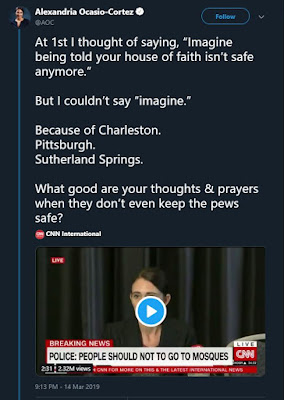 Most tone-deaf tweet ever? She then launched into a series of tweets about the dangers of "white supremacy", continuing her string of daily demonstrating her absolute lack of any understanding of any topic. You can be sure that, as apparently intended, this act will launch any number of actions designed to confiscate weapons from law abiding citizens and suppress free speech, at least on the right. Again that is apparently the intent of the gunman.

It ought to go without saying that this is a horrible act. This guy allegedly planned this out well in advance, wrote an extensive manifesto, was prepared for his act. This wasn't spur of the moment. It was the epitome of terrorism and political violence, aimed at causing worldwide response.

There are few things more horrible than unarmed, essentially defenseless people being killed. If he had shot up an ISIS training camp, no one would have cared. These were people attending their house of worship, including women and children. It is not an uncommon scene in the world, in fact it is quite common. What is different is a) the victims and alleged perpetrator and b) the coverage from the media.

What is noteworthy here is the near universal condemnation of this act by white conservatives, while similar frequent attacks by Muslims elicit little notice. That is not hyperbole. This list contains the targeted attacks on Christians by Muslims since 9/11. It includes recent attacks like an attack on Christians in Maro, Nigeria that left 32 dead on February 26th. An attack on Catholics in Angwan Barde, Nigeria that resulted in 10 dead on February 10th. A large attack in Jolo, Phillipines that left 27 dead and 111 wounded on January 27th. A week later on the 20th of January in Zaoro Sangou 13 more dead. Last November in Alinado 42 people were killed in a cathedral. October of last year 36 Christians killed by men shouting about Allah in Kasuwan Magani. That skips over a number of smaller attacks where one or a handful of Christians were killed by Muslims. According to their database there have been dozens and dozens of religiously motivated attacks by Muslims against Christians, often at worship, just in this year alone. You rarely hear anything about the attacks apart from occasional brief mentions in passing.

Not because this attack was more horrible than the others. The only reason this is getting so much attention is because of the alleged perpetrator and the victims. A white guy angry at mass immigration shooting non-white Muslims is tailor made for the media. It reinforces all of their prejudices and biases. For all of their talk about diversity and inclusivity, it just isn't very interesting when non-white Christians are hacked to death, shot, stoned or blown up by Muslims in Africa or Asia or the Middle East. Dead black or brown people are just not that important when killed by another black or brown person. But in a western nation like New Zealand where the attacker is a white guy (regularly described as a short white guy) and the victims are Muslims is perfect for pushing the narrative of the dangers of "white supremacy" and gun ownership.

Of course the media won't mention that New Zealand already has pretty strict gun laws, including some of the same stuff that liberals claim will stop these sorts of attacks if enacted in the U.S.. This is a coordinated effort to push a singular agenda.

Remember whenever a Muslim commits yet another atrocity, whether a bombing or driving a truck into a crowd or shooting up a nightclub or systematically grooming young white girls for rape gangs, the media and talking heads come out of the woodwork to remind us that not all Muslims are terrorists ( #NotAllMuslims ). When a white guy attacks Muslims though? It is an indictment of any white person that speaks up about mass immigration. The double-standard is obvious. No Muslim is ever culpable when a Muslim commits an atrocity but all white men are culpable when any white man commits an atrocity. It doesn't matter that the ratio is wildly skewed toward Muslims killing non-Muslims, only the narrative matters.

As the forces of globalism continue to force people from incompatible cultures together and then choose one side to vilify and another to lionize, it is inevitable that this will cause conflict. That is not a justification for violence in any way. It is simply true and has been going on for as long as mankind has come into contact with other cultures. Muslims have been butchering other Muslims for centuries. Christians have done the same. Singing the song from the Coke commercial doesn't change human nature and the experiment with mass multiculturalism is unraveling before our eyes. I expect to see more and more violent incidents from both sides in the years to come. We have been in a one-sided cultural war for decades but expect to see this widen and escalate.