About two weeks ago I downloaded all of my Facebook data and deleted my account. Of course it isn't really deleted for about a month, in case you change your mind and come back.

Facebook was just a huge time suck. I met some great people and interacted with people I consider friends like Dan Edelen and Eric Carpenter. I reconnected with some high school classmates and family. But in general it was a waste of time. Then when you consider that Facebook is selling your data and serves mostly as a platform to shove ads in your face all day, plus the very serious privacy concerns, I decided to let it go. I really don't miss it at all.

Then today I saw news that reconfirmed my decision:

Facebook and Instagram are expanding their ban on white supremacy on their platforms, almost two weeks after a shooter associated with such ideology committed the worst terror attack in New Zealand history and livestreamed it on Facebook.

"We're announcing a ban on praise, support and representation of white nationalism and separatism on Facebook and Instagram, which we'll start enforcing next week. It's clear that these concepts are deeply linked to organized hate groups and have no place on our services," the company announced in a post on its newsroom site on Wednesday.

"But over the past three months our conversations with members of civil society and academics who are experts in race relations around the world have confirmed that white nationalism and separatism cannot be meaningfully separated from white supremacy and organized hate groups," the statement said. "Going forward, while people will still be able to demonstrate pride in their ethnic heritage, we will not tolerate praise or support for white nationalism and separatism."

"Experts in race relations". I bet. I would love to see who that included, I can guarantee that no one anywhere on the right was consulted and the oft discredited SPLC was.

One doesn't have to be a "white nationalist" to recognize that this is a troubling issue because Facebook is choosing sides. According to Facebook, some forms of racial and ethnic separatism are perfectly fine. The article even specifically says that "Basque separatism" is OK. Basque separatism/nationalism is described as:

Basque nationalism is a form of nationalism that asserts that Basques, an ethnic group indigenous to the western Pyrenees, are a nation, and promotes the political unity of the Basques. Since its inception in the late 19th century, Basque nationalism has included separatist movements.

Basque nationalism, spanning three different regions in two states (the Basque Autonomous Community and Navarre in Spain, and the French Basque Country in France) is "irredentist in nature" as it favors political unification of all the Basque-speaking provinces.

So that sort of ethnic nationalism is just fine, but not whatever Facebook decides to lump in as "white nationalism".

Facebook won't ban group pages associated with the Nation of Islam, an avowedly black separatist and overtly racist and antisemitic group. Nor "Chicano nationalist" groups like La Raza. Pro-Israeli groups won't be touched even though Israel is an actual ethnostate. Or any other race or religious or ethnic pride group that promotes separation. Nope, just "white nationalism" and "white supremacy", two terms that your average gender non-binary obese purple-haired fruitcake working for Facebook couldn't define anyway. Just search "Nation of Islam" on Facebook and you get a ton of results. 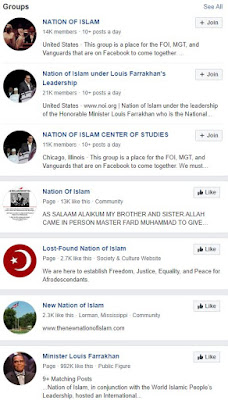 The people who work at Facebook, pulling the levers behind the curtain, are manipulating what information you see, certainly violating the privacy you think you have and selling your data to corporations so they can better market to you. It has some benefits but the negatives far outweigh them. I expect to see lots of generic conservatives like Paul Joseph Watson and Stefan Molyneux to get swept up in this even though they are not "white nationalists", simply as a way to stifle free expression.

Time to stop patronizing Facebook and delete your account. Go get on Gab and say what you want, when you want, instead of letting Mark Zuckerberg decide what is permitted.
Posted by Arthur Sido at 3:19 PM