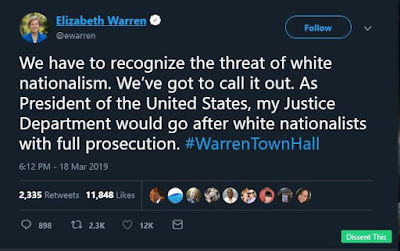 It looks like it was a series of preplanned tweets to accompany her "town hall". I am not going to bother watching any of it because it looks like a staged operation where she fielded pre-planted questions and the tweets of her talking points were pretty predictable stuff: reparations, "free" housing, "free" health care, gun control, global warming climate change, voter disenfranchisement, etc. It looks like she didn't make a single factually correct statement other than her statement about endless wars. It was just her pandering to voters and essentially bribing them with "reparations" and free stuff. But the statement in the tweet above is incredibly dangerous. Like I said, I am sure these questions and answers were all prepared ahead of time. So the language she used here is very dangerous.

If a hypothetical Warren "Justice" Department is going to "go after white nationalists with full prosecution", what does that mean? Prosecute them for what exactly? What crime is being committed? White nationalism is a political ideology, one that is pretty fringe right now. It already draws incredible levels of attention from the government. It is something of a running joke on the dissident right that half of the members of the Klan are FBI undercover agents and informers. I doubt there are any white nationalist groups of any significant size that are not riddled with informers and agents. But simply being a white nationalist is not itself a criminal act and quite the contrary is absolutely iron-clad First Amendment protected speech.

When a white nationalist does commit an actual crime, the government jumps on them with both feet. The sham show trial of James Fields is a perfect example. In fact the whole Charlottesville rally demonstrates that the legal world is already heavily tilted against any sort of white nationalism. People marching for a political cause, another clear case of First Amendment guaranteed free expression and assembly, who were set upon by violent protesters and provided no protection by the police, have been routinely prosecuted even when defending themselves while their attackers were not.

Obviously any reasonable person understands that being a white nationalist is not only not criminal but a textbook example of free speech, just as advocating for "reparations" being paid by people who never owned slaves to people that never were slaves is free speech. So I assume that like her Indian ancestry, her promise to "fully prosecute" people for white nationalism is fake. But she is appealing to her leftist base even though I am sure that Senator Warren knows that her promise is empty, completely contrary to the Constitutional and utterly immoral. She just doesn't care because she and her advisers understand the far left Democrat primary voter mindset. Tucker Carlson mentions this in his book, Ship of Fools:

A large and growing proportion of Americans under thirty, the country’s most liberal cohort, don’t believe in unfettered free speech. According to a Pew survey, 40 percent of millennials think the government should have the power to ban statements offensive to minority groups. A 2017 Cato Institute survey found that 52 percent of self-identified Democrats, of all ages, viewed government suppression of offensive speech as more important than the unfettered right to say whatever one wants.

Carlson, Tucker. Ship of Fools: How a Selfish Ruling Class Is Bringing America to the Brink of Revolution (p. 131). Free Press. Kindle Edition.

Americans, especially younger Americans, and Democrats in general, think the government should be able to suppress speech that they don't like. This is the same political party that used to screech about banning books and McCarthyism. Today the average Democrat makes McCarthy look like what the ACLU used to look like.

I am glad to see a lot of pushback on twitter but from the people Warren is trying to appeal to, there isn't any. The leftist primary voters she is trying to lure not only doesn't see this as a troubling statement, it is perfectly in line with what they believe. The average Democrat millennial voter believes that they should be given whatever they desire (college, housing, food, health care) paid for by someone else, be guaranteed a great and fun job at whatever salary they want and most of all never, ever be confronted with any ideas that might trouble them. What is the point of having a government if people can say stuff that upsets me or even worse makes me think?!

As of right now there is no chance that the Justice Department under any President would be successful in prosecuting someone for the "crime" of white nationalism but that can change and will given the trajectory we are on. It would have been unthinkable that the Supreme Court would make up a "right" for homosexuals to marry a few decades ago but now it is the law of the land and no one in "conservative" circles even talks about reversing it.

Sadly, this sort of rhetorical overreaction from Elizabeth Warren in response to the Christchurch shootings in New Zealand are exactly the sort of reactions the shooter was hoping for. He isn't American but he clearly understand the leftist mindset far better than they do and he is getting exactly what he wanted. This is pretty obvious to any observer but Elizabeth Warren and her ilk are so desperate to be President that they will make these sort of wildly un-American statements just to get a few extra votes in the 2020 primary season.