A Sadly All Too Familiar Story

I saw a story on social media the other day and it was one of those reminders of what is becoming all too common across the west.

The headlines all start off innocuously enough, tragic but short on specifics.

HPD: Husband arrested in Arkansas in connection with wife’s death 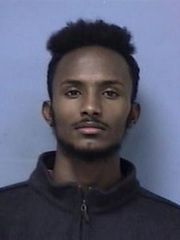 It sounds like just another case of lethal domestic violence. You know, the kind that Gropin' Joe Biden blames on "white man's culture". But as you start to look at the story, some things start to pop up. First the name of the accused: Mohamud Abdikadir. Obviously not a Scotsman. In fact you find, after several stories, that Mohamud is "a native of Somalia who moved to the United States approximately two years ago". Then you notice from some media reports that the victim was his estranged wife and that they were planning on divorcing and there were child custody issues. Then her name: Chloe Randolph Abdikadir. Her maiden name doesn't seem to be a common Somalian name. Searching Facebook for her name turns up a Chloe Randolph in Henderson, Kentucky with pictures of a baby that looks about the right age but no pictures of a father. The baby is very cute and is clearly mixed race. As you keep looking, as macabre as it is, you see that her estranged husband went by the name "Gabriel Abdikadir" on Facebook although the link to his profile is for Mohamud Abdikadir. There are pictures of him that match the mugshot photos, lots of posts complaining about "baby mamas" and pictures of the same baby so it definitely is him. Then something chilling from the news stories about this: "Following Sunday's autopsy in Louisville, a medical examiner ruled the preliminary cause of death is that her throat had been slit.". Her throat had been cut, which is pretty common among Muslims as a way of killing someone, like the recent rape and murder of two Scandinavian girls in Morocco. As Jihad Watch pointed out in an article about their murder, this is in keeping with the Qur'an: "“When you meet the unbelievers, strike the necks” — Qur’an 47:4". So this social media post was sadly ironic: 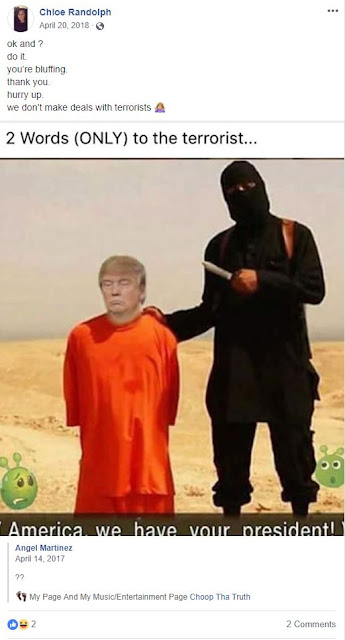 I guess the idea of some Muslim terrorist beheading the President of the United States is hilarious. But the comment below the picture was chilling, coming from "Gabriel Abdikadir" aka Mohamud Abdikadir. 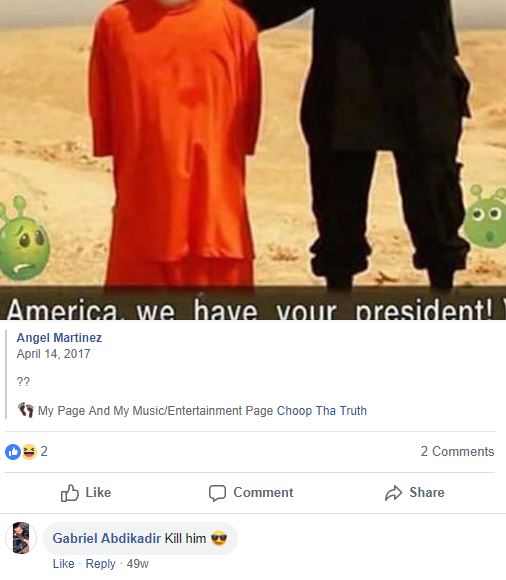 This comment from the same Somali man who would later allegedly kill his estranged wife by cutting her throat. Not so funny anymore. It was never funny to begin with. I would never have wanted someone to murder Barack Obama and I despise him. But when you post a meme laughing about the murder of the President by a Muslim terrorist and then end up murdered by a Muslim, no one is laughing. Not her crying parents, not her son who is going to spend the rest of his life with no mother and a "father" in prison.

Chloe Randolph was pretty young, just 20, but already headed for divorce and with a 9 month old baby. Her estranged husband, a Somali, is 21 but has only been in America for 2 years. I don't want to get too deep into speculation but the quickest way to citizenship for a new migrant is to marry an American.

But, but, but...Americans commit domestic violence too! Absolutely but the argument that we already have criminal behavior in America is not an excuse to import more people to commit crimes. We already have plenty of criminals here and as I pointed out in the post I linked to earlier, domestic violence is far more common among blacks and Hispanics, as is child abuse and rape. When you look at Somalis in particular you see a great deal of criminal behavior, whether in Maine or Minneapolis. The district in Mineapolis that inflicted doltish Ilhan Omar on the American Congress is "the terrorist recruitment capital of the US", as Somalis who have been given shelter from other Somalis in America seem angry and bitter about it. Somalis also are involved in other violent crimes, gang activity and sex trafficking. We already have enough criminal behavior from existing Americans that grew up in a culture based on Western law and morals, bringing in people that don't share those values and often reject them outright is a disaster.

When you invite Third World people to come live in America, they don't magically become Americans. Instead they hasten the transformation of America into the Third World. A Norwegian or Irish immigrant in the 19th century is not indistinguishable from a 21st century immigrant from Somalia or Bangladesh. Somalian culture does not have the same understanding about men and women, marriage, domestic violence, or anything else as American culture. It is time to stop importing people that will undermine our culture because forcing together people from incompatible cultures is a guaranteed recipe for conflict and eventually violence.
Posted by Arthur Sido at 11:30 AM