Vengeance Is Mine Sayeth The Feminist

Ladies and gentlemen, the Democratic Party in 2019 in a nutshell. 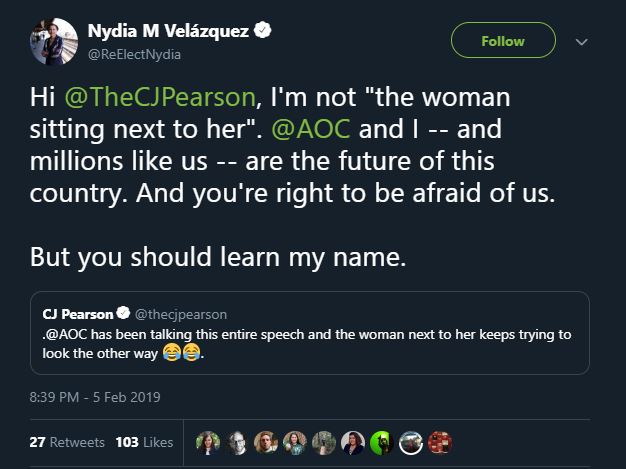 Yep, an old lady getting snippy with a teenager on Twitter, mad that he doesn't have any idea who she is but probably more angry that the pretty but dumb-as-a-stump girl next to her is sucking all of the oxygen out of the room. Someone should tell Nydia that a) no one is afraid of her and b) that at 65 she isn't the future, she is the past. Jealousy is still an ugly emotion.

I had no idea who this lady was but she looks like a pretty prototypical Democrat. Her bio on her website makes her sound like a "champion of the working class"

Nydia is the Ranking Member of the House Small Business Committee and a senior member of the Financial Services Committee.   Although her work keeps her busy, Nydia can often be found close to home, working directly with the residents of her district.

Wow, what a public servant. But it turns out she is bought and paid for by big business. From OpenSecrets.org we see this regarding the source of her campaign contributions:


Over 95% of her campaign money comes from big donors and special interest PACs and overwhelmingly from big business interests. That makes sense as she is on the House Financial Services committee. In other words, she is bought and paid for by the very industries she is supposed to be overseeing. Viva la revolution!

That is nothing new. The Democrats have become the party of globalist corporate America and the very wealthiest Americans, and no longer even pretend very hard to care about the working and middle class except for some throwaway rhetoric. Who do you think Nydia Velazquez is thinking about when she casts her votes, the working class from her district or the bankers that are writing her hundreds of thousands of dollars in campaign contributions?

Something else she says is also reflective of today's Democrats and that is the thinly veiled promise of retribution. "You're right to be afraid of us" says Congresswoman Velazquez to a teen-aged young black man. Why exactly should C.J. Pearson be afraid of her? I am guessing she didn't take the time to notice that he is black so she is just making her threats of retribution toward him because he is male. What are they so vengeful about again? Giving women the vote? Taking on the most dangerous jobs and going to war to protect women? Providing women the very best society to be a woman in, by their own standards, that has ever existed? Gee, I can see why they are so angry and vengeful. People like Rep. Velazquez should be grateful for the civilization that men have created and that they benefit from but instead we get angry screeching and threats.

The Left sure talks a big game about revenge and punishing men and remaking the nation in their own image. I wonder if they know what it will take to achieve their feminist utopia and if they are really ready to walk down that path?
Posted by Arthur Sido at 8:55 AM