They Are Called Entry Level Jobs For A Reason

There is a reason that fast food jobs are at the bottom rung of the vocational ladder. We don't expect much from the employees and fast food joints and even still our already rock-bottom expectations are usually not met. Fast food is a great place for young people to work for their first job. The jobs are designed to be idiot proof, requiring no skills or experience coming in. McDonalds has hired untold millions of teens with no job experience and taught them job basics like showing up to work, getting along with co-workers and dealing with customers. They were a great, entry level job to introduce you to the world of work. These jobs were never considered to be career positions. The vast majority of people moved out of these jobs to higher paying jobs. Some move into management at fast food joints which is a decent stepping stone to better things.

We need these sorts of jobs for people with no experience and skills. My first few jobs were in retail and I learned a ton. Sure I didn't stock dog food in most of my career working in financial services but like most people I learned about taking direction from supervisors, even when I thought they were wrong, and dealing with customers, even unreasonable and rude people.

The thing about these jobs is that in order for it to make sense to hire young people with no experience, you can't pay them much. And you shouldn't. Your pay should be commensurate with the requirements of the job and your experience. In my last corporate job my position had a salary range that was $20,000 different from top to bottom. I made the very top of the scale. Many of my co-workers made closer to the bottom. But I also had a ton of experience in the industry so I could command a higher wage (plus I came from outside the company instead of moving up which tends to get you paid better). That isn't good enough for a lot of people who think that fast food and other very low/no skill jobs should pay enough for a family to live on. Thus the ridiculous "Fight for 15" movement to demand an arbitrary raise for millions of no/low skill workers just because they thought someone should pay them more. I get wanting to make more but the way you make more is to excel in your current job, gain skills and experience and then leverage that into a better position. Such ideas seem quiant in a world where we are giving serious credence to the unicorns-and-rainbows level fantasy proposal, the so-called "New Green Deal", of jumped-up tavern wench Alexandria Ocasio-Cortez.

Now comes a new push in Sodom New York City. This brilliant idea makes it extrememly difficult to fire fast food workers: After Winning a $15 Minimum Wage, Fast Food Workers Now Battle Unfair Firings. As is typical with the Slimes Times, the headline is designed to influence the opinion before you even start reading. Notice "Unfair Firings". What makes them unfair? Well a survey of fast food workers say it is unfair. That is a scientific process!

New York City’s fast-food industry has served as a laboratory for the nation’s labor movement for the last several years.

Its workers were the first to stage rallies demanding a minimum wage of $15 an hour. Then, they pressed for changes in the way national restaurant chains set their work schedules.

Now, they are asking the City Council to shield them from being fired without a valid reason. That protection, the sort of job security that unions usually bargain for, would be a first for a city to provide to workers in a specific industry, labor law experts said.

City Councilman Brad Lander said he planned to introduce a bill on Wednesday that would require fast-food businesses to show “just cause” for firing workers and give them a chance to appeal dismissals through arbitration.

Mr. Lander, a Democrat from Brooklyn, said he was responding to surveys of fast-food workers indicating that “there’s a substantial percentage of employees that have been fired unfairly.” One woman said she was fired from a Chipotle restaurant for not smiling enough.

In a customer service industry where you are "customer facing", in other words the customer can see you (as opposed to a call center for example), smiling and being pleasant is not incidental to the job. It IS the job. In retail we were always taught that while that customer might be the 200th you saw that day, you were the first person in your job they saw. Smiling and being pleasant is the bare minimum expectation for a customer facing employee. Here are some other examples:

Princess Wright, 22, said she had worked at a McDonald’s in Downtown Brooklyn since 2014 before she was suddenly fired in November for missing a shift. Ms. Wright, who expects to graduate from Mercy College in the spring, said she had called several hours in advance of a scheduled shift to tell her boss that she was staying home to help her landlord out of a jam by babysitting.

Why that cold hearted bastard! Only in the next paragraph you read:

She argued that she had been diligent and reliable, but he cited some tardiness that she said resulted from conflicts with her classes at Mercy College.

So it sounds like she had attendance problems and then decided to skip a shift, not to care for her own child, but to babysit someone else's child. In fast food you need a certain number of people to prepare the food, take orders, clean up, etc. so when someone doesn't show up on a regular basis it screws everyone else. Read her excuse again. She was babysitting for someone else. When you don't show up so you can babysit for your landlord to help them out of a jam, it puts your boss and your co-workers in a jam instead. No wonder she was fired. Then there is this one from the photo at the top of the article, showing a melancholy Hispanic woman staring out of a window.

Francis Gomez, 26, said she was fired without warning from a Taco Bell in Queens after she swore at a delivery driver who was harassing her.

Swearing at a delivery driver seems like a no-no. Was she really being "harassed" or was she just being rude? Had she reported the harassment to her boss or HR? Or did she just fly off the handle and start cursing at a vendor? Was this a first time offense? We don't know. Since employers are very unlikely to comment specifically about employee records for liability reasons, especially to a newspaper, we just have her story and her sad face picture. Again, pretty typical storytelling from the major media, decide on your conclusion first and then fish around for examples to support your agenda.

Most employment in America is "at-will". That means I can quit at any time and for any reason and I can be dismissed at any time and for any reason. In general if you are a decent employee, you won't be arbitrarily fired because it is a pain in the butt to recruit and hire a new person. A current employee is a known quantity, hiring someone new is a gamble. Anyone that has hired has examples of people that had great resumes and interviewed well that sucked as employees. The idea that employers are firing people for no reason at all is silly. Just yesterday my Congressman tweeted out this story: US job openings jump to record high of 7.3 million. From the story:

U.S. employers posted the most open jobs in December in the nearly two decades that records have been kept, evidence that the job market is strong despite several challenges facing the economy.

The Labor Department said Tuesday that job openings jumped 2.4 percent in December to 7.3 million. That is the most since records began in December 2000. It is also far greater than the number of unemployed, which stood at 6.3 million that month.

The number of job openings is the greatest since records were kept and is more than all of the unemployed people in America. Around here every place is desperate to hire people that will actually show up, do their jobs and not be stoned. 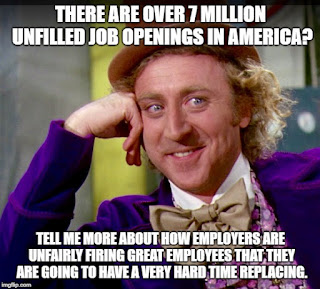 If you just read the New York times article, you might think there are lots of great employees that maybe swear at vendors or don't show up to work for things like missing scheduled shifts because of scheduled classes and babysitting for other people but are otherwise superstar employees being fired willy-nilly. However anyone who has ever hired people knows this is complete garbage. I am not saying it never happens but I am saying it rarely happens because the hassle and cost of hiring a replacement isn't worth it. If anything, mediocre and crappy employees keep their jobs longer than they should because it isn't worth it to replace them. Businesses exist to make money and hiring people is a giant cost that saps profits. Companies that stay in business don't do that.

This is another brilliant idea proposed by people that have no clue how the world works. It is similar to AOC and her genius plan to provide free money and "economic security" to people that are unwilling to work. How could that backfire? No one owes you a job and no one owes you more pay just because you want it and no one ought to be required to keep employing you if you suck as an employee. You work at a specific job in exchange for an agreed upon salary. If you think you ought to make more, great! I often did as well and I did what everyone should do: I took my resume to the job market and saw what happened. Many times I got a new job and made a lot more money. Often I found that I had overestimated my credentials and waited until a different job came open or I had more experience. I have never been dismissed from a job for poor performance but if I did it would have been my fault.

No one can afford to pay no skill workers the same as a skilled tradesman. Demanding that you do so by regulation is simply going to accelerate the move toward automation. You can already order fast food via touch-screen kiosks, smart phone apps and centralized call centers taking drive-thru orders. Keep making no/low skill unexperienced workers more expensive and you will continue to force companies to stop hiring them and use automation in their place. Then instead of no/low skill employees making commensurately low wages while gaining valuable experience, you will have no/low skill unemployed people not making anything and not gaining any experience. That sounds like a winning strategy for the economy.
Posted by Arthur Sido at 8:32 PM