The People That Would Run The Green New Deal

If the so-called "Green New Deal" envisioned by dimwit Alexandria Ocasio-Cortez ever becomes law, it will need a whole host of disgruntled, surly Federal employees to administer it from on high in the Imperial Capitol. Just imagine entire Federal office buildings staffed with grouchy paper-pushing, over-compensated Federal "non-essential" workers receiving and filing reports on the current level of cow flatulence being emitted nationwide or the number of airliners being dismantled in favor of super affordable high speed rail. Not the planes that the Politburo Congress uses to travel, those airplanes would remain of course because the Congress is all about the people's business. Oh and celebrities could keep their planes so they can travel the world spewing exhaust from their private jets to warn the peasants about global warming. And corporate jets are OK so the CEOs can flit hither and yon. Just the planes that normal people use. Those gotta go.

So I ordered on behalf of an Amish gal three floor rugs. I ordered them at the same time from Amazon, within minutes of each other because she wanted new rugs as they are hosting church on Sunday the 17th of February. I ordered them on February 5th so we had plenty of time for them to arrive. Two of the three rugs came via UPS. I ordered them and they arrived three days later like clockwork. Alas, the third rug was sent via the United States Postal Service, run by the same profit and efficiency motivated folks that would run the New Green Deal. I live in Indiana. This rug was coming from Ohio. See map and also note the location of Detroit. 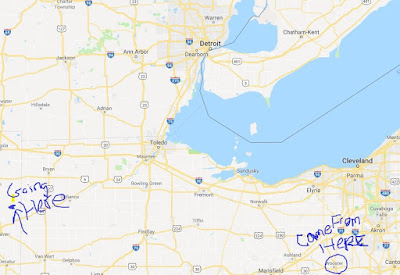 Apparently not. We started off OK... 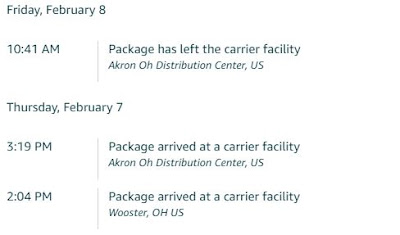 OK, so far, so good other than the 8th being the same day that the packages sent via UPS arrived. Next step.

OK, Pittsburgh is going the wrong direction but I assume it is a major shipping hub for the postal service. Next step.

Macomb is a suburb of Detroit. So not a direct transit to Indiana but I suppose we are sort of getting closer.

Uh. Now we are on Day 6 in transit and the rug is back in Pittsburgh where it was sent from some time over the weekend. Now granted I didn't major in geography in college but that doesn't seem to make much sense. Tick tock, church is this weekend. Now the update from Wednesday.

Fortunately at this point it left Detroit and ended up last night in the Fort Wayne postal distribution center, where it was transferred to our local post officer and delivered today with a few days to spare.

Ordered on the 5th

Shipped on the 7th

Delivered on the 14th

Only a week later!

Yes, I am sure that turning over all economic activity to the same people that run the Postal Service is a delightful idea.
Posted by Arthur Sido at 7:46 PM