The Libertarian Party Jumps The Shark

I was scrolling through my Facebook feed last night and came across this post from the national Libertarian Party: 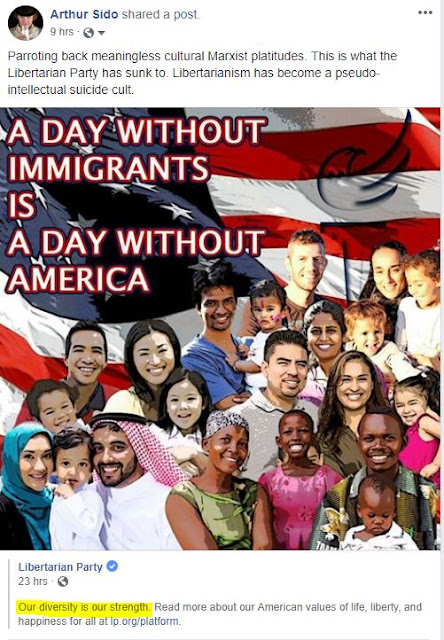 You will immediately notice that this picture shows people that appear to be of African, Middle Eastern, East Asian, Hispanic, and Indian descent. Then way in the very back we see a white couple. This is pretty ironic as I am quite certain that the vast majority of Libertarians are white. As I pointed out in a previous post, Open Border Libertarianism Is Self-Defeating, immigrants are mostly liberal voting. Somewhere around 80% of foreign born voters vote for Democrats. Conversely, at least at the national party and think-tank level, libertarianism is an overwhelmingly white. According to this post, and I haven't had a chance to investigate it, around 94% of self-described libertarians are white (also see this video from the Brookings Institution). That means that at least for the future of libertarianism, diversity is not our strength and I would argue that the more "diverse" America becomes, the less likely it is we will ever see core libertarian principles become law. Maybe some "socially liberal" policies like drug legalization but the core of libertarianism which is fiscal conservatism and limited government will never become reality and in fact will move the opposite direction. Open borders libertarianism is really not fiscally conservative at all, it is mere libertine rather than libertarian.

People from Mexico and Somalia don't come to America because they are desperate for the chance to vote for Gary Johnson and Bill Weld. They are not starry eyed over the idea of eliminating most government programs. They are coming to America because they are trying to get away from their fellow countrymen and into a country built by European settlers because it is safer and provides a welfare system. The "non-diverse" parts of our country provide "free" public schools, food aid, unemployment, subsidized housing, and all the benefits of a pre-existing advanced civilization that they can step into and benefit from immediately. They are not coming here for political liberty and they don't vote once they are able to for political liberty.

It is just nonsensical empty virtue signaling for anyone to say "diversity is our strength". It doesn't mean anything and it is far from a strength for libertarians because the more "diverse", a code word for "less white", our nation becomes, the less libertarian it will be.

The Libertarian Party, not to be confused with general libertarian voters, has turned into a pseudo-intellectual suicide cult. It spends a great deal of time pushing self-defeating measures and haughtily claiming it's moral superiority to the two major parties. Based on where it places emphasis on social media, it is little more than a goofy reflection of cultural Marxist identity politics. Case in point, another post from the LP today: 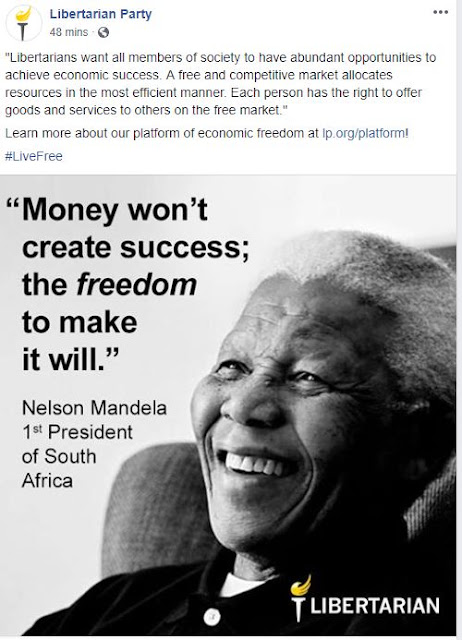 Nelson Mandela is generally thought of as a noble freedom fighter working to end apartheid. Setting aside some serious flaws in that notion, he was also at a minimum sympathetic to socialism and outright Marxism and was likely an actual communist as heart. The political party he led, the ANC, is one of three parties in the Tripartite Alliance along with the 200,000 member strong South African Communist Party. Here is Jacob Zuma, successor to Mandela, addressing the SACP in front of their flag with the familiar hammer-and-sickle of international communism. 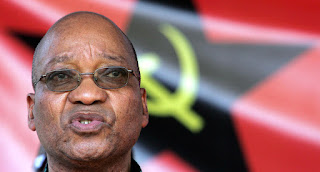 The ANC was once designated as a terrorist group. Mandela's former wife Winnie was infamous for promoting violent retribution against political enemies, including "necklacing" where a tire full of gasoline is placed around the neck of a person and set ablaze. She advocated this while still married to Nelson.

Yep, that Mandela was quite the friend of economic freedom!

We could really use a liberty loving viable third party in America. Sadly there are not any serious candidates right now.
Posted by Arthur Sido at 6:41 PM