No Thanks, We Have Already Seen Your Vision

I was sitting in my van waiting on someone yesterday and nothing interesting was on the radio so I did something I rarely do: I flipped over to NPR. No sooner did I change the station than I recognized the voice coming through my speakers. It was the Bolshevik Barbie herself, Alexandria Ocasio-Cortez. She was bring interviewed by Steve Inskeep about her "Green New Deal", a laundry list of fanciful notions powered by unicorn dreams and pixie dust. It was hilarious to listen to her, you could tell she was reading off of prepared talking points because when she talks extemporaneously on any topic she sounds like a middle school girl with an "um" or "like" every other word, but during the interview she was using big words and complete sentences. I have to assume Inskeep fed her the questions ahead of time so someone else could write her talking points and she wouldn't sound like a complete dolt. I almost felt bad for Inskeep, he has interviewed lots of serious people but now as a leftist mouthpiece working for a leftist propaganda organ like NPR he is obligated to treat AOC like an adult.

But anyway, back to her new sweeping proposal that she has dubbed the "Green New Deal", an allusion to the original New Deal that wildly increased the scale and scope of the Federal government.

At one point she was contrasting Trump's insistence on a wall with her own, um, vision.

And I think that what we have a responsibility to do is show what another America looks like.

One obvious difference is that the wall would cost maybe $25 billion over five years or something along those lines. What Alexandria Ocasio-Cortez is proposing would cost trillions in both direct costs and lost productivity. But more to the point, we don't need a former tavern wench to show us what "another America" looks like. We have ample historical and contemporary examples to work from. From China and the tens of millions killed to the Soviet Union with tens of millions more killed, not to mention the untold number of people in the USSR and Red China that were imprisoned for not getting with the Commie program, all the way to modern communist trainwrecks like North Korea, Cuba and of course Venezuela, the history of Alexandria Ocasio-Cortez's vision is a grim and bloody one. Socialism relies on coercion because once people figure out how to game the system and that working hard doesn't matter, they stop putting forth any effort and that means the government has to coerce them into doing their bidding by threats and deeds of violence. Right now there is chaos in Venezuela and it threatens to spill over into the rest of South America. Cuba and North Korea are museums testifying to the misery of people under socialism. China has a huge economy but it does so while mistreating and repressing her people to benefit the state. We know what Trump's vision of a wall of the southern border looks like, but we also know what the Alexandra Ocasio-Cortez's vision looks like:

That might seem harsh but it is true. The details of her plan, long on pie-in-the-sky idealism and short on details, are pretty silly but one line jumped out at me and everyone else with half a brain. From  Ocasio-Cortez Goes Full Communist, Demands Economic Security For Everyone “Unwilling To Work” :

Yes, you are reading that correctly. This is a screengrab from her official webpage. No surprise, the entire FAQ page has been taken down but on the internet, everything is forever.

That is not a slip up, that is what she really wants. People who are unwilling to work, in other words I could work but I just don't really feel like it, should have "economic security". So riddle me this: if I can have economic security by schlepping off to work everyday or I can have economic security by staying up late watching gun videos on Youtube and sleeping in until noon, why wouldn't I choose the latter? That line is a bare-bones description of a favorite lefty proposal, the Universal Basic Income which essentially says that every single person gets a certain level of income regardless of them doing any work to earn it. One of the most basic principles of actual economics (as opposed to whatever nonsense they taught AOC as an undergrad "economics" major) is that people respond to incentives and you get more of what you subsidize. If you pay people who are unwilling to work, pretty soon people who are willing to work will wonder why they bother and eventually they will drop out of the workforce. Fewer people working and more people getting paid to not work, what could go wrong?

There are plenty of other asinine proposals in her "New Green Deal", all of them dumb and many of them guaranteed to push us into insolvency and open warfare in the streets. The Federalist listed their top ten: The 10 Most Insane Requirements Of The Green New Deal. Besides getting rid of farting cows (yes that is the wording she used), one of my favorites was this one:

Yes, the government is going to refit every single building in the United States. How many trillions would that cost, just in the major cities alone? That goes along with getting rid of all of the internal combustion cars, to be replaced with electric cars at some enormous expense, while also making it impossible to actual produce the energy we need to charge up all of these amazing cars.

"Free college", free healthy food, guaranteed jobs except for people that just don't feel like working. The costs, something she never thinks of, would be astronomical. She has no idea how to pay for it and more importantly she doesn't care. Like a toddler in the checkout line at a grocery, they see something and they just want it. Deny them and you get a temper tantrum.

I again will fall back to my default assumption. AOC is basically an jumped-up tavern wench, someone that was elected to Congress and only afterward gave any thought to how expensive it is to live in the Imperial Capitol but seems to think that being able to split up tips at the bar qualifies her to recreate the American economy. She is often mocked for being dumb but only because she actually is dumb and is constantly saying dumb stuff. Like this: 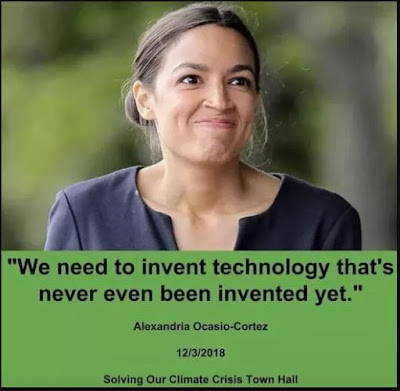 Uh, if it already existed we wouldn't need to invent it. That is what is meant when we talk about inventing something.

Yes that is an actual quote confirmed by Snopes, although Snopes as is their pattern tries to explain it away. Reminder, Snopes is not a neutral "fact checker", they are a highly partisan outfit.

But Ocasio-Cortez serves a useful purpose. As I wrote in my post An Unwitting Tank, she is a dimwit but a dimwit in a safe seat so she can blather about whatever comes into that keen mind of hers and regurgitate it without a critical thought. She says crazy crap and absorbs all of the incoming fire but meanwhile the less moronic elements of the Left are quietly moving on their own to shift us toward a socialistic future where they will rule over the hordes of miserable people from their lofty perches as technocrats in D.C. and New York.

I don't think anyone really takes her seriously, not even the sycophantic soyboys on twitter that watch the video of AOC dancing in a tight shirt on a constant loop. But she is talking, however inarticulately, about the sort of things that the Left really wants. We often forget how close the 2016 election was and how much things are going to switch demographically in the four years between 2016 and 2020. We are much closer to seeing her "vision" become a reality than we might realize. Some of us are kind of OK with that, hoping to accelerate the collapse but that is a topic for another day.
Posted by Arthur Sido at 10:34 AM