As the story of Jussie Smollett and his risible claims of being attacked by two white guys wearing MAGA hats continues to come apart at the seams, many liberals are frantically trying to erase the social media history of them jumping on this as a "hate crime" without a shred of evidence that this even happened. These same people are apparently unaware of the dozens of incidents of Trump supporters being attacked, in public and on camera, in politically motivated attacks. Or more likely they just don't care.

But the internet is forever. The internet remembers and now they are getting called out on it. Some are pushing back as if somehow the real problem is that conservatives will now use the Jussie Smollett hoax whenever a "hate crime" hits the news. As if this is the first fake hate crime. It isn't the first. Or the tenth, or the hundredth. There are tons of documented false hate crimes and the frequency has gone up since the election of Trump. Not the frequency of actual hate crimes, the frequency of false reports of "hate crimes". That hasn't stopped politicians from invoking the Rahm Emmanuel matra of never letting a crisis go to waste. Presidential wannabes Kamala Harris and Cory "Spartacus" Booker immediately used the hoax to push for new Federal "anti-lynching" legislation. No surprise they both tweeted (and both tweets are still up as of now) identical sounding blasts about Jussie.... 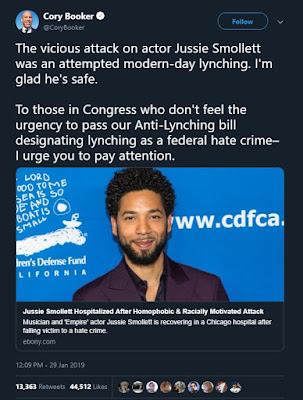 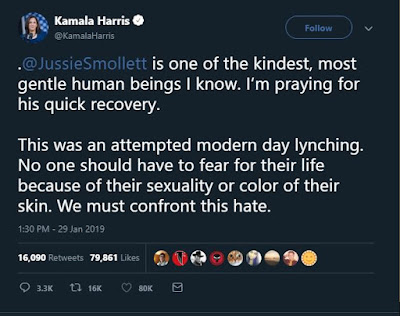 Notice the tweets are from the same day (January 29th) and less than an hour and a half apart and both called it an "attempted modern day lynching". It is almost like they were coordinated or something....

Again, even the dimmest political observer knew something smelled fishy about this from the get-go. The reports were so unbelievable that at a minimum any responsible person should have waited to comment and especially should have waited before using the incident to push for a piece of new legislation. But not Spartacus and Willie Brown's mistress. Perhaps they suspected the wheels were coming off and were trying to get this pushed through before it was exposed. Too late now.

Back to the actual law. Do we need a law making lynching a Federal crime? Lynching is a terrible crime to be certain but so are a lot of things. As far as I know it is already a crime to kill, attempt to kill or assault someone in all 50 states. There hasn't been an actual lynching in America for a very long time, which hasn't stopped a new lynching memorial from going up. Why further criminalize at the Federal level a crime that already carries the most severe penalty of any crime at the state level?

The answer is simple and quite sad. It is just garden variety racial pandering by two Senators that hope to replace President Trump. Lynching is invoked as a bogeyman to frighten blacks on a regular basis even though no one has been lynched for decades. There are not roving bands of the Klan on horseback looking for black men to lynch for whistling at white women just as their aren't pairs of Trump supporting rednecks wandering the streets of Chicago looking for semi-famous homosexual black actors to attack in the middle of the night. But many black Americans seem to think there are and don't seem to understand that they are in far more mortal danger from fellow black men than they are from any whites. Kamala Harris and Cory Booker are pushing this legislation as a way to establish themselves to black and white social justice warrior primary voters. The nomination for the Democrats will likely go to the person that is the most over the top with their leftist rhetoric and an anti-lynching bill is just the sort of thing they could point to in order to cement their identity politics street cred. I am sure that they will have no crisis of conscience because they pushed this bill using a hoax hate crime. A lie that advances the agenda and reinforces the narrative is a good thing for people like Spartacus and Kamala.

I suggested on Twitter to Cory Booker that if they want new Federal legislation, how about making it a Federal crime to falsely report a hate crime and slandering tens of millions of people based on their race and political affiliation. I doubt that bill would get Cory or Kamala as a co-sponsor.

Perhaps this constant assault is having the reverse of the desired effect. It does serve to rile up the Democrat base but it also is starting to alarm middle and working class white Americans. From the Brett Kavanaugh hearings to the slanderous attacks on Covington Catholic kids to the Jussie Smollett hoax, a lot of politically disengaged white Americans are starting to realize that the Left doesn't hate just ultra-conservative whites based on their politics, they hate almost all white people just because they are white. The Left sees the heritage population of America as an impediment to achieving their goals for remaking America into the neo-Marxist utopia they dream about. That is the reason they have been discouraging child-bearing, encouraging abortion and sexual deviancy and championing replacement immigration for decades. More and more people are starting to wake up and see what is really happening in this country. Having said that, I fear it is too late to preserve the Republic.

Jussie Smollett may or may not be charged and perhaps he even might spend some time in the Cook County jail, to the delight of the inmates. But it won't stop the spread of fake news and hoax hate crimes. Lies are just too useful a tool for the Left and since there are usually no repercussions for lying, I don't expect to see them diminish. It is up to us to hold them accountable so the vast political middle, so easily swayed, can hear the truth.
Posted by Arthur Sido at 9:02 AM