Fake Indian and genuine garden variety liberal old white lady Elizabeth Warren is trying to get the Democrat nomination by playing at being a reasonable liberal-populist. Her window of opportunity closed in 2016 when Hillary won the angry old white feminist nomination but she doesn't seem to realize it yet or she is just hoping that all of the various clowns clamoring for winning the identity politics vote will cancel each other out. Her twitter feed is all full of calls for "free" daycare and increasing the minimum wage. This was my favorite tweet. Elizabeth Warren was born in 1949 so let's be generous and use the minimum wage when she was 12. According to the U.S. Department of Labor, the minimum wage in 1961 was $1.15.hour. See screenshot of chart below. 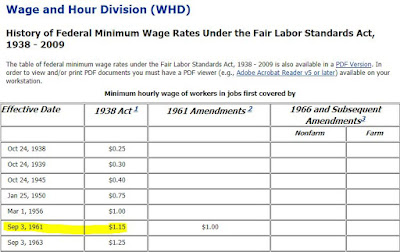 So working 40 hours per week at $1.15/hour works out to $46 per week or $2,392 per year. Was just shy of $2400/year considered a "living wage" for a family of three in 1961? Maybe but I kind of doubt it. If I am reading these goofy charts correctly, that would be below poverty level in 1961. That is because the minimum wage is intended for the very lowest skill jobs that require no experience. It isn't intended to be a permanent wage for adults to earn while starting and raising a family. See They Are Called Entry Level Jobs For A Reason.

By the way, I love the "mama and a baby" faux earthiness. It is like her saying "I'm gonna get me a beer" on New Years Eve. Do you think in a regular conversation Elizabeth Warren has ever referred to a mother and child as "mama and a baby"? Puh-leeze.

But what really stood out for me in that tweet is the way she (or her staff) subtly shift from "a family of three", which you could assume was a father, mother and child to "a mama and a baby", in other words a single parent home with no father/provider in sight. Who needs a dad around to provide for the family when Uncle Sam can shower you with free daycare, free food, free housing? This is the target voter for Elizabeth Warren, the single mom struggling to make ends meet because she bought into the feminist nonsense about "needing a man like a fish needs a bicycle" and now can't get ahead because, newsflash, in spite of the gurl-power superhero movies, women can't do it all on their own.

This is the vision of America for the Left (and a lot of the Wall Street Journal/Chamber of Commerce Republicans), a population made up of irresponsible fathers and single mothers all in the workforce with children being raised by overworked daycare employees who house our nation's children in feedlots until they get old enough to graduate to larger feedlots called public schools where they develop Lord of the Flies socialization while trying to avoid being molested by their teachers. The American people are just tax cattle and consumers. The last thing people like Elizabeth Warren wants are mothers staying home with their children so she focuses on hiking the minimum wage and subsidized daycare, not so "mama" can stay home with her "baby" but so mama can afford to pay for daycare for her baby. Of course people like Elizabeth Warren don't send their kids to subsidized day-care centers and public schools, they have the best private schools and in-home nannies (preferably an illegal immigrant so she can pay them less. You don't get to be a multi-millionaire in Congress by paying more for services than you have to!).

The ideal for the Left is a small upper-class concentrated in the urban centers made up of elites like Elizabeth Warren and a teeming lower class with as small a middle-class as possible. That lower class should make just enough to pay taxes (to fund the left's programs) and afford day-care with enough disposable income left over to buy the latest cheap crap from Wal-Mart (thus making establishment Republicans happy). But they need to have very limited upward mobility. The key is to balance being resentful enough to keep voting Democrat while not being so resentful that Elizabeth Warren finds her head on a spike. It is a perilous balancing act but I don't think that the liberal top 1% understand how riled up the masses are getting at people just like them. Fortunately for them, the vast majority of the resentful underclass is too weak or too busy killing each other to go after the ultra-rich and the people in this country with all of the guns don't generally reset the more successful. At least not for now. But when the bogeyman of the evil white man slips into minority status and the underclass realizes that their lives still suck, they are going to turn their attention on the fake populist millionaires that have been fanning their resentment and making empty promises for decades. When that happens the French revolution is going to look like a picnic.

Maybe instead of making it more "affordable" to put your kids in daycare and make minimum wage forever, we should encourage intact families, mothers staying at home with their children and employees striving to better their situation by working hard and getting relevant training. You can only run on bribing voters and stoking resentment for so long before it blows up. Start preparing now for the cross-fire when it all goes sideways. You've been warned.
Posted by Arthur Sido at 2:18 PM