Over the last few years I have observed the sudden shift of many black evangelicals who once were considered staunch theological conservatives chucking theological orthodoxy in favor of overt racialist religion, much of it barely distinguishable from Marxist "black liberation theology", which ironically has done the opposite of liberating blacks. From Ron Burns, aka "Thabiti Anyabwile" declaring he was voting for pro-infanticide Hillary Clinton to "reformed rapper" Lecrae deciding to scold the people who buys his music, a small but significant section of the evangelical world abandoned ship all at once in favor of racialism. Among the names that pop up saying ridiculous things on a regular basis, like Jemar Tisby and Kyle Howard, is Anthony Bradley. Bradley was pretty well regarded. He is a fellow at the conservative Acton Institute and wrote a few books that sold well (presumably mostly to white evangelicals). He also said in December of 2017 that white evangelicals have never had the Gospel.  Ever. A pretty bold statement that functionally declares the vast majority of evangelicals in America to be unsaved and heretics. If what you are preaching isn't the actual Gospel, it is a false gospel and Paul declared those who preach another gospel to be anathema (see the first chapter of Galatians). Since that tweet drumming all white evangelicals out of the Kingdom, his tweets have grown more shrill and less sensible. That leads to this beauty: 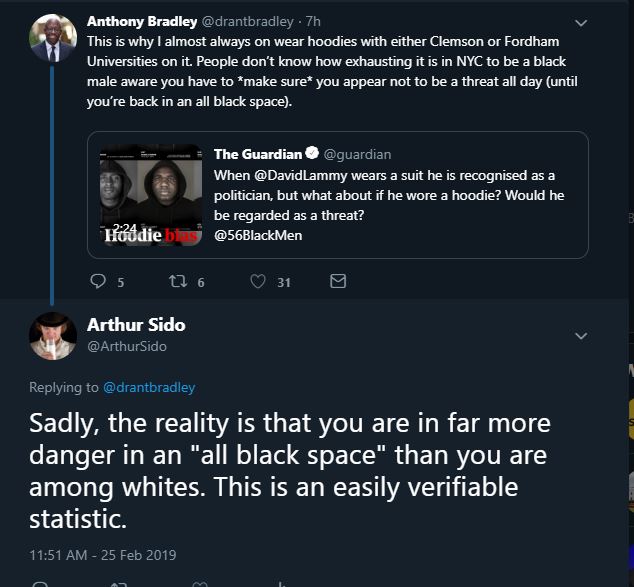 Here are a couple of basic facts.

- Blacks are 13% of the population but commit over 50% of all of the murders in the United States.

- Blacks are overwhelmingly the victims of crimes by other blacks, not whites.

Conversely, while most crime is intraracial, when it comes to interracial crime whites are far more likely to be the victims of violent crime at the hands of blacks than blacks are from whites. This in spite of whites outnumbering blacks by more than 4 to 1.

In the real world, Anthony Bradley is probably far safer in mostly white "spaces" than he is in "all black spaces". Especially somewhere like NYC where almost the only civilians with guns are gang members, who again tend to be black or Hispanic. In fact I would say that propagating this sort of misinformation is deadly dangerous to blacks who are taught to fear whites while being in more danger from fellow blacks.

According to his bio at the Acton Insitute, Anthony Bradley is a pretty well educated guy:

Oddly enough, all of the universities that Mr. Bradley has attended were founded by white men, and in the case of the religious schools he attended, according to Bradley none of them had the Gospel. Ever.

In any case, Bradley is a highly educated man who is capable of doing extensive research and therefore I assume is able to research basic facts like what I referred to above. He almost certainly knows without question that a black man is overwhelmingly more likely to be the victim of a violent crime at the hands of a fellow black man than he is from a white man. He has spent most of his professional and educational career surrounded by whites that he knows pose no threat to him. He must be aware that black men are far and away more dangerous to him as a black man than any community of whites he might find himself in, especially in a liberal, disarmed place like New York City. So why would he write something that is demonstrably false and that he knows full well is the precise opposite of reality?

The only reason I can think of is that he is signaling to his fellow black religious racialists and liberal whites. What he wrote is obviously nonsense and in fact is not only a lie but would constitute bearing false witness, which is still on the Ten Commandments list of "thou shalt not" as far as I know. Either he is lying for clicks and approval or he is so self-deluded that he actually believes this. Whichever, it makes one question why the Acton Institute keeps him on staff or why he is the chair of the religious studies program at The King's College. What does it say about The King's College, a school that proclaims itself to be "firmly rooted in the great tradition of the animating ideals of Western Civilization" while employing a man that seems to hate that tradition and the people that make it up and who regularly slanders and bears false witness against his fellow believers. Presumably the founder of TKC, Percy Crawford, would also have never had the Gospel, according to Anthony Bradley but Bradley seems fine with the pay and privilege that comes from working there.

We as a people are often scolded about our failure to have an "honest conversation about race in this country" but it seems to many of us that it is pretty hard to have a conversation that consists of a one-sided scolding from people that don't seem to mind lying when it suits them. I am more than willing to have an honest conversation about race, anywhere and anytime with anyone, but I don't think a lot of people on the other side of the conversation are interested in that at all. That is too bad because we certainly could use one but I don't see one happening anytime soon.
Posted by Arthur Sido at 5:55 PM