Jussie Doesn't Get Off That Easily

Every person with two brain cells to rub together knew the Jussie Smollett thing was a hoax from the get-go. There have been way too many hoax hate crimes, it seems like the vast majority of "hate crime" claims are bogus, and his story was so over-the-top that it was unbelievable. Leave it to a gay actor to be such a drama queen that his story would be overly dramatic.

We weren't sure of ever seeing this, a mugshot of Jussie Smollett under arrest, but I am glad to see it. Now we will see if he actually serves significant jail time for this hoax and the alleged mail fraud for sending the "threatening letter" to himself. 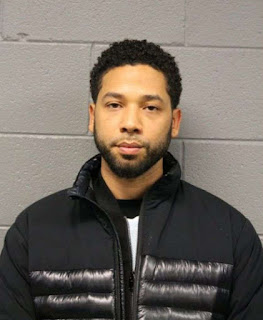 As crisis mode is activated, the story is quickly shifting as the media and the politicized Chicago police try to spin this as just Jussie trying to leverage this "attack" into higher pay because he is reportedly bitter about getting "only" $65,000 per episode.

If a white actor had claimed to have been attacked in the middle of the night by two black men wearing Black Lives Matter t-shirts while they doused him in black paint and shouted "This is Wakanda!", but then it turned out the two black men were actually white Ukrainian brothers he had paid to stage the attack, you know full well he would not have been allowed to claim he was only motivated by making more money per episode. He would be prosecuted with every crime they could make stick, hit with hate crimes charges, and he would never set foot on a TV or movie set again. Meanwhile Jussie is back at work. Roseanne Barr lost her show for an ill-advised tweet, but Jussie gets arrested for a hoax hate crime and possible Federal mail fraud and gets to go back to playing make-believe. As an added bonus he was allowed to work through his attorney to arrange a time to surrender to Chicago police, unlike Roger Stone who got the predawn SWAT team raid with weapons out and CNN conveniently on hand to film his humiliation. Ain't white privilege grand!

His staged attack was racist. Period. He spun a story of white men attacking him and included a noose to try to make it seem like the Klan was involved. He claims these men called him a nigger and a faggot and he acted outraged when people questioned him, saying on Good Morning America:

He also said he believes that he would have been taken more seriously if his attackers were Muslim or minorities.

"It feels like if I had said it was a Muslim, or a Mexican, or someone black, I feel like the doubters would’ve supported me a lot more, and that says a lot about the place that we are in our country right now,” he said.

See, we didn't believe his initial story because we are all a bunch of racist redneck crackers who hate colored folk. It wasn't because the story was so absolutely ridiculous, it was just racism. But when it turns out that the whole story was fabricated to specifically malign white people and Trump supporters, and that if the cops had come up with a couple of white guys to pin it on Jussie would have been fine with it, now we are supposed to just chalk it up to greed. To make it even more galling, Jussie is apparently still maintaining his innocence and his lawyer is complaining about a lack of "due process" even though the Chicago police have handled this as a real complaint with kid gloves from the very start. I am sure the police knew this was a load of bullcrap all along, they hear people lying everyday, but they pretended it was real until the could build the case otherwise.

I am not having it. Jussie Smollett is a flat-out bigot. Not only did he slander tens of millions of Americans for simply being white and voting for Trump but he also exposed once again that most of the media and entertainment world, and many government officials, are not only willing but eager to believe the worst of Americans. At least white Americans. So don't tell me this was about money. This was about a man who hates a large segment of the American population for no reason other than their race and political affiliation so much that he hires two other black men to stage a hoax hate crime, files a false police report, goes on TV to weep and lie about it and still is claiming he was the "victim" of a crime. This was at least as much a racial and political act as it was a financial act.

I wish he would at least own up to it and say that he did it because he hates Trump and white people so much he was willing to plan and stage a hoax in order to slander them for profit. At least I could respect his honesty if not his motivation and planning skills.
Posted by Arthur Sido at 9:37 AM