How Did Parents Raise Children Before Professional Daycare?

Look at this tweet from Commissar Senator Bernie Sanders and see if you can pick out what is missing: 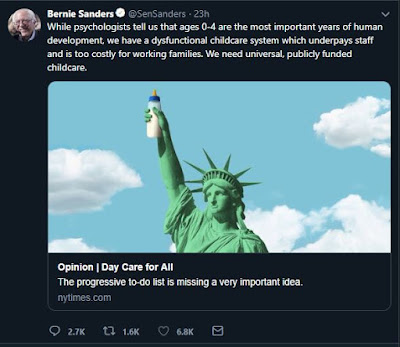 Hmmm. If the ages from 0 to 4 are the most important years of human development, shouldn't that be the time when those children are being given the very best care? I learned to read at 4 and was an accomplished reader before I started kindergarten, giving me a huge head start. So who provides the very best care to children from ages 0-4....

Hey I know, maybe the people who care the most about those children. Like, for example, their own parents! What a crazy, novel idea!

But that isn't what Comrade Bernie wants. He wants parents to trot their babies off as early as possible to some government funded baby feed lot where the kids are warehoused until they are old enough to move onto the human veal calf factories we call public schools. So what we really need are more and more mothers in the workforce so they can pay more in taxes to subsidize child-care centers for those mothers to leave their kids at so....they can go to work. It is circular reasoning. You need to work because it is so expensive to pay for daycare but you only need daycare because you have to go to work because you have to pay for daycare....

Maybe policies that encouraged parents, hopefully mothers, to stay home and raise their own kids instead of dumping them off in an institutional feed lot with dozens of other kids, might be better? But we don't want that because people like Bernie think the very worst people to raise children are the parents of that child. I happen to think the best place for a child to be raised is by their mother in their own home but that means that kids might not get the proper indoctrination.

The Left and the globalist corporate world only see people as economic units, units of production and units of consumption. A parent that is home with their child is not producing anything and therefore is not consuming as much. We didn't spend as frivolously during the decades my wife was home with the kids as we probably would have if she worked a job. We scrimped and scraped by. We didn't buy the latest electronic gadgets or new outfits and we never went to Disney world. We took vacations to my parent's place on the lake. We were not very useful to the globalist economy.

The vision of progressives is of parents working at meaningless jobs so they can pay taxes and buy cheap crap made overseas while overwhelmed day-care workers ride herd on hordes of toddlers that really, really want to be home with mom but instead are thrown into chaotic holding pens. The American people only exist to fund the government and buy the crap they are told to buy so it doesn't matter who those Americans are, just so long as they are compliant. My vision and the vision of many others is the exact opposite. For me, a culture where parents cannot afford or at least are convinced they cannot afford, to have and raise their own children is a sick and degenerate culture that needs to be burned down, no matter how many Chinese-made baubles you can buy from Wal-Mart. The marks of a healthy society are not workforce participation, subsidized daycare and quarterly profits hitting their targets. The marks are a moral people that prioritizes having and raising the next generation with an economy that works for the people instead of the other way around.

The clash between those worldviews is going to dominate the next decade.
Posted by Arthur Sido at 11:30 AM