Somali refugee turned U.S. Congresswoman Ilhan Omar is in deep doodoo. She has made some remarks that struck some as a little too close to oft repeated claims of Jewish/Israeli influence over the U.S. government and the sky has been raining fire and brimstone in her world ever since. Here are the offending tweets, I took screenshots as I expect she might eventually be forced to delete them: 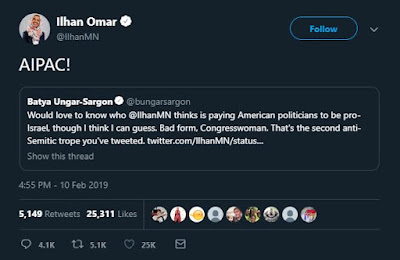 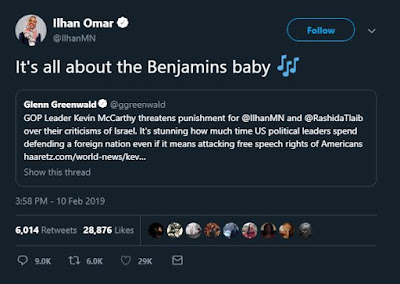 This kerfuffle has also seen a resurgence of the use of the words "tropes" and "canards" on social media. Now Ms. Omar didn't link to The Protocols Of The Elders Of Zion nor did she tweet out the "Happy Merchant" meme. But she did suggest that Republican support of Israel is because Jews are buying that support, which is part of the belief that Jews are more or less secretly running our government (and media and financial systems, etc.). The backlash has been swift and the condemnation near universal, which ironically would seem to reinforce some of the stereotypes.

Far be it from me to makes excuses for Ilhan Omar. I find her to be repulsive in no small measure because of the sheer ingratitude she shows toward the nation that took her in and the people that welcomed her when her family fled from her fellow Somalians. It should rightly concern all of us that people who hate this country are now elected officials making laws for the nation and people they hate and that they seem hell-bent on turning this nation into the very sort of country that they were forced to flee from in the first place. She is a hard-core lunatic Leftist and couples that will being an Islamist. Sure she has been married several times and gotten knocked-up out of wedlock but she also wears that hijab. The argument that she is a sort of Islamist trojan horse has some merit. In a way I kind of find this whole thing funny because it couldn't happen to a nicer gal and might wake some people up to the danger of an Islamist fifth column.

But on the other hand, she grew up in and remains steeped in a culture where Muslims hate Jews with a loathing that most of us can't even comprehend. From a young age I assume Ms. Omar has been taught to blame the Jews for all of her woes, along with America and of course white people in general. In a manner similar to how American blacks are taught to focus more on wrongs committed 150 years ago and to blame any and every problem on "white supremacy" and "white privilege", Ms. Omar seems to be the product of a culture that loathes Jews and blames them for every problem in the Islamic world, even though most of the problems in the Islamic world are self-inflicted. The Muslim hatred of Jews is deeply religious as well as ingrained in their culture, and that is a lethal combination. That is why it seems so odd that so many Jews clamor the loudest for mass migration when so many of those migrating are Muslim, and then in Europe and America they are baffled as to the rise of antisemitism. There should be a warning here for our society: when you steep young people, generation after generation, with a hatred for other races and blame them for all of your problems, it creates a dangerous environment.

But is it "anti-semitic"? I am not asking if Ms. Omar is antisemitic, just asking if what she tweeted and suggested is inherently antisemitic.

Let me lay it out. One can question the role of AIPAC, a lobbying organization that advocates for a foreign nation and dispenses money to American politicians, a group that is given an enormous amount of deference for a group that lobbies on behalf of Israel, without being anti-semitic. I have frequently questioned our relationship with Israel and have unapologetically asked why a nation that is as advanced and wealthy as Israel is getting billions upon billions in "foreign aid" from a nation that is $21 trillion in debt (see my post Foreign Aid Foolishness). I have some concerns about what I see as a one way "alliance" where America pays billions a year in aid and pledges to protect a nation while getting nothing in return. Pledging to protect Israel is one thing, pretending it is an "alliance" is another. I am likewise concerned that our unquestioning support for Israel is based in bad theology and is one of the factors working in tandem to constantly get America involved in Middle Eastern wars where we have no national security interest. That is not "antisemitic", it is simply an America First nationalist foreign policy that I support returning to.

I want to be clear here. I absolutely support the right of the Jewish people to have their own homeland and to have self-determination, a right I support for all people of every ethnicity, race and religion. I just question whether we should be giving Israel $3 billion a year in perpetuity or whether we should be sending "foreign aid" money to any nation as our own nation has crumbling infrastructure, desperately needs a wall on our southern border and oh yeah is headed over the fiscal cliff like Thelma and Louise. I have come concerns over the amount of access and influence AIPAC wields, not because they are Jewish but because they lobby on behalf of a foreign nation. I also am deeply concerned about the Chinese buying influence in Washington and groups like CAIR that come barking like a junkyard dog whenever anyone Muslim is accused of a crime. Having said that, I am an NRA member and absolutely expect them to lobby Congress on my behalf in defense of my 2nd Amendment rights. So we all have our special interest groups but only some of them are off-limits for scrutiny.

Unfortunately, having someone clearly as hostile to Jews because they are Jewish like Ilhan Omar makes it nearly impossible to have a rational conversation about these issues. When you add in advocacy groups that conflate any questioning of American policy toward Israel as "anti-semitic", it makes it worse. Furthermore, it also tends to reinforce the views of those who see a Jewish conspiracy when you see the hysteria over two tweets.

Do you truly think Nancy Pelosi and the Democrat leadership cares about antisemitism or what this crackpot representing Little Mogadishu tweeted? Of course not. Protestations against antisemitic language are just a way to keep the peace between the different identity groups that make up the Democrat coalition and Jews are fairly inexplicably one of the most reliable Democrat voting blocs. What the Left cares about is power. That is why Ralph Northam, the blackface and/or KKK hood wearing Governor of Virginia and Justin Fairfax, the rapist back-stabbing Lieutenant Governor of the same, are still in office and look like they will stay there. Right now they are hunkered down hoping something draws attention away from them. The reason they are staying in office is that if they step down over these allegations, then so should next in line for the Governorship, Virginia Attorney General (and fellow Democrat) Mark Herring who has also admitted to wearing blackface. That would lead to House of Delegates Speaker Kirk Cox becoming governor and Cox is a Republican and holding a Governorship trumps hurt feelings. So at a minimum one of these three Democrats will stay in office because again what Democrats care about is not #MeToo or racism. It is only power.

Ilhan Omar will survive this kerfuffle. The point has been made. Ironically in doing so it actually reinforces the notion that Jews are an untouchable group. How dare you say that Jews control the government and media! Now to prove you are wrong we will see the entire government apparatus jump on you with both feet and coerce a lackluster apology from you while the media covers this 24-7 and publishes endless quotes from people in power denouncing you.