President Trump nominated William Barr to be the next Attorney General of the United States, a position generally considered to be the top law enforcement post in the Federal government. Barr already had one stint as Attorney General under President George H.W. Bush and didn't exactly cover himself in glory. Looking at him as the nominee now is very troubling. 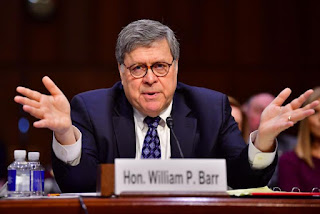 Barr was involved in the cover-up after Ruby Ridge and pushed for immunity for Lon Horiuchi, the FBI sniper that was criminally negligent, at the very minimum, in the shooting death of Vicki Weaver while she was holding her child in her arms.

As many others have reported, Mr. Barr supports the seizure of firearms via "Red Flag" laws, telling arch-gun-grabber Diane Feinstein that these laws are the "single most important thing we can do in the gun control area.". These laws allow the government to confiscate your guns if they think you might be a danger to others, even if you have committed no crime. One man, Gary Willis, has already died in an attempt to confiscate his guns without having committed any crime and expanding these laws guarantees that he won't be the last. Trying to take guns away from citizens that have committed no crime is a sure-fire recipe for both dead civilians and dead cops.

He also spoke in favor of the Brady Bill and other restrictions on semi-automatic weapons and "high capacity" magazines back in the 90s and seemed to lie about it during his confirmation hearings.

In this environment when an energized radical Left is going after guns again in an effort to disarm the American people, William Barr is the worst sort of nominee and not at all what I would expect from a President that claims to cherish the 2nd Amendment.

I sent the following note to our new Senator from Indiana, Mike Braun, and the same basic note to our other Senator Todd Young:

We are writing to you this morning to express our concern over the nomination of William Barr to be the next Attorney General of the United States. As the top law enforcement official in the Federal government, we rely on the Attorney General to protect the rights of all Americans. Unfortunately Mr. Barr has demonstrated that he cannot be trusted in that responsibility. From his actions following Ruby Ridge to his recent testimony in favor of gun confiscation, Mr. Barr has proven himself to be untrustworthy to hold the office of Attorney General and we strongly urge you to vote no on his confirmation. Our civil liberties and especially the 2nd Amendment are under constant assault and we need someone who will be a defender of our rights in the office of Attorney General, not someone with a history and testimony that indicates the opposite. We will be watching the nomination of Mr. Barr closely and again urge you to vote no on his confirmation.

Thank you for your consideration,

I would urge anyone that is concerned about their civil liberties and especially their 2nd Amendment rights to write to their Senators and urge them to oppose the nomination of William Barr to the office of Attorney General.
Posted by Arthur Sido at 9:37 AM