Then They Came For The Black Metal Labels

Now they have gone too far.

Elegy Records, the second oldest and longest running USBM record label, is closing its doors after 22 years due to social justice warriors lobbying to get them kicked off of credit card processors. The entire webstore is having a 60% off sale resulting in many classic and hard-to-find releases being available for around $4.

USBM (U.S. black metal) is pretty much a bunch of angry growling and screaming with lyrics that are specifically chosen to be offensive. Not my cup of tea, my days of listening to Slayer are long past (yes I know, Slayer is not black metal) but still it is a music genre that some people really dig. Since they are intentionally offensive, some of the bands play music that contains "hate speech". Actually all the bands probably play at least some music containing speech that is hateful, I am speaking here about the specifically designated "hate speech" that our overlords in the Imperial City have decreed verboten. That used to be fine. I don't listen to death metal, just as I don't listen to rap or hip-hop (although I would listen to death metal before rap if I had to choose). If a rapper wants to talk about slapping around women or shooting cops or how much he hates whitey, that is his business. Unfortunately in our world today, just minding your own business isn't good enough. Now we have an entire professional class of scolds that exist for no reason other than being miserable and trying to make the lives of other people as miserable as their own. From the news story:

While the end of a legendary underground label is a big enough story, there is a bigger picture regarding the fate of all labels who, past and present, have released music outside of the moral paradigm of the social justice warrior mob currently ruining all culture. Do not mistake this for an isolated incident; this is a prelude to the systematic purge of all non-politically-correct music off of the internet, which means the majority of metal as we know it will soon cease to exist.
-------
It’s terrifying to think that this could happen to any record label or merchant over “hate speech and promoting hatred” as literally all of metal does this, whether it’s hate against the government, Fascism, Christianity, men, or just people who succeed in general (though of course, none of these groups are going to whine about it.. leaving only gay communists losers, transgender mutants, and other pests with physical and mental deformities pushing this censorship). This is simultaneously the systematic unraveling of the metal underground and the American free market as we know it.

It is kind of funny to think that we are approaching an era when the Religious Right and death metal bands will be on the same side. Growing up the church ladies were screeching about Dungeons & Dragons. Now the progressive church ladies are just as irritating but they target everything and anything outside of a very small circle of "acceptable" thought, speech and expression. Can we be far off from a benefit concert featuring Keith and Kristyn Getty with opening act Abazagorath? 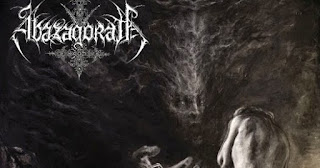 You don't have to be a fan of black metal to see the worrying pattern here and elsewhere. The progressive Left is rapidly moving to consolidate control over the internet by deplatforming, revoking website hosting, banning any naughty speech and choking off the means of funding that content producers have become dependent on.

The internet brought with it the promise of unimaginable connectivity and openness. Instant communication around the world, the open sharing of knowledge once inaccessible to the average person that couldn't afford to fly to the world's libraries. I can see the weather in Iceland or the cricket scores from India instantly and in nearly real time. I can buy a book from my couch and have it downloaded instantly to my tablet. I can watch a movie from my desk. View the artwork at the world's finest museums. The internet should be expanding access and interaction for everyone.

Instead what we see happening is a closing noose, as a few small, unaccountable groups are slowly but inexorably choking the life out of the internet by choosing what speech and political thought and religious expression is permitted and which is not. The internet is slowly transforming into a nightmare where we sit at a banquet table with the best food from around the world laid out before us but all we are allowed to eat is plain oatmeal. Post something that a purple haired fruitcake in a cubicle at Facebook High Command finds offensive and you get shut down. An unelected, untouchable priesthood can turn on the spigot of information and they can just as easily turn it off. We have become addicted to data but never realizing that people that hate many of us are in control of the stream.

Thanks to the heroic efforts of Andrew Torba and Gab, there is some light at the end of the tunnel. Alternative hosting and new workarounds for content creators to get funded are in the works. Bitcoin and other cryptocurrencies might be the future of funding, although even the ability to purchase bitcoin with regular money can be throttled.

Pay attention to the efforts to censor thought and expression. In our world private companies are just as dangerous as the government when it comes to censorship, in fact probably more so. Social media companies and tech giants can pick the winners and losers in the online world and that can make the difference in political campaigns. Sure right now it is just "far right" political thought and black metal labels but that is just the beginning. I don't want to see a future where only sanitized, approved, politically correct music is allowed to be heard on the internet just as I don't want a future where only approved political or religious speech is permitted. Freedom of speech, expression, religion, art, music, whatever is only free if it is free for everyone.
Posted by Arthur Sido at 10:32 AM