As a man, the birth canal is a pretty mysterious, confusing thing. But who knew that it was also magic?!

The state of New York passed a pretty sweeping abortion bill that, with some very broad requirements, allows women to kill their unborn child at pretty much any point in the pregnancy. Details here. Basically they are prepping for the retirement/death of Ruth Bader Ginsburg and her replacement by Trump with a solid pro-life justice that will interpret the Constitution as it is actually written. Bye-bye Roe v Wade. If Roe is overturned, abortion will return to the states where it will be a patchwork of laws. My state and many others will likely functionally ban elective abortion. States like New York will double down and become havens for women seeking to terminate their pregnancy (aka kill their unborn child) at any point and for any (or no) reason.

According to New York, something magical happens when a baby travels down the birth canal. It transforms from a euphemism into a person. One one side of the birth canal an unborn child is just a clump of cells. Six inches later that clump of cells is granted complete personhood. Amazing! This is what I wrote last night on Facebook... 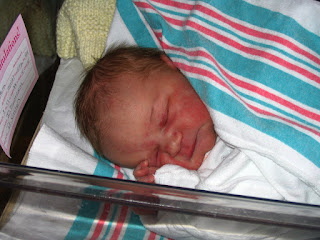 This is our youngest child Tori about twelve hours after she was born. According to the new law in New York state, it would have been legal to kill her twelve hours before this picture was taken. What was different about Tori 12 hours earlier? Absolutely nothing. But if my wife had decided for "age, economic, social and emotional factors" to kill her, it would be been OK with New York state.

As usual, the evil nature of this bill is hidden behind euphemistic language, calling it the "Reproductive Health Act". There is nothing health related in this bill, it is simply legal cover to strip away the humanity of a unique person simply because they are on one side of the birth canal instead of the other. Throughout history evil people have taken away the humanity of people they found inconvenient in order to make it easier to kill them. Today the proponents of abortion are no different.

This is why pro-abortion evangelists use euphemisms and try like crazy to avoid using any word that humanizes the child. No even marginally sane person can say why my daughter was less human and deserving of life 12 hours before that photo was taken so you obfuscate and deflect by talking about "choice".

The Democrats should just ditch the donkey as their mascot because it is clear that a different mascot is more appropriate.

Worshiping Moloch by sacrificing your kids has never really gone out of style and today Moloch is the primary deity of the progressive jihadi. Oh sure, they don't use the name Moloch anymore. They call Moloch by many new and exciting names, "Choice", "Reproductive Health", or a new personal favorite "Women’s Bodily Autonomy". Who could be against women having autonomy over their own bodies? As long as you pretend that in a situation where there are three people involved, the pregnant mother, the father and the unborn child, only the woman has any say in the issue you can get away with a system where a woman can murder her child and the father can't say anything about it but if she decides to keep her child the state will make the father pay for the child the rest of that child's life until adulthood.

The people cheering New York's new law are evil. They disgust me. They might as well have been chanting the name of Moloch and throwing children into the fire because they are no different from those that worshiped Moloch 5000 years ago.
Posted by Arthur Sido at 8:32 AM