How can you truly celebrate the new year without getting blocked by a washed up, D-list celebrity? I am pretty excited that Ellen Barkin, who apparently used to be famous, took the time to block me on the very first day of the year!

I actually had to look her up. She apparently thinks that being able to pretend to be someone else and being willing to take off your clothes in order to get a movie part makes one an authority on contemporary political issues. Anyway, what is more pertinent than some elderly actress blocking me is that she tweeted this (good thing I got the screenshot before she blocked me!) 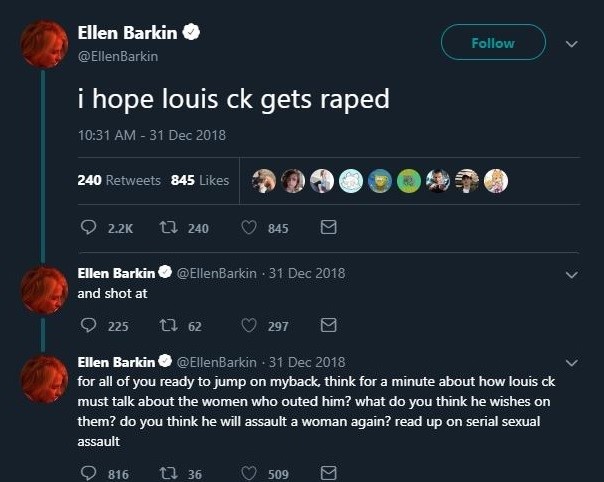 I reported the tweet yesterday, as of this morning they are still up. Shocker.

Just as I didn't really know who Ellen Barkin was, I only knew Louis C.K. from him getting caught up in  the #MeToo hysteria. I guess he is a fairly well known comedian that has won a bunch of awards and tends to be pretty vulgar. I haven't ever seen him perform. I haven't followed his story because I simply am not interested in it, so I looked it up on wikipedia and now I wish I hadn't. It seems Mr. Louis Székely, aka Louis C.K., has some weird fetish about masturbating in front of women and is accused of using his power and influence to do so in front of unwilling women. Looking at a picture of him, I assume all of the women were unwilling except his friend Sarah Silverman who is something of a skank anyway.

Obviously his behavior is pretty aberrant. Normal guys don't go around asking for permission to do that in front of random women. Even uber-freak Harvey Weinstein seemed to use his power to get women to engage is actual sex with him. But then Mr. Székely did another stand-up routine and this really got people like Barkin mad (get it, Barkin mad? Barking mad? hahahahah).

Székely in his new routine on December 31st made fun of David Hogg, the insufferable little twit that has parlayed the death of his classmates into a level of notoriety and even admission to Harvard in spite of the fact that his SAT scores were more in line with going to a state college. According to the Chicago Tribune he also bumped into some sacred cows:

C.K. also expressed dismay about new attitudes toward gender identity and the emergence of new norms for gender pronouns. He delivered a few lines with a stereotypical lisp that is sure to draw the ire of LGBT activists.

C.K. also riffed at length about "retarded" people, the difference in penis size among black, white and Asian men, and he used a gay slur in a referring to his doctor.

As the set continues, C.K. acknowledges that some of his comments will provoke controversy but he stresses he has little to lose.

Homosexuals and transvestites used to be common fodder for comedians, because men dressing up as women or men who like to have sex with other men are both funny and grotesque. This is the sort of comedy that used to be actually funny, from Eddie Murphy Raw and In Living Color. Language warning if the word "fag" gives you the vapors.


Eddie Murphy was one of the best stand-up comedians of his generation, until he started to take himself too seriously and then started doing awful movies, but that stretch when he was in 48 Hours, Trading Places, The Golden Child, Coming to America, and Beverly Hills Cop, among others, was maybe the best seven years stretch of any comedian ever. He was even good in the less well known Harlem Nights (1989) which he starred in alongside Richard Pryor and Red Foxx. His SNL skits were hilarious. But if he did that stand-up routine today, he would be censured and have to go into hiding. Comedy now is not about being funny, which often involved making people a little uncomfortable, it is about pushing the same, tired politically correct narrative.

Back to Barkin. She is fantasizing about Louis C.K. being raped and shot because he made fun of homosexuals and David Hogg and that creepy lesbian girl he always appeared with. That seems like a pretty clear violation of Twitter's terms of service. Put it another way. If conservative James Woods tweeted that he hoped that Sarah Silverman would get raped and shot, he would be permanently banned from Twitter in the blink of an eye, and most likely from every other social media platform as well. As I pointed out a couple of times last year, I got temporarily suspended from Twitter for calling a liberal woman a bimbo. If Twitter wants to suspend me for that, that is their right but the blatant hypocrisy is what galls so many people. If you are a liberal blue check-mark, you can say anything. If you are even mildly conservative and say something mildly offensive, some blue haired gender fluid freak in a cubicle at Twitter HQ will suspend you.

I expect to see this continue to ramp up in 2019 in an effort to silence or chill speech on the right leading up to the 2020 elections. The Left is not going to leave anything to chance. Of course Louis C.K. is not a conservative but the message is clear: if you like your social media platform, you better keep your speech inside the fence or you go away for good.
Posted by Arthur Sido at 10:06 AM