It Is All In The Emphasis

CBS "news" ran this story the other day:

Trump's border wall would stop less than half of illegal immigration in the U.S.

President Donald Trump has always linked illegal immigration to the southern border and the need for a wall. On Thursday — the 13th day of a government shutdown tied to the issue — Mr. Trump tweeted a video called "crisis on the border" depicting rioting migrants trying to rush into the country.

But only one-third of the recent undocumented immigrant population came to the United States through the southern border, according to the Center for Migration Studies (CMS), a New York City-based think tank. The rest came legally on work visas and stayed after they expired, according to CMS.

In other words, a wall wouldn't have kept them out.

You are supposed to glean from the article that the wall would be ineffective. It repeats the talking point that I see from a lot of low-information "liberals", that the real problem is people overstaying their visas. This overstaying visas issue was never a problem for the left before but now it suddenly is something they all repeat over and over. I guarantee that significant measures to enforce visa overstays or to even reduce the total number of visas issued would be vehemently opposed. It makes me think that these social media comment warriors are all getting talking points from a central source and the media reinforces those points. 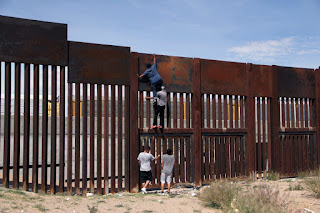 The article quotes one Randy Capps as an authority who claims that the wall is fighting an old issue. Who is Randy and what does he do? He is the "Director of Research, U.S. Programs" at the Migration Policy Institute. So who is funding this think-tank and all of their staff that produce endless reports? You can find out by clicking on the "Funders" link. Many are very vague sounding groups like "International Organization for Migration". Others are more common names like Catholic Legal Immigration Network, Inc., The Bill and Melinda Gates Foundation and the SEIU (Service Employees International Union) which represents a lot of low skill workers in industries like hotel housekeeping and janitors, which coincidentally employ a lot of migrants. It also includes Wal-Mart which is kind of funny because SEIU hates Wal-Mart. There are also a lot of governments funding this group, including our own. But the name I was looking for as soon as I started researching popped up right on cue. 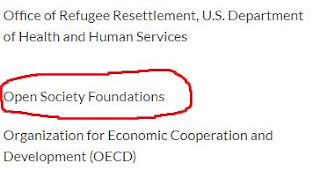 I pointed this out in a prior post, All Roads Lead To George. Open Society Foundation is the clearinghouse for enemy of Western civilization George Soros and if you find a group that is fighting for mass immigration, you can be sure that George is sending them some money.

Anyway, that tells me that Randy Capps is far from a neutral source. The article goes on to say:

Over a five-year period ending 2016, a little over half a million Mexicans illegally entered the U.S. through the southern border. That was down from 2.05 million during five years ending 2007, according to Pew.

Well that sounds great! Maybe we don't need the wall after all. Then the very next paragraph says:

While there has been an increase in Central American migrants arriving at the southern border recently, a vast majority have claimed asylum, a legal mode of immigration, said Capps.

Did you catch that? If someone claims "asylum" then these groups don't consider their entry to be illegal. So therefore illegal entry is down by like 75%! But that is not the real story. The real story is that migration from Central America is up but we pretend they are not illegal aliens because they request "asylum". Illegal aliens are coached to claim "asylum" if they get caught to help delay deportation. They are not entering the country legally and claiming asylum, they are entering illegally, getting caught and then claiming to be seeking asylum. Kirstjen Nielsen Secretary of Homeland Security stated correctly that 80% of asylum cases are not approved. So how many millions of illegal are not being counted by Randy Capps because they went through the "asylum" process? This is just simple dishonesty.

But what is really my point is that depending on how you read this story, you can come to two different conclusions.

One: We shouldn't build a wall because it would only stop between 1/3 and 1/2 of illegal aliens.

Two: We should build the wall. It will stop between 1/3 and 1/2 of illegal aliens!

No one I know thinks that building the wall is going to fix everything. I have written many times about other measure like taxing remittances and jailing people that employ illegals. But the wall is a big part of the process. No one would say: Well this cancer treatment cures between 1/3 and 1/2 of all cancer cases but not all cancer cases so we should abandon it. No, we would be grateful to have a cure for a significant chunk of cancer while recognizing there are other measures to enact. Immigration is a very complex issue and the problems we have demand a multi-faceted response. One obvious part of the plan is a physical barrier that prevents illegal aliens, human traffickers and drug mules from simply walking over the border. Will it stop all of this activity? No, of course not. But it will stop a lot of it. Bottom line: Democrats are depending on mass immigration for their electoral strategy. If the wall wouldn't help stop illegal aliens, they wouldn't be fighting it so hard.

The media spins stories like this to make a predetermined point. This is not a news piece, it is an advocacy piece designed to sway the reader into thinking the wall won't work when the article itself says it will. News can be fake news by simply changing the emphasis.