You were warned. No complaining.

So some swishy fella named "Jussie Smollett" has claimed to have been attacked while minding his own business at 2 AM on a frigid night in Chicago. The report sounded made up from the get-go with talk of white men wearing ski masks and MAGA hats in the middle of the night in Chicago, who just happened to know that he was an actor (I had no idea who he was before this week) and just happened to have a "noose" and some bleach on hand. They ambushed him and beat him up, saying "This is MAGA country" (because Chicago is a well known haven of Trump supporters), calling him a faggot and nigger. It was so over the top and we have had so many hoax "hate crimes" reported that it immediately started to draw closer examination. Of course the narrative started to fall apart almost immediately but it didn't stop the media from repeating the story (from TMZ!) as if it were completely plausible and it also didn't stop politicians from virtue signaling and calling for new "hate crime" legislation and laws against lynching (even though murder and attempted murder is already against the law in every state, as far as I know). Apparently no one in the media has learned anything from the Buzzfeed debacle and the Covington Catholic kids fiasco, or more likely they just don't care. "Why do they call us the enemy of the people?", they whine.

The Chicago police have reportedly spent untold man-hours looking into this and it seems more sketchy by the moment. They released a surveillance photo that happens to have two men in it. No sign that they are suspects, they just happen to be two men and in the general area. No MAGA hats, no nooses. In fact they look like two black men to my untrained eye but the picture is so fuzzy that the two men in the picture could be just about anyone. See below. 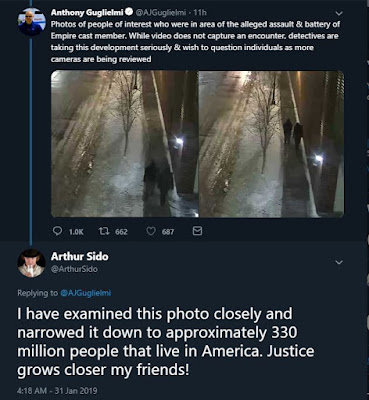 Yep, I am sure this will be the big break that blows this case wide open!

Maybe he really was attacked by two white guys and maybe it was hate motivated. I have no idea but I have a hard time believing that a fairly minor actor just happened to draw the attention of two white guys looking to "lynch" him with what was apparently a clothesline in the middle of a frigid night in Chicago. There are lot of people I don't like but you don't see me skulking around in below freezing temps in case they go to Subway in the middle of the night. In fact, were I a betting man I would bet that this whole thing disappears and turns out to be a hoax. It seems far more likely to me that this was a domestic violence situation or perhaps a tryst gone wrong than the scenario he describes. Anyway, we will see.

But who is this Jussie Smollett anyway? I saw an older tweet of his that set the irony meter off the charts. First, this is his Twitter bio... 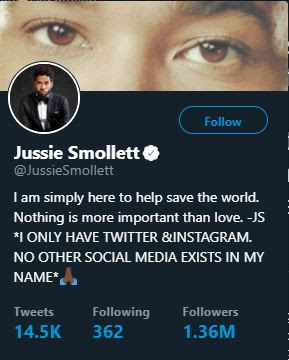 Aw, he is all about love man! Or man-love. Probably more the latter. But nothing is more important than love. Oh. Then this tweet sort of confuses me.....

Nothing is more important than love, unless I don't like your politics and then I will throw a vulgar, childish Twitter tantrum. A "bitch ass nigga". Imagine the irony of a black man calling a white man a "nigga" and also calling him a "bitch ass" since the black man in question likes being penetrated like a woman. If you were to compare Trump with his supermodel wife to Jussie with his preferences, which man has a "bitch ass"?

I know, I know. That isn't very nice but can we please stop pretending that homosexual behavior is beautiful and natural? It isn't.

Hopefully more and more people are realizing that all this crap from Leftists about "love" is just a sham. They don't love anyone but each other and they actually mostly hate each other too, just less than they hate us. Their hatred for the rest of us knows no bounds. They talk about hate crimes and toxic masculinity and hate speech but the most vitriolic hate always comes from them. Most people I know on my side of the political divide wouldn't say anything even close to that scandalous about homosexual men. Most of us have been tamed and cowed into a suicidal defensiveness, thinking that if we just keep our collective yaps shut they won't bother us. Oh please don't call me a racist or a homophobe, that would be the Worst Thing Ever! This is a lie. The radical Left wants us all on boxcars to the gulag and the last train still ends up at the gulag. Their fundamentalist blood cult is based on the notion that once they get rid of the people that created and sustained this society, all will be well. The reality is that the whole thing is going to collapse and they will still blame us for it.

So I don't know if Jussie Smollett was beat up by two homphobic white guys wearing MAGA hats or if he was getting roughed up by some random dude he met through Grindr. I also don't care. As of right now the latter seems more likely. What I do know is that black men in Chicago are routinely shot and otherwise attacked by other black men and having the cops chasing their tails looking for two mystery men that almost certainly don't exist means they aren't investigating serious crimes. A black man in Chicago is statistically speaking almost 100% more likely to be the victim of a crime at the hands of other black men than he is from a pair of MAGA hat wearing rednecks. I hope the police solve this, if there really were men who beat him up, black or white, random strangers or domestic partners, I want to see them arrested, tried and convicted if guilty. If this turns out to be a clumsy hoax, I want to see Smollett arrested and charged and convicted for filing a false police report. But either way it won't make a lick of difference in my life and it won't make a lick of difference in the lives of black men in Chicago or anywhere else. That is the truth.
Posted by Arthur Sido at 3:22 PM