Inside The Fever Swamp Of The Neocon Mind

A handful of neocons have held an inordinate amount of influence over Republican foreign policy for many years. These are the people that convinced President George W. Bush that it made sense to invade Iraq under false pretenses, an invasion that destabilized the entire Middle East, led to thousands of Americans dead and maimed, tens or hundreds of thousands of Iraqi civilians dead and created the conditions that led to the rise of ISIS. So other than that it was a pretty solid idea. They oppose any withdrawal from any conflict and seem open to starting new conflicts just for the sake of doing so and regardless of the costs. While Trump has done very little tangibly to reduce our military commitments, he has talked a lot about it and that has been enough to raise the hackles of the neocons and explains why neocons like Bill Kristol are at the core of the NeverTrump cult. Since the 2016 election they have been doing their best to out-crazy one another and yesterday Max Boot retook the lead for being the most unstable neocon with an editorial in the Washington Post: Why winning and losing are irrelevant in Syria and Afghanistan

As an aside, it is worth noting that more and more, the neocons and NeverTrumpers are only being published in leftist rags like the Washington Post and New York Times. Their twitter feeds are full of far left loons praising them. The neocons and the far left share a hatred toward Trump and a sense of disgust toward the American people. You are known by the company that you keep and for the neocons increasingly the only company they keep is the far Left. It kind of goes to show that the neoconservatives are not really conservative at all in any meaningful sense.

Back to Max. He tweeted out a link to his own article but later deleted it. You can see why from this screenshot: 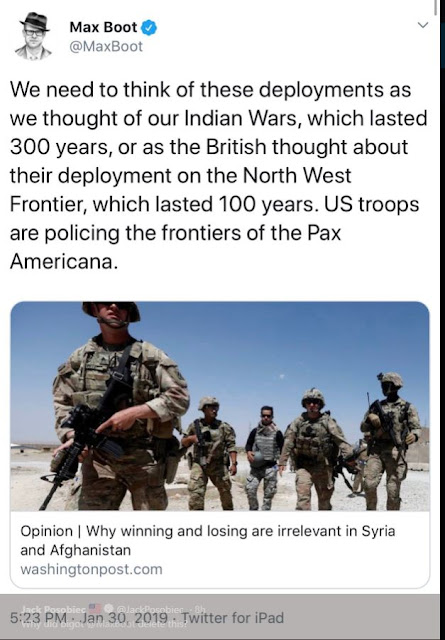 Wars that last for hundreds of years to police the borders of Pax Americana. I wasn't aware that the Pax Americana extended to literally ever corner of the earth. Max is only a few steps removed from shouting from a podium about a Thousand Year Reich with America's sons and daughters dying to protect American "interests" in Somalia and Syria.

Stop for a moment and think about this again. Max Boot, silly hat and all, is advocating for wars that we never, ever win and probably can't win. It is a recipe for endless wars where Americans are sending our sons and daughters (but not Max Boot or his ilk) to fight in wars and occupations where there is no strategic mission and no chance of victory. He even compares these "open-ended" occupations to American law enforcement: "Just as the police aren’t trying to eliminate crime, so troops are not trying to eliminate terrorism but, instead, to keep it below a critical threshold that threatens the United States and our allies." The big difference is that police are protecting actual American citizens in America, not bankrupting America to fight in wars overseas. The vague warnings about "fighting them over there instead of here" no longer hold much sway. The reality is that the more we try to intervene and tinker in the Middle East and Islamic world, the worse things get. Before we invaded Iraq, the region was fairly stable. Sure the leaders were dictators but at least they kept the peace. Now we have chaos all across the region, replacing dictators with much worse. Ask Christians in the Middle East if things were better before or after the invasion of Iraq and the Arab Spring, that is if you can even find any Christians still in the Middle East.

Boot also dismisses the financial toll. He writes: "Nor are these conflicts financially ruinous: The war in Afghanistan accounts for less than 10 percent of the defense budget." That doesn't sound like much but 10% of the "defense" budget is $70,000,000,000 or around $212 for every man, woman and child in America. For my family that works out to over $2000 every year for the last 17 years, and the costs in prior years were much higher. What did my family get for the $34,000 we have poured into Afghanistan?

In other words, for what we spend in Afghanistan in a single year, $70 billion, we could build a wall on our southern border three times over and we have been spending that amount for 17 years. I am not a math wizard but I think that $70 billion times 17 years is $1,190,000,000,000. Yep, a total cost $1.2 trillion with a "t" dollars or around $3600 per person. I know that number is almost certainly not accurate, I am just using Max's numbers. I am not sure what would qualify as "financially ruinous" if a 17 year war with a total bill over a trillion bucks that we are losing doesn't count. Make no mistake, we are losing in Afghanistan. Even Max admits that the Taliban already control almost half of the districts in Afghanistan. The Afghan "security" forces are being slaughtered: "Afghan President Ashraf Ghani says more than 45,000 members of the country's security forces have been killed since he became leader in 2014." That is about 9,000 Afghans being killed, and that is just official security forces, every year since 2014, in a country with a population of only 32 million. Talks are close to being finalized that will lead to withdrawal of U.S. forces from Afghanistan and once we are out and no longer supporting the Afghan "government", it will immediately collapse and the Taliban will take over again. So after 17 years the situation will be the same as it was when we went in, except for the thousands of American casualties, over a trillion dollars of American money and now the people of Afghanistan will be even more pissed at us. Warfare Max Boot style!

Of course Max doesn't care about the cost, not in dollars and debt and certainly not in casualties. What use are the unwashed masses, the deplorables in fly-over country, if they are not feeding their children into the maw of the endless war machine? Propping up the corrupt Afghan government or protecting the poppy fields or whatever we are doing there is more important than securing the American border.

We are faced with a stark choice for the future of America. On one side we have an America First nationalist strategy that prioritizes American interests, securing America's borders and protecting the American people militarily, culturally and economically. It recognizes that the American government and specifically the American military exist for the protection and benefit of Americans, not to fight hundreds of brushfire wars in every corner of the globe.

On the other side we have Max Boot's vision where America is only useful as a breeding pen for new soldiers to fight in whatever war Max and his ilk can drum up next. The American people exist only to breed new soldiers and pay more taxes to fund the war machine, all while Max Boot and Bill Kristol lounge around the East Coast at cocktail parties, safe from harm and sneering at the very people they expect to pay for their wars. It doesn't matter who lives in America just so long as they are willing to send their sons and daughters to fight for the entertainment of the neocons.

It is a pretty stark choice. I have already chosen which side I am on and my side won't include goofy hat wearing Max Boot.
Posted by Arthur Sido at 8:52 AM