So a fella on Twitter with a fair number of followers shared a video that he proclaimed showed a 4 year old boy "fully operating", whatever that means, an "assault rifle". I grabbed a screenshot part of the way through the video. 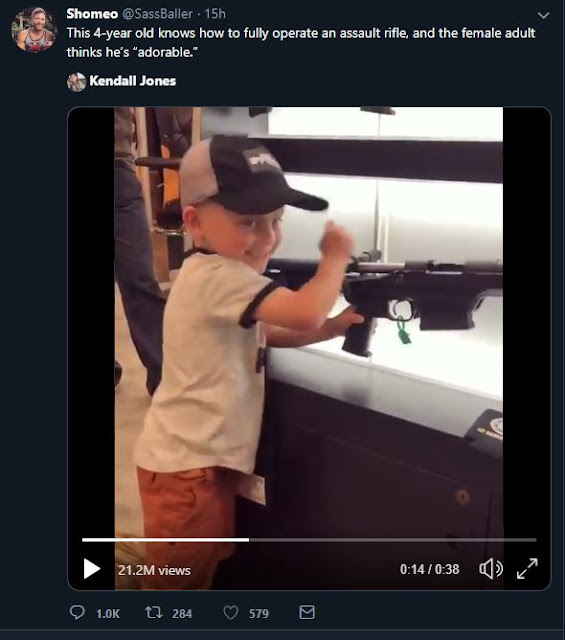 Yep. A bolt-action "assault rifle". It isn't a selective fire rifle. It isn't even a semi-automatic rifle like an AR-15, also commonly misrepresented as "assault rifles". Nope, it is a bolt-action rifle and the four year old knows how to work the bolt and eject the magazine. Not quite the same is knowing how to field strip it but I guess for "Shomeo" that counts as "fully operating".

When you look at this guy's profile, it starts to be a little more clear. 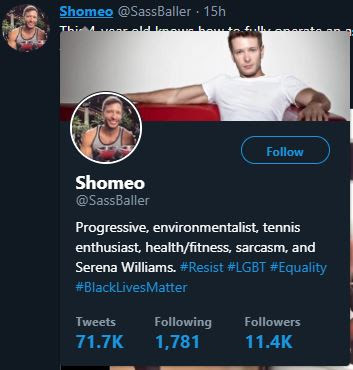 As I commented on his tweet, he should do really great when Civil War 2.0 kicks off. More likely he is going to be one of the many people dead in the first 48 hours. I hope for his sake that he has a butch boyfriend to protect him when our cities start to look like a wide-scale prison riot.

I would also point out that most of the people that I know that are gun enthusiasts, hunters and responsible firearms owners learned to safely handle guns at an early age. I had a BB gun when I was young and graduated up to a 20 gauge as I got older. I shot handguns and shotguns as a kid and started hunting when I was old enough to tromp through the grouse woods. As a result I am extremely conscientious about making sure any firearm I handle is unloaded and that I am never pointing a gun, even one I know is unloaded, at another person. You are in absolutely no danger from me even though I own a number of firearms, unless you are threatening me or my family in which case you are in mortal danger. This 4 year old is almost certainly going to grow up to be no danger to anyone that isn't a threat because he learned firearm basics at an early age.

On the other hand, people that grow up learning about guns from video games, rap videos and movies? They are the ones that are shooting each other in Chicago, Baltimore and Detroit every weekend.

A properly trained gun owners is a safe gun owner. A gay guy that thinks that a bolt action rifle is an "assault rifle" is destined for a bad end when things go south.
Posted by Arthur Sido at 11:46 AM