Book Review: Ruby Ridge: The Truth and Tragedy of the Randy Weaver Family

In August of 1992 I was a young college student and newlywed husband starting school in that brief period before my wife and I started having children. It was a time of transition in America. The Cold War was over, the first Iraq war had done a lot to invigorate American pride and we seemed headed for a time of peace and prosperity. Then suddenly the world was focused on a mountain-top in Idaho that no one had ever heard of: Ruby Ridge. Ruby Ridge and the subsequent Waco massacre led to the bombing in Oklahoma City in 1995, the aftermath of which I recall watching on the news while eating lunch on campus. These events spanning three years saw the rise and sudden death of the "militia movement". The burgeoning "patriot" movement quickly fell apart as anyone who seemed a little too extreme or had too many guns or disliked the government too much got lumped in with the OKC bombings. Since I lived through it and as a right-wing-ish political science student I watched the unfolding siege at Ruby Ridge fairly closely, I thought I knew the story but it started to dawn on me that I hadn't really looked into it as closely as perhaps I should have. So I decided to read up on the fiasco that led to the death of a Federal agent, a teen-aged boy and a woman with a baby in her arms. What follows is part book review, part rant. 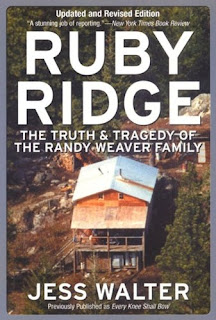 Ruby Ridge: The Truth and Tragedy of the Randy Weaver Family written by Jess Walter was the book I chose. From a decidedly partisan reading perspective, I found Walter's book to be both engaging even when slogging through some slow parts and pretty even-handed. Like most people Walter doesn't have much use for Weaver's beliefs but he also doesn't pull punches when it comes to dealing with the myriad government screw-ups. It was a pretty easy read, about three days of casual reading start to finish. There are a lot of players on the government end and Walter does a good job of keeping them distinct, although every now and then I had to think about which person was which.

The story of Randy and Vicki Weaver is not at the core about a religious nut with guns shooting at Federal agents. It is a case of an arrogant law enforcement community that sought to entrap Randy Weaver and when he refused to go along with their scheme, started in motion a chain of events that would lead to the death of a teen-aged boy, a Federal agent and a woman with a baby in her arms.

The basics of the case are this. Randy and Vicki Weaver held some pretty out there religious views and moved from Iowa to remote Idaho to wait out the coming eschatalogical apocalypse. Their religious view included an assumption that a "One World Government" would be coming for them so they tried to be as isolated as possible. While living in Idaho Randy had some contact with the Aryan Nations, a "white supremacist" group although the Weaver's should more accurately be considered white separatists. Because of this, the Feds sought to lure Weaver into committing a criminal act that they could use as leverage to force Weaver to become an informant. In reality Weaver had pretty minimal contact with these groups and, desperate for money, was entrapped by a Federal agent into sawing the barrel of a shotgun and selling it to the agent. After being arrested, Weaver was ordered to appear in court which he refused to do. At this point he was considered a fugitive and the Marshall service began surveillance on the Weaver's remote cabin. During one of the many scouting trips, marshals threw rocks to see what the Weaver's dog would do. The dog began to investigate where the men were, followed by Randy Weaver, his son Samuel and friend Kevin Harris. What happened next is in dispute but I believe the facts show that the marshals killed the Weaver's dog and this led to a gunfight in which Kevin Harris shot and killed marshal Francis Degan and Weaver's son Samuel was shot in the back and killed. The marshals retreated and the Weaver's and Kevin Harris returned to the cabin.

Thus began an 11 day siege with hundreds of law enforcement personnel, helicopters, APCs and even a shotgun armed robot. During the siege, Randy Weaver walked out to an outbuilding to see the body of his son Samuel. Thanks to the very liberal rules of engagement, FBI sniper Lon Horiuchi shot at Weaver, intending to kill him from cover. At 200 yeards Horuichi missed the fatal shot and wounded Weaver. Weaver, his daughter and Kevin Harris ran back to the cabin. Randy Weaver was a moving target at 200 yards and was trying to retreat, not shooting back. Regardless Horiuchi fired again, missing Weaver and instead striking his wife Vicki, who was holding their 10 month old daughter Elisheba in her arms, killing her instantly. Kevin Harris was also gravely wounded but recovered.

Lon Horiuchi is a highly trained sniper on the elite FBI Hostage Rescue Team. As someone who has been handling and shooting firearms since I was young, something impressed upon me at an early age by my father and hunter safety instructor is to always know where you are shooting and what is behind it. A rifle bullet that misses the target can travel a very long way. In spite of this most basic safety consideration, a highly trained Federal agent shot at a moving target as he tried to enter a home made of plywood that the agent knew contained a woman and small children. Even if Randy Weaver was standing perfectly still it was a stupid shot because a miss would hit the house. Shooting at a moving man with a house full of kids as the background is criminally negligent. It would be akin to a hunter shooting at a moving deer that was in front of a deer blind he knew kids were in. Unfortunately Lon Horiuchi never stood trial for manslaughter and is a free man to this day. Horiuchi was later involved in the controversial massacre at Waco where he allegedly was firing into the compound, which also contained women and children. I guess we are fortunate the Horiuchi's body count of civilians isn't higher.

Kevin Harris was acquitted on all charges, pretty amazing for having admittedly shot and killed a Federal agent. Randy Weaver was acquitted on most charges and spent a short stint in prison. The Weaver's later sued the Federal government and were awarded a settlement of $3.1 million.

The details are well documented in Walter's book and while he is no fan of the Weaver's, it is clear he places the bulk of the blame for much of what happened on the Federal government. He has done a great deal of research and the more you dig into the book, the more apparent it becomes that the Feds screwed up out of incompetence, inter-agency rivalry and sheer hubris. If you are looking for a "cops can do no wrong" book or a book that extols the virtues of Randy Weaver, you won't find it here, but as an even-handed treatment of the incident that will serve as a launching point that hits on critical issues like religious liberty (even when far outside of the mainstream), government power and what it means to be a free citizen in America, Jess Walter does a great job and I highly recommend his book.

Ruby Ridge, Waco and Oklahoma City form three corners of a triangle and still impact our lives today. After Ruby Ridge and Waco, the militia movement took off in America in response to what seemed to be a government out of control and all too willing to kill civilians. In 1995 the Oklahoma City bombing brought the militia movement to the forefront of American politics. The specter of the militia movement and the alleged connection to the Oklahoma City bombing still taint many right-wing groups today, from the Tea Party to the Bundy standoff. Many normal Americans think that the woods are full of heavily armed nuts looking for a building to blow up. In conjunction with highly partisan, agenda driven groups like the Southern Poverty Law Center, the law enforcement community has driven much of the right more or less underground. It is a running joke that most of the most virulent groups are mostly made up of FBI informants. From the militia movement to the Tea Party to the alt-right, whenever more extreme forms of right-wing, populist/nationalist expression have cropped up, they just as quickly seem to implode and draw the ire of the state. Not since the 60's have we seen anything similar on the Left, especially not with the frequently violent "antifa" movement. But I will say that I think that we are approaching an era when the further extremes of the right are going to become more mainstream.

Jess Walter's book on the tragic events at Ruby Ridge is a great primer on the topic and a must-read for people trying to understand the political dynamics on the extremes today.
Posted by Arthur Sido at 4:15 PM