Another Step Closer To Civil War

I don't have much to say about the Covington Catholic kids and the Indian guy banging a drum in their faces that hasn't been quite ably said elsewhere. It was a pretty predictable sequence of events that the Left has honed to near perfection. They just overdid it on this one. I wrote on Facebook:

I was going to blog about the Covington Catholic high school kids and the American Indian guy but a ton of other people already have and far more capably. This event is the same, predictable sequence we have seen over and over. The media intentionally misreports something to paint Trump, Trump supporters, white people in general, etc. in a bad light. The progressive jihadi instantly go into Two Minutes of Hate mode. Orange Man Bad! Their prejudices are reinforced and their hatred "justified".

Meanwhile more context and evidence comes out. The story falls apart. It turns out that what the media reported happening actually didn't happen that way. The accused are at least partially vindicated. We see this all the time with "hate crimes".

But it doesn't matter. The Leftist sheep are riled up. Their prejudices are reinforced. All Trump supporters are racists and Trump is inciting them. They refuse to examine the new evidence.

There is only so much of this that can happen. The name of this kid is already out there. His home address can be easily found and the school can obviously be found. Sooner or later, one of these antifa types is going to go off script a little and someone will end up dead. When that happens, all bets are off.

Sadly for the Left, there were other cameras rolling but it hasn't stopped a lot of them from just doubling down. Some, to their credit, begrudgingly apologized. Others seemed sincerely embarrassed. But what should really stick with you about this fiasco are two big points:

First, there are tons of "conservative" leaders that are completely willing to throw white Catholic school kids from Kentucky under the proverbial bus. I think part of it is that they are terrified that someone will take away their cushy gigs as talking heads and authors on the East Coast. I don't think most of them believe the stuff they say and not-so-secretly despise the people that make up the bulk of Republican voters, in the same way that Democrat leaders, Hollywood celebs and academics wouldn't be caught dead hanging around the "people of color" they pretend to care about. The fact that the kids in question were white, probably middle or upper middle class kids, that attended a private religious school in Kentucky, is not incidental to this fiasco. It is central. People like failed publisher Bill Kristol, who has already publicly daydreamed about replacing the white working class with non-white immigrants, tweeted his usual smarmy, pompous crap about this incident before deleting his tweets but the internet never forgets. The on-life-support National Review posted an essay by Nicholas Frankovich that...well read the headline for yourself...

Even without the full video evidence, that is so over the top as to be laughable for it's inaccurate take and just awful theology. National Review pulled the story, sort of apologized for it and a bunch of tweets were taken down. When NR finally goes the way of the dodo and Weekly Standard, this incident will be on the tombstone.

It was not just neocons that took shots at these kids but an awful lot of "evangelical leaders" as well, including the usual suspects like Russell Moore and Ron Burns, aka "Thabiti Anyabwile". It is painfully obvious that many both secular and religious "conservative leaders" alike are pretty disdainful of regular folks and are far more concerned with staying on the gravy train than they are being actual leaders. If we are going to survive the times that are coming, we need new leadership that is not cocooned in the belly of the beast.

The second thing that is apparent from this event is something I have been saying for a while. It is only a matter of time before someone gets killed. Over the weekend, leftists came out of the woodwork to threaten violence. A CNN contributor fantasized about punching these kids. These minors. Brain eating nincompoop Reza Azlan did the same and then doubled down by threatening to beat up Dinesh D'Souza. That is pretty hilarious because Reza looks like a complete sissy. A Hollywood type and Disney producer, Jack Morrissey, posted a tweet that of course he later said was just a joke and deleted it but again, the internet is forever.. 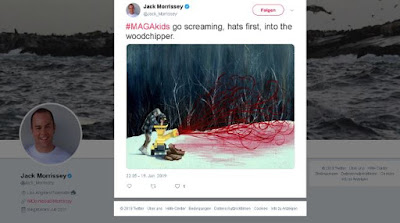 Wow that is hilarious! But the really dangerous stuff came later, like this from unhinged vulgarian Kathy Griffin that was publically calling for the MINOR kids in the video to be doxxed. 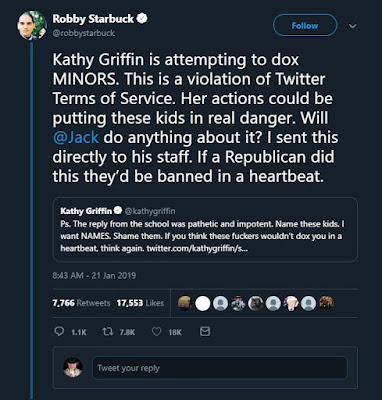 Her tweet has been reported a bunch of times, including by me. It was tweeted on the 20th early in the morning, and here we are late morning on the 22nd and it is still up. It is a clear violation of Twitter rules, and is endangering the lives of school kids. Twitter refuses to take this down but me calling a media bimbo a bimbo was cause for suspension. Covington Catholic was forced to cancel classes today because of the threats from unhinged leftists (but I repeat myself).

What happens if some lunatic gets the names and addresses of these kids and decides that they are just proto-Nazis and decides to kill them? We already had a Bernie-bro try to assassinate Republican Congressmen and school kids in Kentucky don't have the Capitol Police to guard them. If that happened, wouldn't someone be logically correct that people like Kathy Griffin are responsible and retaliate in kind? This is not some far-fetched notion. Inciting others to violence is certain to have some blowback and it seems only a matter of time before the overheated, violent rhetoric from the left leads to someone getting killed and as I said, when that happens, all bets are off.

Some of the less insane voices on the Left, people like Obama and Biden, need to step up and tamp down the violent fantasies of their followers before something awful happens and we all get caught up in it.
Posted by Arthur Sido at 10:41 AM