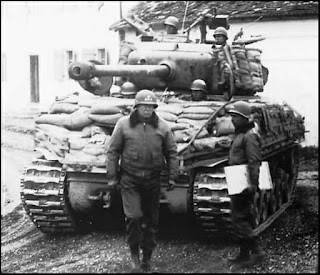 No, not that kind of tank. I am talking about "tank" as it is used in video games:

(role-playing games, board games, video games) a unit or character designed primarily around damage absorption and holding the attention of the enemy (as opposed to dealing damage, healing, or other tasks)

Yeah, that kind of tank. In video games "tanking" means being able to stay on the field while absorbing damage. This allows the rest of your team to do their thing. You usually sacrifice mobility or special abilities to maximize the tank because your only purpose is to soak up damage. In my opinion, it is one of the easiest roles in gaming. You don't have to be skilled as much as just able to not die (I am sure hardcore gamers that like being tanks will get up in arms about that). Often others are keeping you alive, trying to provide more healing/repair than incoming damage.

So who is this unwitting tank I am talking about? The latest liberal it-girl, Alexandria Ocasio-Cortez (AOC for short).
I can't recall a newly elected Congressperson getting as much attention or being the target of so much abuse before they were even sworn in. Heck she was threatening to use the power of Congress to go after Donald Trump Jr. because he was mocking her a month before she was sworn in. She is not terribly smart and has no significant life experience besides tending bar and flirting with patrons for tips (a useful skill in Congress to be sure). She says incredibly ignorant stuff and then doubles down when called out. As such she is a magnet for attention and abuse alike. Even former Democrat Senator Claire McCaskill seemed baffled at all of the attention AOC is getting:

“I’m a little confused why she’s the thing,” McCaskill told CNN. “But it’s a good example of what I’m talking about, a bright shiny new object, came out of nowhere and surprised people when she beat a very experienced congressman.”

AOC doesn't like being mocked or "dissed" or whatever kids are saying these days, calling McCaskill's comments "disappointing". Of course the usual leftist rags like HuffPo and Jezebel came out to defend AOC's honor. If there is one thing self-important leftists can't stand, it is being mocked. That is why memes infuriate them and also why they are incapable of using memes correctly. They have no sense of humor or irony and think any poke at them is a human rights violation. AOC thinks she is really smart and says like totally profound things and not agreeing with that makes her hella mad.

But as I have been thinking about it while the Democrats take control of the House and are already showing what trash they are ( Rashida Tlaib’s First Day in Congress: ‘We’re Gonna Impeach the Motherf**ker. ), it seems more likely to me that AOC is a media creation, a carefully constructed tank to serve as a damage sponge. She is so easy to mock that it is hard to pay attention to what else is going on. AOC has no idea this is happening of course. She thinks she is a serious leader when in truth she is a moderately attractive imbecile from an absolutely safe district, a socialist, a minority and a loud-mouth. I am certain none of the adults in the Democratic party take her even a little bit seriously. But she serves her purpose. People on the Republican side just pummel her for being a dolt but as I have suggested earlier, the people who are really dangerous like the ungrateful Ilhan Omar fly under the radar. I believe this is by design.

Yesterday a video went viral of AOC dancing and being silly with her friends in college. I didn't catch it at first but it looks a lot like the Breakfast Club dance scene. It was shared by some anonymous account but the replies I saw from people on the right were mostly "So what, she is in school and being silly, who cares?" but the spin was that a bunch of joyless Republicans were mocking a youthfully exuberant AOC and aren't they just awful. The whole thing smacks of a set-up. I don't think any serious conservatives care if AOC made a dance video with her friends while in college. But it generated a lot of sympathy for AOC and made her seem less like a joyless, sour-puss scold and more like a real person. Again, this was a set-up, the political version of "healing" a "tank" that is absorbing a lot of damage.

AOC will be re-elected in perpetuity unless someone that checks more boxes on the intersectional grievance list runs against her or time catches up to her and her looks fade. She can be counted on to keep yapping non-stop, drawing the fire of Republicans with no lasting effects, tanking like a boss. I doubt she will ever accomplish anything significant but that isn't really her role. The role she has been assigned, unknown to her, is that of damage sponge. I am still going to make fun of her, really how can you not, but behind her are the people pulling her strings and making the real decisions. Those are the people we need to really worry about.
Posted by Arthur Sido at 9:52 AM