They Don't See Genuine Sorrow, They See Weakness To Be Exploited

The entire culture war, which was functionally lost decades ago, has been marked by the Left taking a long view, working on big strategic moves, while "conservatism", riddled as it is with controlled opposition and grifters that are only concerned with maintaining their own income, has been putting out one brush fires at a time while a dozen new ones spring up. The result is that much of middle America, which if we are being honest is mostly synonymous with white middle and working class America, suddenly finds itself in a nation that has been transformed right under their noses while they were distracted with saving for the kid's college, school activities, sports and the latest baubles peddled by global corporations that are cheer-leading their replacement. Most conservatives thought listening to Rush and showing up to vote in November would be enough to preserve their country but they never seemed to grasp that their opposition was more zealously invested in their religious jihad than they could imagine. To the Left this jihad was not a once-a-year exercise in voting, it was and is an all-consuming religious that occupied their every waking moment.

A major component of this has been "The long march through the institutions". This is a strategy inspired by Antonio Gramsci and championed by Rudi Dutschke. Herbert Marcuse wrote:

To extend the base of the student movement, Rudi Dutschke has proposed the strategy of the long march through the institutions: working against the established institutions while working within them, but not simply by 'boring from within', rather by 'doing the job', learning (how to program and read computers, how to teach at all levels of education, how to use the mass media, how to organize production, how to recognize and eschew planned obsolescence, how to design, et cetera), and at the same time preserving one's own consciousness in working with others.

Marcuse wrote this around the same time I was born and the strategy marks a shift away from simply hippies protesting to one of active infiltration and co-opting. Look at what he identified: "all levels of education" and "mass media". Where are the weaponized noxious ideologies of the Left being cooked up and spread? On college campuses and in the media. It is not hyperbole to say that the "education" system at every level, the mass media and the entertainment world are completely controlled by Leftist partisans. Look at the hostility toward private schools and homeschooling or mildly conservative entertainers or the vitirol spewed at Fox News. These are examples of lonely parts of the institutions that are not (completely yet) under the control of the Left. But one major cultural institution stands out as having been, mostly, immune from the long march: the evangelical church. That is very changing very rapidly.

From the mass exodus of former Reformed black theologians like Thabiti Anybwile and Anthony Bradley away from traditional evangelical/Reformed thinking and into the "woke" racialist religious movement to the sudden shift of groups like the Southern Baptist Ethics and Religious Liberty Commission, headed by Russell Moore, and The Gospel Coalition toward echoing much the "social justice" rhetoric, at the elite levels of evangelicalism the focus is shifting away from evangelism and preserving orthodoxy towards the murky world of "social justice". What is startling to me is not that this is happening, but just how quickly it is happening. In the last 18 months things have accelerated at breakneck speed. As an example, once stalwart defender of orthodoxy Albert Mohler, president of Southern Seminary, released a report that shockingly reveals that Southerners used to own slaves! The article linked starts out with this statement in bold print:

A lack of "historical curiosity" is now a sin? I wonder how one would glean that from the New Testament? Anyway, the report (I have not read nor do I plan on spending the time to do so) looks back at what I assumed was common knowledge, that the flagship seminary founded in the Southern Baptist Convention, itself formed by many slave-owners, would also include slave owners in it's founding. That was not shocking or scandalous to me, as slavery has been illegal in the U.S. for a century and a half and as such has nothing to do with the quality of a seminary or the level of faithfulness of said seminary. Is Southern or any teacher there or Al Mohler somehow tainted by the century old history of SBTS? Of course not. Should he on behalf of SBTS apologize to people that were never slaves on behalf of people that never owned slaves? Of course not. Mohler writes:

“We must repent of our own sins; we cannot repent for the dead. We must, however, offer full lament for a legacy we inherit, and a story that is now ours.”

What exactly is he lamenting? That the people that came before him 150 years ago owned slaves, as did people all across the American South and it is worth pointing out as people did in cultures all around the world, including Africans? That 100 years ago many Southern Christians supported segregation? How is that at all relevant to the Southern Seminary of today or the last 50 years? It isn't. The mission of Southern Seminary is:

Under the Lordship of Jesus Christ, the mission of The Southern Baptist Theological Seminary is to be totally committed to the Bible as the Word of God, to the Great Commission as our mandate, and to be a servant of the churches of the Southern Baptist Convention by training, educating, and preparing ministers of the gospel for more faithful service.

So why get caught up in a fresh round of guilt-by-association? How is that serving the church or spreading the gospel? It isn't. It also gave the greenlight to the new generation of hucksters in the mold of Al Sharpton and Jesse Jackson to roll out their favorite demand: reparations. 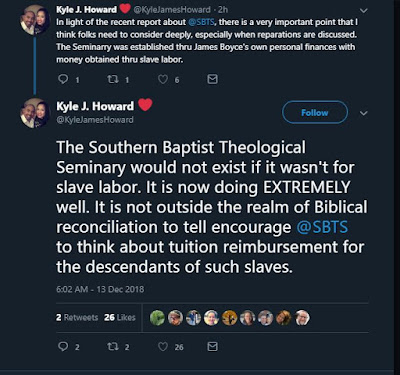 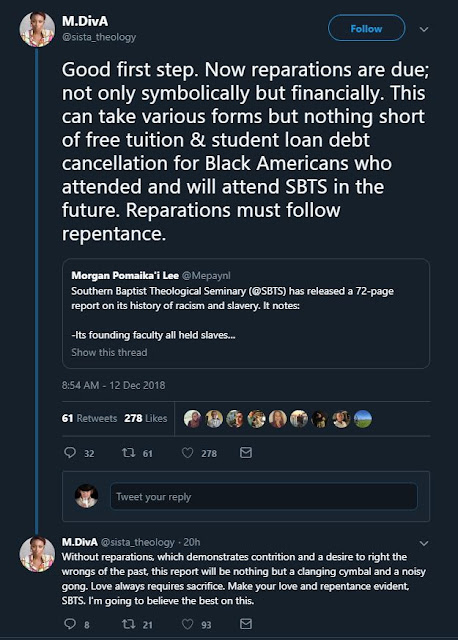 Nothing says "Sorry!" quite like giving away money! The racial grievance industrial-complex loves it when you make their job of fleecing the naive and gullible easier!

The racialist SJW Left, the hucksters and swindlers cashing in on the misery of their own people and the gullible misplaced guilt of whites, don't see acknowledgement of widely known historical facts as repentance or genuine sorrow or "an institution-wide 'honest lament' for the sins of its forebears". They see it as weakness. The respond to it like sharks to blood in the water. This was a great analogy made on Twitter:

As soon as a coin in the reparations coffer rings, a soul from white guilt springs! https://t.co/sZX4seIhT4
— Gospel-Speak (@GospelSpeak) December 13, 2018


Of course this is just a ploy, an opening gambit in negotiations ("a good first step"). A common negotiating tactic is to stake out an obviously unreasonable position and then negotiate back to what you really want. What I assume they really want are a ton of "scholarships" for "people of color", in other words not white students; endowed chairs in racial grievance studies or some other nonsense that shockingly they themselves will fill; and of course faculty and staff positions in "diversity", the less actual teaching they do the better. Look at the malarkey being demanded here. Student loan debt cancellation for black students that attended SBTS? So Southern Baptists are supposed to divert money that could go toward evangelism and mission work to pay for people that have no tangible connection to slavery to have a free ride at SBTS based on nothing other than their race?

The goal also seems to be to attract the sort of "woke Christians" that would accept a free ride based on past injustices. The people pulling the strings here don't really care about reparations or having the church be more faithful. They simply see evangelicalism as a bastion of resistance to their religious jihad and as such are bent on crushing it. Why do people still claim that the only way to save Christian denominations is to embrace women as pastors and normalize homosexuality when that has actual destroyed every "mainline" denomination where it was tried? Because the goal is eliminate resistance. The evangelical church is an outlier, the one institution that has not fallen under the complete control of the Left. It must be destroyed and based on what I am seeing it is well on the way. Some of the responses from Southern students are disheartening, to say the least. The past generations of graduates from Southern seemed like solid, orthodox ministers. The future generations look to be a much lesser breed of men.

Evangelicalism is full of men, men that I used to read faithfully all the time, who are cloistered eggheads, reading obscure works of theology in their offices, surrounded by books, and occasionally coming forth to deliver a sermon or visit someone in the hospital. They are completely disengaged from the real world. Many of them are just as disengaged from their own churches. How close are these celebrity pastor-theologians to the average member of their church? They want to read their books and write their books and give the same talk over and over at big conferences but when they are confronted with accusations of racism or sexism, they are largely at a loss. How much time and money was expended by Southern Seminary over the course of a year to produce a report that details what anyone with access to Google and Wikipedia could have figured out in twenty minutes of research? Southern Baptists used to own slaves? What a shocking revelation!

The lesson here for anyone paying attention is that trying to placate people that hate you is only going to encourage them.
Posted by Arthur Sido at 12:22 PM