The Riots In Paris: Coming Soon To An America City Near You! 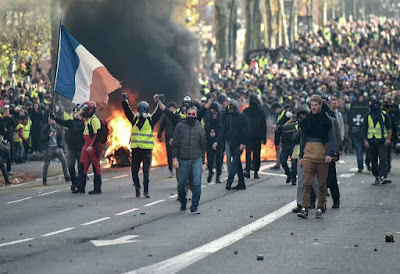 Saturday there were mass demonstrations in France yet again as a whole host of resentments continues to cause the people of France to boil over in anger. Widely reported by the U.S. mainstream "media" as protests against a new gas tax, the reality on the ground is much different. This quote from a BBC report, France fuel protests: Tear gas fired in clashes in Paris, struck me as especially important:

The numbers were small, just a few thousand. But across the country the cause is extremely popular. They say - quite proudly - that they are the "sans-dents", the great unwashed, the forgotten majority from the sticks. And they've had enough.

The unwashed is a term I have used in jest to describe how our overlords view the mass of the American people, those who sneer at regular Americans in Oklahoma and Alabama that shop at Wal-Mart and watch football on Sunday instead of the political talk shows. But the language also sounds a little like another term used recently in politics: deplorables. Here is the actual quote from Hillary Clinton:

"You know, to just be grossly generalistic, you could put half of Trump's supporters into what I call the basket of deplorables. Right? The racist, sexist, homophobic, xenophobic, Islamophobic — you name it. And unfortunately there are people like that. And he has lifted them up. He has given voice to their websites that used to only have 11,000 people, now have 11 million. He tweets and retweets offensive, hateful, mean-spirited rhetoric. Now some of those folks, they are irredeemable, but thankfully they are not America.

It was a typically arrogant, ugly comment from a woman who is herself grossly arrogant and ugly as a person can be. Even at the time many liberals were worried about her comment backfiring. NPR's Domenico Montanaro writing in September of 2016 said this:

Clinton's remarks, like Obama's in 2008, smacked of liberal elitism — liberals talking to liberals about a group of people they don't really know or hang out with, but feel free to opine about when talking to each other.

Exactly. Trump tweeted out about it right afterward saying: Wow, Hillary Clinton was SO INSULTING to my supporters, millions of amazing, hard working people. I think it will cost her at the Polls!

Most people probably laughed that off at the time, assuming Hillary would win in a landslide but I think her comment likely helped cost her the election. The states that cost her the election, Michigan and Wisconsin and Pennsylvania, are full of regular people that people like Hillary Clinton despise and they knew it. Obama made a similar comment with his "bitter clingers" comment but it didn't hurt him as badly. When Hillary rolled around and started in on the same theme, it woke people up. Many people voted for Trump because they genuinely were enthusiastic about him but many more voted for him to give the middle finger to people like Hillary Clinton that live lives of opulent luxury off the backs of the same people she called deplorables. The rest is history as the white working and middle class embraced the name deplorable, made it a badge of honor and sent Hillary Clinton into the trash-heap of history along with other Presidential losers.

I see some of the same language in the Paris protests. People are just trying to live their lives but dealing with the endless interference from an arrogant ruling class, raising taxes, importing migrants by the millions, all while telling the unwashed "sans-dents" that it is for their own good. They finally get fed up and all of the anger and resentment they have been bottling up for years breaks free. What happens when that occurs here in the United States?

France is a largely disarmed nation of 67 million people. America is a nation of over 330 million people and much of that population is heavily armed. Not just with hunting rifles or shotguns but semi-automatic rifles with 30 round magazines and handguns. Tens of millions of them. Gun control is such a hot button issue for the Left not because of gun crime, which is overwhelmingly concentrated in minority communities, but because the same "deplorables" that they hate and don't understand also own a crap-ton of guns and ammo. For right now the American middle and working class is under the illusion that they still live in a Constitutional Republic and their votes still count but that illusion might be shattered soon. As elections that are won at the ballot box are overturned by elections officials and courts and potentially the lawfully elected President of the United States getting impeached by the crowd of dolts and bartenders newly elected as Democrats in the House, the notion that most Americans are free, self-governing people will disappear. Then what will happen?

There was an interesting juxtaposition in the media this week for me. The local news channel ran a story about a sheriff in Lake County, Indiana pushing to buy an armored vehicle for his local police department. The sheriff claims he needs it to "protect" the people:

I am not sure what sort of "natural disaster" would require an armored vehicle to deal with, and there has never been a terrorist attack in Lake County that I am aware of. However the militarization of American police departments has been an ongoing issue. It was only a few years ago that the riots in Ferguson, Missouri were met with police dressed up in military garb and riding around in armored vehicles, pointing guns at protesters and rioters alike. While the "hands up, don't shoot" narrative was shown to be a lie, the police response was still deeply troubling and images like these filled the news. 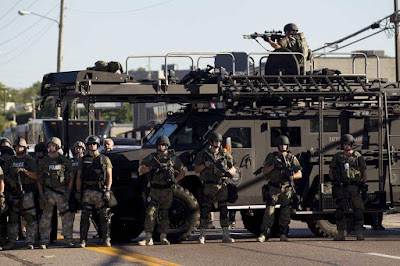 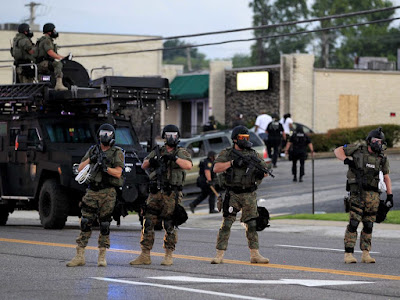 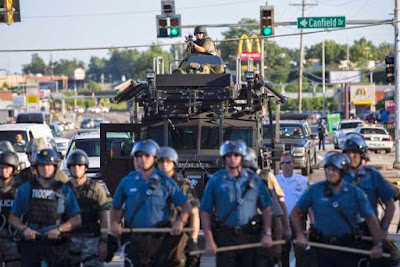 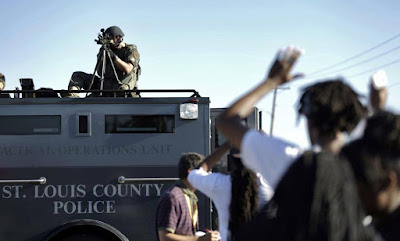 Ferguson helped to start a national conversation about the militarized police. For example this post from generally pro-police Fox News, Tanks? Grenade launchers? Police stocking up on military's gear giveaway. From the article:

From California to Connecticut and several states in between, local police departments have been steadily arming themselves over the years with billions of dollars' worth of military-grade equipment -- including grenade launchers, helicopters and machine guns.

The materiel comes from a U.S. military program that, until this week, received little public attention. But after St. Louis police used heavy-duty equipment in putting down riots and protests following the shooting death of an unarmed teen, new questions have been raised about where this gear is coming from.

The flood of equipment being funneled from the Department of Defense to local police departments traces back to a program created in the 1990s. The excess property program, known as 1033, was initially created to help state and local authorities in the war against drugs, and help unused military equipment find a home -- as opposed to being needlessly destroyed.

Local police with armored vehicles, grenade launchers and other military gear. Cops ditching the standard blue uniform for military style garb. Not to fight "terrorism" or help people in a natural disaster but to threaten and cow the American people. Long gone are the days of Sheriff Andy in Mayberry. These armed vehicles are not "protecting the people", they are used to intimidate the people and to protect the oligarchy.

Fast forward to 2018 and the streets of Paris. You see something similar going on. 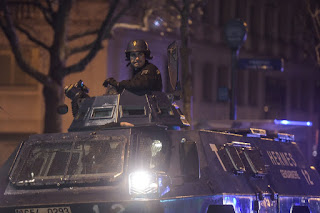 Not nearly as many guns are shown but then again the French people don't have many guns either but still lots of armored cars, militarized police (and actual military police), tear gas and water cannons. Weird that when the globalist regime of Macron uses tear gas against French people in France, no one seems to care but when Hondurans rush the U.S. border and try to enter illegally while throwing rocks, the use of tear gas is considered on par with a violation of the chemical weapons treaty violation.

Back to my original point. I think we are much closer to mass unrest than most people realize. What will happen when a heavily armed civilian population runs into a militarized police force? I don't think we want to find out but that time is probably coming. We are running headlong toward a conflict. There are few if any voices of moderation and reason on the left and using inflammatory and violent rhetoric is now not only excused but encouraged. A sitting Congressman, Eric Swalwell, openly suggested that resistance to the government is futile because after all any conflict would be short as the government has all the nuclear weapons. Yes, a member of Congress seemed perfectly OK with nuclear strikes on Americans that fail to get on board with gun confiscation. Not to be outdone, soon to be Congress-Chick Alexandria Ocasio-Cortez, fresh off six years of serving drinks and flirting with men for tips, threatened the son of the President with a subpoena because she was mad that he was trolling her with socialism memes. She might be the first person to be investigated for an ethics violation before she is even sworn in. The incoming Democrats are a clown car of Muslim women that married their brothers to swindle the immigration system to dimwit bimbos like Ocasio-Corttez but they are uniformly unhinged and about to take power. I almost pity decrepit old Nancy Pelosi who will try to keep herding these cats until the 2020 election so she can be speaker for more than two years.

As people on the right continue to get deplatformed, the rhetoric is also getting more ominous. Not just from the "alt-right" but even at mainstream publications like Townhall where Kurt Schlichter wonders How Much Blood Would Leftists Be Willing To Shed To Disarm Patriotic Americans? Collaborator publications like The Weekly Standard are shutting down, leaving America's Marshal Pétain, Bill Kristol, with only Twitter to vent his rage against the peasantry. Even the grand-daddy of all controlled opposition publications, National Review, is starting to have some second thoughts about all of this. Waving a copy of the Constitution around and shouting about "muh principles!" while your country disintegrates is no longer terribly appealing. Beltway "conservatism" has long been acting as a buffer between the majority of the population and actual radicalism. Listening to Rush Limbaugh and watching Fox News gave frustrated Americans a way to channel their outrage without actually doing anything to stop it. It just isn't enough anymore. Listening to Limbaugh used to seem subversive when there were no other outlets but now his shtick is just tired and outdated. People are tearing down the barriers erected by the Respectable-Right to keep them penned up and away from any significant action.

Watch carefully what is happening in Paris. The backlash from the unwashed and the deplorables and whatever other names they go by is just getting warmed up.
Posted by Arthur Sido at 11:48 AM