The Media IS The Enemy Of The People

The American media lies. Not occasionally or some of the time. All of the time. I am not saying everything they report is a lie but their mission is mostly to lie to us. They lie by omission, they lie by emphasizing some stories instead of others, they lie by quoting anonymous "sources" that later turn out to be completely bogus. They lie for political reasons and they almost all share the same left-wing elitist political philosophy. There are obviously independent voices still out there but increasingly they are found outside of the media and are often targeted for harassment and censorship by the media's allies in technology.

The cable news isn't even news anymore. No one under the age of 60 turns on the cable news to see what it is happening, we get the news in real time. Thirty seconds on my computer and phone tells me if anything significant is happening in the world. Cable news, CNN and MSNBC and yes even Fox, exist to provide opinion and commentary on the news, and in the case of the two former, to talk incessantly about Trump 24 hours a day. The top rated shows are all opinion shows. On Fox people tune in to watch Tucker Carlson and Sean Hannity and while they do cover the news, people are watching because they want to hear their spin on the news.

Because we live in an era of real time news, people don't read articles much anymore. They mostly just read the headlines and this is a great way to manipulate the news. Yesterday provided an informative and infuriating example. The basic story is this: a 7 year old girl named Jakelin Caal Maquin, accompanied by her father (which may or may not be true), died after an illegal border crossing and being picked up by the Border Patrol. I first saw it on Facebook in a news story on my timeline from the Detroit News. 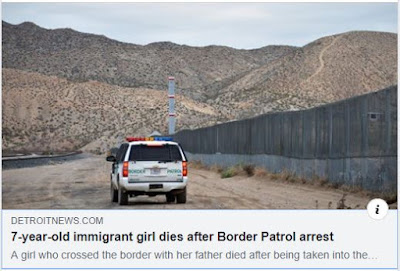 The obvious question for me was: Why would the Detroit News be reporting the death of a 7 year old in New Mexico? It is very sad but kids die all the time. I am sure at least one 7 year old probably died Thursday in Michigan or a bordering state but that doesn't make the news. This girl's death does because this death can be used to push a narrative, especially since most people only see the headline. The narrative here:

Again, based on the comments I saw from a lot of people on Facebook, all that they read was the headline, at which point they immediately leaped to accusing Trump of causing her death. Of course when you dig into the story you see that she died of dehydration and shock. You also read this:

"In a statement, Customs and Border Protection said the girl had not eaten or consumed water in several days."

So she was in border patrol custody for 8 hours but died of dehydration. That didn't happen in 8 hours, and besides it seems that she was provided food and water by the Border Patrol. Her father apparently killed her by dragging her across a desert in a bid to illegally enter the United States. That sounds harsh but it is the truth. The border patrol is already swamped by people trying to enter illegally but now apparently we need to provide full medical services, at tax payer expense, and even that didn't save this girl. Perhaps we should provide way-stations that provide food and water along the way through Mexico so those seeking to enter the U.S. illegally are refreshed when they arrive at our border?

Also worth considering. If her father was an American citizen and took his 7 year old on a thousand mile hike without adequate food and water, and she subsequently died of dehydration, the media would be (rightly) calling for his head for child abuse and murder. But instead her death is being used as a political prop. Disgusting.

Other media outlets jumped on this story. 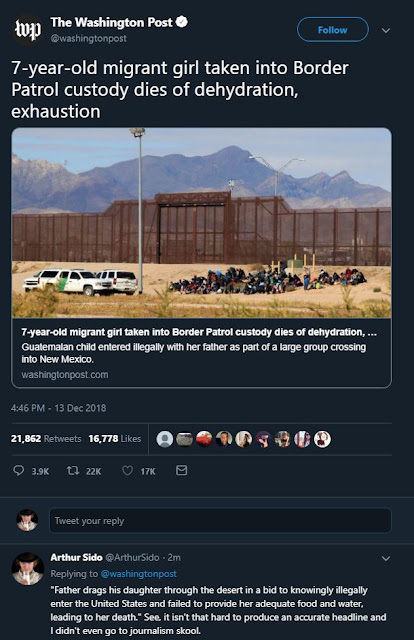 The replies were what you would expect from people that hadn't read the actual story, with a handful of people pointing out that she hadn't eaten or drank anything for days and that her father was actually to blame for her death. Later in the day, the Washington Post (Democracy Dies In Darkness!) doubled down with this: 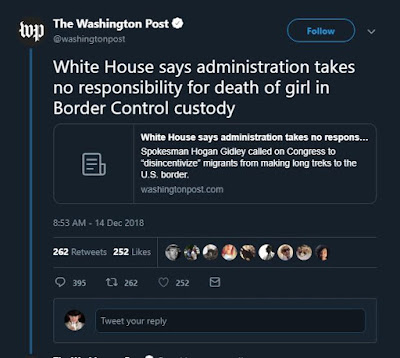 Why would the White House take responsibility for the death of a little girl that died from dehydration as the result of days of being without food and water before she even got to the U.S. border? If anyone dies anywhere in the world, is the Trump administration culpable? It is sort of the equivalent of the old gotcha question "When did you stop beating your wife?".

Re-imagine the story with some changes to the circumstances. A 7 year old boy in Chicago is caught in the crossfire of a gun battle between two rival gangs and suffers a serious gunshot wound. He is taken to the hospital where medical care is provided. Sadly he succumbs to the wounds that he suffered before he arrived at the hospital. Would any sensible person try to pin blame for the death of the 7 year old on the hospital administration? Of course not. Unless of course Trump was the hospital administrator.

Then the crocodile tears come out. This one was at the top of the landing page at Fake News HQ, aka CNN, this morning: A refugee child's death, a heartbreaking echo at Christmas penned by the repugnant Paul Begala. You probably don't even need to read it to know where this is going. Begala even points out the pertinent facts: she hadn't had food or water in days, she was given food and water when taken into custody and was airlifted to El Paso (at tax payer expense) to try to save her life but she died anyway as a result of shock and dehydration. That doesn't dissuade Begala from immediately making a ridiculous connection between this girl and her father, almost certainly an economic migrant, and, you guessed it, Jesus and Mary and Joseph.

Those of us who believe in the divinity of Christ - and the majority of Christians voted for Donald Trump--have a special duty. We need to connect the pain of that panicked Judean family 20 centuries ago to the pain of this panicked Guatemalan family today.

Joseph and Mary did not wait in line for visas during the flight to Egypt.

They did not concern themselves with the niceties and complexities of immigration law. They were refugees, seeking safety from harm.

Notice the random insertion of the line about the majority of Christians voting for Trump.

Begala makes a big deal of touting his Catholic credentials in this ridiculous essay but he is a Catholic-of-convenience. When he can rewrite and pervert the flight of Jesus, Mary and Joseph to Egypt in an era without border laws and while remaining within the bounds of the Roman empire, he is Captain Catholic. When he is helping to elect Democrats that have made infanticide an unholy sacrament, well his Catholicism gets set aside.

A little girl is dead and that is awful. I can't imagine the anguish of her parents. But she is not dead because of Donald Trump or Republicans. She is dead because her father chose to bring her along on what everyone knows is a very arduous and dangerous trek across Mexico with insufficient food and water and as a result she died from neglect. He was more than likely seeking better economic prospects in America, which I understand, but the way he chose to seek them has left his little girl dead. America must secure the border and remove the incentives that lure people into making a foolish, immoral and dangerous journey to illegally enter the United States. Build the wall, tax remittances back to foreign nations to pay for it and jail those Americans who exploit illegal labor. Do that and the problem will quickly take care of itself and people in South and Central America can be encouraged to make their own nations livable instead of literally dying to go somewhere else.
Posted by Arthur Sido at 2:16 PM