Thanks For Giving Us Our Own Money Back!

These are the sorts of news stories that drive me crazy. From our local conservative radio station, WOWO in Fort Wayne:

I am in no way anti-smoke detector or part of some shadowy alt-houseburning group sharing memes of cartoon frogs burning down houses. 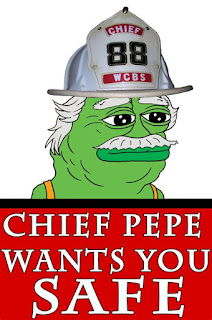 Now what gets me is this from the story:

Indiana has received more than a half-million dollars in federal funding to kick off a campaign to install 10,000 smoke detectors in homes around the state.

The State Fire Marshal’s office will use the $521,000 to install smoke detectors in the homes of high-risk populations to reduce injury and prevent fire deaths.

People always seem to get excited when their state or community gets "Federal funding". But where exactly does that Federal funding come from? Well it comes from the income taxes paid by working Americans. In other words at least a significant chunk of it comes from Indiana.

We are supposed to be grateful for getting money back that the Federal government took from us so we can buy a very common household item. If you were going to the store to buy a $10 smoke detector and someone robbed you of $30 but then gave you $10 back so you could buy the smoke detector you were planning on buying anyway, would you be grateful for that?

What is really irritating is that the half million being sent back did not start as a half-million. It probably started as a million or two. Then it sloshed around D.C. for a while, some overpaid bureuacrats did some studies that showed people in Indiana died in house fires, they did some conference calls and meetings with Powerpoint, someone in Indiana probably applied for a grant which took untold hours of paperwork explaining that people in Indiana die in house fires, that paperwork went through a different committee and finally it was approved to send back half a million dollars to buy smoke detectors which you can buy at most retail stores or at Amazon for less than ten bucks.

Federal funds don't come from a magic pot of gold at the end of the rainbow. They come from the states and then when our overlords deem it appropriate we are allowed to have some of those funds back, provided we jump through the hoops the Feds require. I can't overemphasize this point:

"Federal funds" is just a euphemism for giving us our own money back.

Maybe, and I am just spitballing here, maybe we could leave more money in Indiana and Idaho and Georgia and let the people of Indiana, Idaho and Georgia decide how best to spend those funds instead of sending the funds to D.C. where some bureaucrat gets to decide. We have smoke detectors in our house and didn't even have to get free money from the government. We just allocated some of our cash to purchase a simple, widely available and inexpensive lifesaving device.

Everyday people across America make purchasing decisions without asking the government to draw up a shopping list. I think we can be trusted to buy our own smoke detectors too.
Posted by Arthur Sido at 1:32 PM