More From The Ingratitude Files

In July we were treated with the spectacle of an angry black woman, Therese Patricia Okoumou, clambering up the Statue of Liberty to protest ICE and "white supremacy" and stuff. It was like super woke and noble and powerful. Apparently she is mad that the nation that took her in after fleeing the nation she came from (the Congo) isn't more like her home. You know, the one she fled from. Anyway, I wrote about it here: The Gratitude Is Heartwarming 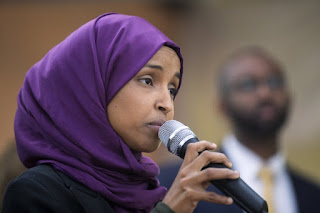 Now as the year ends we have a new article about the real media darling in the House Democratic freshmanperson class, Ilhan Omar. While dimwit and economic ignoramus Alexandria Ocasio-Cortez gets most of the attention, the Left and their media lickspittles are far more excited about Omar. She is everything the Left could want, angry and endlessly yammering about "justice". She is an immigrant, born in Mogadishu, Somalia. She is black and Muslim and will be the force behind changing House rules to allow religious headwear so she can wear a hijab on the floor of the House of Representatives. Take that white patriarchy! Now if it were a conservative white Mennonite woman challenging the House rules so she could wear a headcover, the Left would be silent or oppose it but when it is a symbol of Islamic oppression of women, it suddenly becomes a sign of empowerment.

The media is just giddy over her but she seems even more dangerous than ignoramus Ocasio-Cortez, who has replaced Dan Quayle as the dumbest person ever elected to Congress. The New York Times ran a puff piece on her,  Glorified and Vilified, Representative-Elect Ilhan Omar Tells Critics: ‘Just Deal’, starting off with her being "bullied" as a 12 year old in a Virginia school (the only person to ever be bullied in middle school). What the media loves about her is that she seems eager to crap on the country that took her in.

Her arrival in this country was the first time, Ms. Omar has said, that she had confronted “my otherness” as both a black person and a Muslim. She became a citizen in 2000, when she was 17. After the Sept. 11, 2001, attacks, she decided to wear the hijab, as an open declaration of her identity. But from “the first day we arrived in America,” she said, she concluded that it was not the golden land that she had heard about.

“I think back to the orientations I went through a little over 20 years ago in the process of coming to this country, and in those orientations they did not have people who were homeless. There was an America that extended liberty and justice to everyone. There was an America where prosperity was guaranteed regardless of where you were born and what you looked like and who you prayed to,” she said, adding, “I wasn’t comfortable with that hypocrisy.”

So America is full of imperfect people and has often failed to live up to our lofty goals. Wow, what a penetrating analysis! No one has ever noticed that before.

I am not saying you can't raise concerns about the way things are in America. I certainly do although my concerns and my solutions are mostly diametrically opposed to Ms. Omar. What I find a bit galling is the utter lack of any sense of gratitude. I recognize that America, for all of her faults and for the very real concern I have that things are going to collapse, is still the greatest country on earth and no one else is even close. That is why I am so angry about the way the country is being run into the ground, it is not fulfilling the promise but instead many people seem determined to reverse the promises of America of liberty, personal freedom and personal responsibility. Ms. Omar and Ms. Okoumou, among many others apparently lack even a shred of awareness of how much better they have it here and they should know better. Ms. Omar allegedly went from being a member of a well-to-do family to living in a refugee camp to fleeing to America to get away from Somalia. You would think that she would appreciate how much better it is here and by "better" I mean better in every single way possible.

On a list of GDP per capita, the U.S. comes in at around 11th with a per capita GDP of nearly $60,000 per person, far ahead of other similarly sized nations. Somalia is such a disaster it isn't even on most lists but neighboring nations like Eritrea and Ethiopia are, with per capita GDP near the bottom of the rankings, with per capita GDP of around $1500-2000. Now GDP isn't everything but look at an aerial satellite map of Mogadishu and you see miles of shacks. Look at the same map of Minneapolis where Ms. Omar now resides and you see a vibrant city. The Human Development Index ranks the U.S. 13th in the world. All of the countries above the U.S. and below in the top 30 are either East Asian or European/American. Again Somalia is such a trainwreck that it doesn't even show up in the rankings but is lumped in as a "Low Human Development" nation. Neighbors Eritrea (179 out of 189 ranked) and Ethiopia (173) don't fare well again although neighboring Kenya comes in at 142 out of 189. I won't bother going through any other indexes, I assume you get the point. The nations Ms. Omar and Ms. Okoumou fled from are what our President crassly but accurately labeled "shitholes".

To put it another way. They fled from their homes of Somalia and the Congo because those nations are full of Somalians and Congolese people. They fled to my nation because it is full of people of European descent and not full of Somalians and Congolese. My country took them in and gave them a home and now they show no sign of ever going back to their countries. They live in a nation that is better in every possible way than where they came from but instead of showing some level of gratitude, they seem hyper-critical and determined to undo everything that makes this nation unlike the nations that they came from. It sort of reminds me of people in places like Massachusetts moving to New Hampshire to get away from Massachusetts or moving from California to Colorado to get away from California and then promptly doing their very best to transfer the states they moved to into replicas of the states they moved from.

Our freedom of expression and speech of course extends to naturalized citizens, so they can crab and complain about the country that took them in, gave them shelter and a new home. It would just be nice if they could, every now and then, show some gratitude for their incredibly better situation that was created by the same people they constantly criticize.
Posted by Arthur Sido at 3:58 PM