During Senator Rand Paul's Festivus Airing of Grievances, which was pretty funny and also very sad (see here for a nice summary of the highlights, including a study on the sex habits of quail high on cocaine), he made the following point:

Speaking of which, buried in the foreign aid reports last year, I discovered something — we give foreign aid to China. So government is so dumb, it is literally borrowing money from China, to give it back to China, while paying interest on it.
— Senator Rand Paul (@RandPaul) December 23, 2018


This is very true and easy to verify, to the tune of $53,000,000. The U.S. government provides a website that shows where all of our "aid" dollars go, the Foreign Aid Explorer.  Here is a screenshot and every country in blue is getting aid from us, the darker the blue, the more money they get. 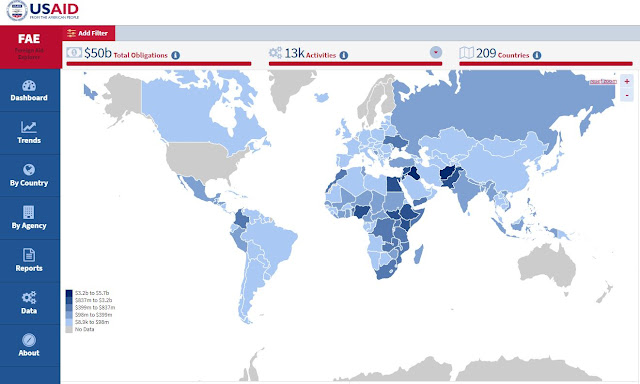 You might notice that there is an awful lot of blue on that map and in some places you might not expect.

Here are some of the third-world, downtrodden nations we send money to:

Oh and here are some other nations that we think of as rivals or enemies. We are also sending them money:

Those are just the small figures. We also send enormous sums to Israel, over $3 billion; Afghanistan, over $5 billion; Iraq $3.7 billion; Egypt $1.4 billion. At least with Afghanistan and Iraq, we broke those countries so it probably behooves us to give them some money but Israel is a highly advanced economic power with a per-capita GDP greater than Japan and the U.K. so why is a nation $21 trillion in debt sending over $3 billion in "aid" to a nation that doesn't need it (for more on that topic, see here)?

You might say that these are minuscule amounts in the big picture. $150,000 out of a $4,000,000,000,000 budget isn't even a rounding error. You would be correct. But a $21 trillion national debt doesn't happen because we write a single check for $21,000,000,000,000. It happens one small line item of idiocy after another. Twenty-one trillion dollar debts come from a trillion in deficit spending at a time and a trillion dollar deficit is made up of hundreds of thousands of smaller expenditures, any one of which is just a few million, but when added together they come up to enormous amounts of money. That is the point of Senator Paul's Festivus grievance airing. It is funny and not at the same time but the stark reality is that apart from Thomas Massie, Justin Amash and Rand Paul there are very few elected Federal officials that give a crap about the enormous debt they are compiling, because they know they will never be forced to deal with the repercussions. Mitch McConnell is 76 and obscenely wealthy, and will pass on his wealth to his heirs when he dies. What does he care about the national debt? Most of the members of Congress and just as important most of the members of the Deep State in government, lobbying firms and corporate board rooms, are wealthy enough to afford to preserve their wealth. It is well established that the areas surrounding Washington D.C. are some of the wealthiest in the nation and they grew wealthier as the rest of the country stagnated during the last recession. They think they will be insulated from what is coming but when the hounds are unleashed, they are going to find otherwise.

The U.S. takes at least $50 billion and throws it around the world, getting nothing in return for it. Many of the nations we give money to hate our guts. Others seek to supplant the U.S. as the world's dominant superpower. Others like Mexico ($289 million),  Honduras ($180 million) and Guatemala ($257 million) actively send their citizens to America to earn higher wages that are then remitted back home. America is their piggy bank. While cutting aid here or there wouldn't make much difference, cutting all foreign aid to zero certainly would. Fifty billion is still real money. $50 billion is around $150 per person in the United States, or $600 for a family of four. I am sure most of us would rather keep that money in our own communities than spreading it around the world like pixie dust and thinking that it will magically cause liberal democracies to spring up (and when it doesn't sending in the Army to make them be free, whether they like it or not).

End all foreign aid. Stop invading the world and causing more places to need aid. No more "Invade the world, invite the world". That is what a truly America First foreign policy should look like.
Posted by Arthur Sido at 8:25 AM