Bush 41 And An Opportunity Missed

As everyone paying attention knows, the senior President Bush, George Herbert Walker, aka Bush 41, passed away Friday, November 30th 2018. He was 94 and the oldest living President at the time. The elder Bush has been a constant presence since I have been politically aware, running unsuccessfully for the GOP nomination in 1980 before being chosen as Ronald Reagan's running mate. Then he was President for a single term before losing to Bill Clinton and of course his son succeeded Bill. He was the first man I ever voted for in a Presidential election. His family was a political dynasty and more importantly his family seemed to mean the world to him. He also loved his dog Millie and that carries a lot of weight in my family. 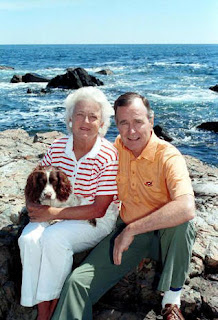 The McCain-ing of Bush 41 started almost immediately across the political spectrum from NeverTrumpers lamenting this "great man" to the crocodile tears of liberals that hated and reviled Bush when he was President. A man scorned by the Left has been miraculously rehabilitated in death because in his old age he occasionally railed against Trump. If you could find a section of Jeffrey Dahmer's diary where he insulted Trump, the Left would raise Dahmer to sainthood and demand an end to bigotry against cannibals.

Bush lived in the shadow of Reagan. There is not really any other way to see it. Bush failed to defeat Reagan in 1980 and I don't think he liked him much. I imagine Bush disliked Reagan and Trump for the same reason, they both seemed rather vulgar to his New England WASPish tastes. He was the Vice-president but the 80's were all about Reagan. Bush won in 1988 on the coattails of Reagan and he wasn't much of a President. As I wrote a few weeks ago, A Parade Of Small Men In The Highest Office, Bush seemed over his head in office:

Bush came across as completely removed from the lives of regular Americans and his signature screw-up was his screechy pledge, intended to sound tough, to "Read my lips, no new taxes", a pledge which he then of course famously broke. The economy was going south and he seemed baffled and conflicted.

Bush was an America patrician and it showed. Trump is a billionaire but tens of millions of working class people feel like he understands them. No one felt like Bush 41 understood them. Unlike a lot of other people, I can hold two thoughts at the same time: Bush seemed from a distance to be a genuinely nice man, perhaps to a fault, that cared about his family and also he was an awful President.

What kind of bugs me is that Bush won mostly because he was Reagan's VP. His next closest competitor in 1988 was Bob Dole and a more boring politician has never been born. He lucked out in his Democrat rival, because as boring as Dole was, Dukakis was even more ridiculous. While many racialists and SJW types blame the Willie Horton ad as a dog whistle and blame Dukakis losing on that ad, his sitting in a tank looking like a little boy playing with a toy did more to sink him. Also as a side note about Willie Horton, what is often forgotten by almost everyone is that Horton was a vicious criminal in prison for life without parole for murder that was given "weekend" furlough where he assaulted, robbed and raped people. Shocking! Why would someone with no chance of parole be expected to show back up to prison after his furlough and why would someone like Horton be given furlough anyway? The judge that sentenced him after he was recaptured would not return him to Massachusetts for fear of Horton being let loose on society again.

When Bush won the Presidency, America was at her apex. Within a short time the Berlin Wall would fall and the Soviet Union would disintegrate. Our only foreign competitor would be dead. The Reagan strategy had worked and what was unthinkable to me as a high school kid happened and the great Red Menace was no more. Saddam Hussein decided to invade Kuwait and the U.S. led coalition destroyed the Iraqi military in a matter of days. That victory was for many of us very significant. It was the first war we saw televised in real time and it helped to erase the lingering shame of Vietnam. Unfortunately it also aroused the neocons in Washington, that cowardly cabal of chickenhawks that found something better than pornography: live coverage of war piped via cable right into their living rooms. America would adopt a new, more militaristic and interventionist foreign policy to "spread democracy". Daniel McCarthy wrote a pretty unflattering eulogy of Bush 41, Mourn Bush Sr, but don’t celebrate him for what he did to America and the world, and included this  regarding the first Iraq War:

Bush’s success, in one sense, had been as dangerous as his failure. The swift victory of US force in the Persian Gulf War restored American confidence after the Vietnam War. But that confidence was translated by politicians following Bush’s example into hubris. Bush had never succeeded in remaking the Middle East or inaugurating the pro-democratic ‘New World Order’ he liked to talk about. He had the good luck to be president when the Berlin Wall came down and the Soviet Union imploded. America had the bad luck to have him as president just when a post-Cold War grand strategy was needed.

But at the time, the victory over the badly outmatched Iraqi forces was a huge boost to the Bush presidency and Bush was immensely popular after the swift and decisive victory. But his missteps hurt him, especially breaking his "Read my lips, no new taxes" pledge and his apparent cluelessness about the stumbling economy.

While he was President, Bush had a lot of goodwill to work with. He benefited from the popularity of Reagan. He oversaw the crushing of Iraq and was the President when the Soviet Union died and the Berlin Wall fell. In his presidency we had one of the last opportunities to roll back the Deep State but instead Bush doubled down, most notably with the disastrous NAFTA trade agreement. It makes some sense. Bush was the epitome of the Deep State and the first openly globalist President. He was an Ambassador to the UN and the Director of the CIA. He deposed and seized Manuel Noriega of Panama, he sent American troops into Somalia which would lead to the fiasco recounted in Black Hawk Down. Born in Massachussets, Bush went to all the best schools, including Yale where he was part of the secretive Skull and Bones society. He was an elite of the elite and made no attempt to soften it. The language Bush used about the "New World Order" is pretty ominous in retrospect and the neocons wasted no time declaring that, with the fall of the Soviet Union, America would now be free mold the world as we saw fit. The late neocon writer Charles Krauthammer declared a Pax Americana in the pages of the Washington Post stating:

Now that, with the fall of the Soviet empire, the bipolar world has become unipolar, the one remaining superpower should unashamedly and confidently play the part, acting unilaterally, if necessary, to defend its friends, its interests and its values abroad.

That idea, that America should act unilaterally to force our values, which we can't even agree on as a people, onto other nations has been the unofficial foreign policy of the United States since Bush 41. Like most other neocons, Krauthammer would never have to go to war himself to carry out this vision as he was paralyzed as a young man. Krauthammer said something else in that article that probably didn't attract much attention at the time:

The tired, the poor, the huddled masses of the world who cannot gain admittance to Pax Americana through immigration hope that we might have some of it for export. We should say to them: Where our interests demand it and our values permit, we will.

That is very interesting. As the doctrine of spreading "democracy" has largely failed in war after war, in Iraq and Afghanistan and the "Arab Spring", it seems many of Krauthammer's neocon buddies are focusing more on the "invite the world" half of the dogma of "Invade the world, invite the world". Neocons today, most notably Bill Kristol, are in the vanguard calling for mass immigration.

Bush had an opportunity to use the political capital he had to do some really conservative things. He could have turned the attention of the U.S. inward to our own struggling middle class. He could have tackled the national debt which at the time he took office was a more manageable amount of less than $3 trillion dollars. By the time he left office it was over $4 trillion and headed inexorably upward. Had Bush adopted a more "America First" policy, we would certainly be having different conversations today. Closing the border in the early 1990's and clamping down on illegal aliens might have been enough to stem the demographic tide that has already swallowed California and is threatening to do the same in places like Texas. Recall that Pete Wilson, a Republican, was governor of California at the end of the Bush presidency and would hold office for 8 years. In 1990 California was 57% white and 25% Hispanic. In 2010 it was 40% white and 37% Hispanic and in the interim Hispanics have become the largest minority group in a state which has no majority race or ethnicity. It is not coincidental that no Republican will ever win state-wide office in California again. In the most recent Senate election in California last month, two Democrats faced off thanks to California's "jungle primary". The top Republican in the primary received a whopping 8.3% of the vote.

If Bush had been less concerned about the New World Order and more concerned about the United States, he might have won re-election in 1992. Instead he lost to a bumbling, horny buffoon, Bill Clinton, thanks in large part to the third party candidacy of Ross Perot. Perot was a sort of proto-Trump, a billionaire populist that at one point was leading the polls and might have actually won if he had not dropped out before re-entering the race. Perot ended up drawing almost 19% of the total vote while Clinton won with only 43% and Bush came in with a humiliating 37%, the lowest percentage received by a sitting President since 1912. Perot captured what would later be the winning Trump coalition of working and middle class voters sick of being an afterthought for politicians.

Of course that was not Bush. He was not a populist. He wasn't especially conservative. He wasn't inspiring. As I said previously, he was an American patrician, one of the elites that rule America. His father was a U.S. Senator and his son would become President and another the governor of Florida. Unlike their rivals, the Clinton family, the Bush family was wealthy and powerful all the way back to the 19th century and in spite of living in Texas, George H.W. Bush governed like a New England aristocrat. He was who he was, and notwithstanding the praise heaped on him by his one time rivals and enemies, he was at best a mediocre, forgettable President.

Bush was President at the hinge of American history, as we moved out of the Cold War that dominated America from the end of World War II until the fall of the Berlin Wall, and into a new era where America stood astride the world as the only superpower. Instead of using that power to strengthen America, Bush embarked us on the path we find ourselves on now, a path that ironically leads directly to November 2016 and the current resident of the White House.
Posted by Arthur Sido at 7:15 PM