Bill Kristol, the effete, insufferable, smug boob that ran the once venerable magazine The Weekly Standard into the ground in no small part due to his single-minded obsession with Trump, is one of the least self-aware and borderline delusional people in the political scene today. He regularly holds forth on Twitter declaring himself the savior of conservatism, but ironically the only people that seem to reply are a bunch of leftists that share his hatred for Trump, plus a smattering of conservatives mocking him. Well he posted yet another tweet yesterday that is utterly lacking in any reality.... 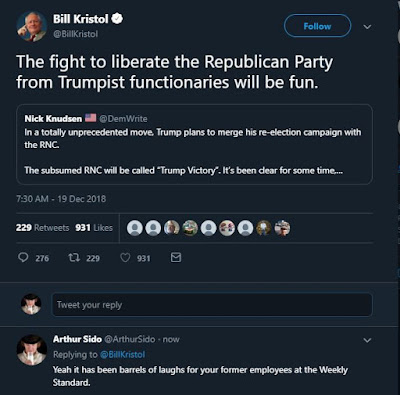 What you have to realize is that Kristol thinks that a) the Republican party is going to abandon the strategy that won Trump the White House in favor of the strategy that lost the White House to an empty suit named Barack Obama, twice, and b) that what the Republican voting base really, really wants is a pompous windbag, that would prefer to replace them with "superior" foreign workers, to lead us.

I read this tweet yesterday and was just floored at how lacking in realism it is. It is akin to people like John Kasich and Jeff Flake, both despised within their own party, who keep hinting at challenging Trump for the nomination in 2020 and apparently waiting for the rank-and-file to beg them to do so. What appeal is there in a cowardly chickenhawk consumed with bloodlust that wants to send our sons and daughters to die in meaningless wars that he would never have deigned to fight in himself?

Then it struck me. Bill Kristol is the American political version of Viserys Targaryen from Game of Thrones (or more accurately the book series A Song of Ice and Fire). If you haven't read the books, Viserys is a spoiled and cruel boy, the last male heir (or so everyone thinks) of the Targaryen family that ruled the land of Westeros. They were known for taming dragons in the past but the last dragons had died long ago and the family is mostly corrupt. After his father the Mad King Aerys was overthrown, Viserys and his sister fled Westeros and went into exile. In the books and HBO adaptation, he is convinced that the peasants (the smallfolk) really love his family and are eagerly awaiting his return to take his rightful place. Viserys believes the story that the smallfolk pray for his health and that many loyal subjects back in Westeros are sewing dragon banners, his house sigil, waiting for his return when they will rise up and overthrow the new king, the Usurper. In the story it is clear that is not true at all, as Ser Jorah Mormont explains to the sister of Viserys, Daenerys Targaryen in this scene.


Just as the common people in Westeros are not secretly longing for Viserys Targaryen to return, the Republican party is not secretly longing for Bill Kristol to come and save them from the Usurper Donald Trump. They are not sewing banner with a chicken sigil in secret. Most didn't know who Bill Kristol was and of those that did, virtually no one wants him to "lead" us. Bill is as delusional as he is repugnant.

Now if only someone could find a Khal to deal with Bill Kristol in the same manner as his doppelgänger  Viserys Targaryen.....