On December 24th, in the year 2000, we welcomed a new baby boy into the world. He was our fifth child and third son, born on a very snowy day in Wisconsin. Nine months later in September he was a little red headed baby and we were living in Kentucky. One day that month the world changed and the World Trade Center towers came down. He had no idea why mom and dad were so upset, after all he was just a nine month old baby. The next month on October 7th, 2001 the United States invaded Afghanistan with the goal of finding Osama bin Laden and stamping out terrorist training sites.

In our war in Afghanistan, over 2000 American troops have died. Over 20,000 have been wounded, many grievously including amputation of limbs. Many others silently carry mental scars that will never heal. Osama bin Laden has been dead for more than 7 years and there are no signs of achieving a "victory" in Afghanistan, mostly because we have no idea what that would even look like. Very few people in either party show any inclination to end this pointless occupation. Those that do are scorned by their peers. The announcement from President Trump recently that the U.S. would be pulling our troops from Syria and a significant number of forces, around half or 7000 men, from Afghanistan was met with howls of rage. Everyone knows what the end result is really going to be. At some point we will withdraw and the Taliban will move right back in, reestablishing an Islamist state and all of the blood we shed and the money we spent will have been for nothing. Just a week ago, the U.S. was holding talks with the Taliban to negotiate a peace settlement and when we finally reach one the Taliban will be back in Kabul running Afghanistan. You probably didn't see anything about this in the news.

Today my son turns 18 years old, and we now have more adult children than minor children. 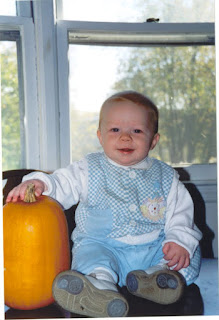 Our son is 18 and now is old enough to fight in a war that started when he was this tiny baby.

The same war is still going on with no end in sight.

I recognize that as an American father of sons, there is that chance that someday our nation may call and need my sons to defend our country. But it will be over my dead body before any of my sons go off to kill and die in some pointless war cooked up by the sociopaths in the monolithic war cult that dominates both political parties. There is nothing noble or patriotic about dying for a foolish war.

So happy birthday son. I hope that I won't need to write a similar post about the endless war in Afghanistan in 2023 when our youngest son turns 18.
Posted by Arthur Sido at 11:24 AM