Last night went about as expected. The GOP lost control of the House so Nancy Pelosi or some other liberal loon will become the Speaker and be second in the line of succession to the Presidency. Scary thought. On the other hand the Republicans gained seats in the Senate, and if I am researching this correctly the sitting President's party losing seats in the House but gaining them in the Senate hasn't happened since 1982. Interesting times.

Here are some take-aways.

Like it or not, the Republican Party is Trump's party now. His influence mitigated the potential losses and pushed candidates like Mike Braun in my home state of Indiana and Hawley in Missouri to wins and pick-ups for the GOP in the Senate. He is already on record pointing out that those that weren't aligned with him lost last night. It is hard to see how a Republican wins the Presidency or national offices in competitive states without the Trump coalition. I expect to see a Republican party that is a lot more populist and nationalist over the next 2 years. I see that as a positive thing.

Liberals Discover That U.S. Stands For "United States" And Are Furious

It was amazing to see liberals suddenly discover how Senate seats are apportioned and freak out about it, sort of like the Electoral College. How someone can be an opinion maker and "respected" journalist or public figure and not understand how the government was designed is baffling.

Trump is already taking subtle shots at Nancy Pelosi and it isn't even 9 AM yet. I would be surprised if we don't get at least one semi-serious announcement from a Democrat that they are running before the end of the month. If Pelosi is the Speaker, expect the next two years to be a giant proxy fight no matter who the Democratic nominee is. Turnout was high yesterday, I expect record numbers in 2020. I also think Trump is both more likely to run and also to win after yesterday.

Nothing Happens On Immigration

Democrats know that their electoral future depends on accelerating the "browning of America". They abandoned the white working class, and are in the process of jettisoning garden variety white feminists. There is no way they agree to any sort of immigration restriction and Trump is not dumb enough to fall for the "amnesty now for enforcement later" trick that Republicans traditionally fall for.

Obama pioneered the "phone and pen" style of executive branch governance and I expect to see Trump do the same. It isn't healthy but it is the expectation now. I see a lot of executive orders that immediately are overturned by a circuit court and end up at the SCOTUS. Trump is going to do everything he can to circumvent the Congress.

The Influence Of RINO Senators Like Susan Collins Is Diminished

Now that Republicans have a more solid margin in the Senate, we won't be required to kowtow to Susan Collins and Lisa Murkowski as much. In fact Susan Collins is up for re-election in 2020 so it will be interesting to see if she embraces Trump or tries to run away from him. Regardless, they lose influence as a larger margin made up of Trump supporters makes them less necessary.

The close Texas win for Ted Cruz is pretty ominous. Republicans can't win without Texas and Texas can't stay Republican for long if the demographic trends continue this way. What Democrats fail to win by winning the war of ideas they can still win by replacing the heritage population with a new non-white electorate. I agree more and more with Ann Coulter every day, including this quote from her book Adios, America

What happens with immigration will determine whether America continues to exist or becomes a Third World republic that will never elect another Republican—in other words, “California.” It’s more important than gun rights, right to life, taxes, or Iran’s nuclear program—or whatever other issue you care to cite, because immigration will decide all issues, once and for all, in favor of the Democrats.

I am seeing a little buyers regret from some NeverTrumpers. It is apparent now that the GOP is Trump's party and there is no home for anti-Trump "conservatives". In order to retain some influence and to sell some books, some NeverTrumpers will probably have a "change of heart".

With a larger majority in the Senate, this would be an opportune time fro RBG to retire, voluntarily or involuntarily. The universe might explode. I am not wishing her ill. Probably. But you can be sure that liberals everywhere are offering prayers to their goddess Choice to prolong her life because if she dies, Roe v Wade dies with her. 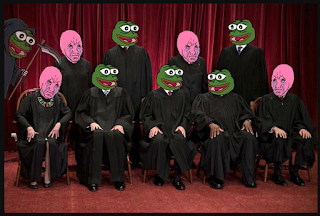 Lots more to come. The frenzy and fury over the 2020 election is going to surpass anything we have ever seen in American politics. Let the chaos begin!
Posted by Arthur Sido at 9:42 AM