The Case Against Lucy Brenton

Arthur Sido November 1, 2018 0 Comments
Unless you live in Indiana and are a fairly serious political observer or you live outside of Indiana and are a super engaged political geek, you might be asking: who is Lucy Brenton and why is there a case against her? Well she is the Libertarian candidate for the U.S. Senate in Indiana and as of now is polling at around 3% of the vote. That is significantly less than she was polling a short while ago as we get closer to election day. Lucy seems like a decent person. She has ten children so clearly family is important to her. She holds most standard libertarian positions, even invoking the old “personally opposed” language on abortion, believing that it is logical to be simultaneously against abortion but then offering this squishy language about it:
I believe that unless we protect the smallest and most helpless members of society, that we protect no one. It is my fervent desire that no baby ever be aborted and that no one ever finds it necessary to seek one. Regardless of my personal view, the government should not be involved in what is ultimately a medical decision controlled by the woman in whose body the baby is growing. Personally, I believe that those who want to reduce the number of abortions must continually step forward to offer help and alternatives to women and families by creating an accepting culture that offers hope, financial resources and support in a situation where many are scared, feeling that they have run out of options.
It is not the place of the Federal government to pay for abortions nor legislate this issue. The Constitution has no mention of abortion and doesn’t authorize the federal government to be involved in abortion. Therefore, as a Libertarian, I would vote no on any legislation at the federal level because it is not within the purview of the Constitution.
What kind of nonsensical double-speak is that? She describes unborn children as the smallest and most helpless members of society, a statement that seems to assert the unique person-hood of each child, but then claims that the decision to abort a child is simply a medical one. She later says in a different issue that: The one valid purpose of government is to protect its citizens from force and fraud. Well, what exactly is abortion other than the forceful removal of a child from the womb? Again, she describes unborn children as the smallest and most helpless members of society but somehow manages to take away their right to life as a citizen and the right to not have others use force upon them. I agree with her first statement: unless we protect the most vulnerable, we are not protecting anyone but the cognitive dissonance required to hold the idea that unborn children are vulnerable and helpless members of our society on the one hand and yet killing them in the womb is simply a “medical decision” is staggering.
She is correct that the Constitution makes no mention of abortion, but still the Federal government has mandated abortion on demand by judicial fiat. Somebody that truly believes in Federalism and a limited government would advocate for an overturn of Roe v Wade, returning the issue to the states at the very least. Her position unfortunately sounds like someone that is probably actually more pro-life than she is letting on but who is masking that under politically correct language so as not to offend any pro-abortion potential voters. Pretty sad.
But the real reason for not voting for Lucy Brenton is more simple than her confused statements about abortion. The reality, as I wrote previously, is that Libertarians are nothing other than spoilers at this point. There simply is not a sufficient natural constituency for Libertarianism and like it or not we live in a winner-takes-all system. The best a Libertarian has done for President was Gary Johnson in 2016 with 3.5% and that is not a testament to his strength as a candidate or an increase in Libertarians, it is that both major party candidates were deeply flawed and he still couldn’t break 4% of the vote. Libertarians simply don’t have the electoral support to even draw double digits with any consistency and so they simply sway the election for one of the major parties. At least here in Indiana that means pulling votes from Republicans.
Don’t believe me? Well we are receiving fliers praising Lucy Brenton and attacking Mike Braun but they are not being sent out by the Brenton campaign. Instead they seem to be coming from liberal groups that are trying to siphon off support for Braun to throw the election to Donnelly. We got this in the mail earlier this week (front and back of flier). 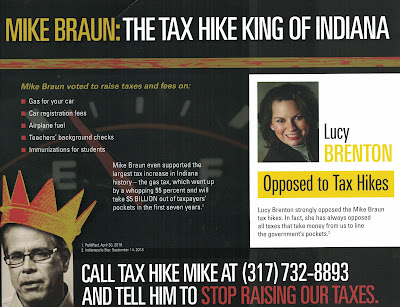 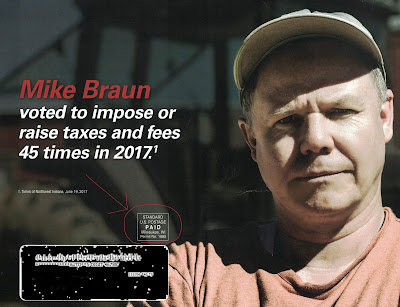 Notice that there is no name to indicate who or what organization is paying for this flier and that would, if I understand campaign finance rules correctly, be illegal if Lucy Brenton’s campaign was paying for it. If a Libertarian group was running the flier you would think they would note it. The picture of Lucy is lifted right from her webpage. It is also interesting to note the mass mail stamp is from Milwaukee. So who is paying for this ad? It seems pretty clear it is coming from liberals knowing that knocking Braun on taxes and praising Brenton might convince some voters on the right to vote Libertarian even though she won’t get more than 3-4% of the vote total.
Based on the latest polls, Mike Braun leads Joe Donnelly 49%-46% with Brenton pulling in 3-4%. She isn’t going to win or even place respectably. But she might be enough to make a difference for Donnelly. That is her only role in the election next week. People that want traditional libertarian ideas like smaller government and lower taxes are going to vote either Republican or Libertarian. They are obviously not going to vote Donnelly either way. Brenton’s Quixotic campaign has the very real potential to help re-elect someone that opposes every traditional Libertarian ideal. How exactly does that help advance the cause of liberty?  Lucy Brenton is probably a nice person and we probably have a lot in common but she isn’t a serious candidate, she is simply being a political pawn used by the Left to re-elect Senator Donnelly.
The better solution, one embraced by libertarian/libertarian-leaning candidates like Rand Paul, Justin Amash and Austin Petersen, is to seek to move the Republican party toward more pro-liberty positions. No third party is going to ever gain enough traction to win significantly at the national level. Ross Perot came close but that was many years ago and his message was more of a populist message more similar to Trump than anything Libertarian. People that want to advance liberty, defend freedom of speech and expression, protect the 2nd Amendment, see government smaller, need to work within the Republican party to move the party in that direction rather than playing spoiler. Helping to elect Democrats in order to make some “noble” point isn’t principled when we are on the edge of serious crisis in our country. I used to reject the spoiler label but it is clear that Libertarians are going nowhere and given the lunacy coming out of the national party on issues like open borders, I don’t see any future for the party. Vote libertarian, just not for Libertarian candidates.
If you live in Indiana and cherish liberty and freedom, your vote next week should go to Mike Braun. He is not an ideal candidate but he is the best choice we have in 2018.