To my everlasting shame I have somehow been on social media for many years and never received a stint in Facebook jail or a Twitter suspension. Until now. I got the sternly worded email yesterday declaring that I had engaged in "hateful conduct" and would now be punished until making sufficient oblation to the social media demigods. What awful thing did I do? Did I use the "c" word in describing a woman? Suggest Mohammad was a pedophile? Use the word nigger in any context? Nope. I referred to a woman as a "bimbo". My mistake, she is a liberal blue checkmark so therefore she is a protected class. Here is the email from Twitter: 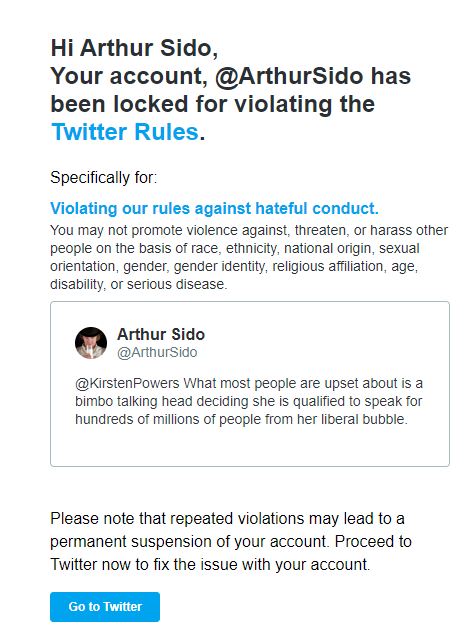 I was replying to a tweet from Kirsten Powers defending herself after she claimed on CNN that white women vote in ways that prove they are just as guilty of "white privilege" as those evil white men. 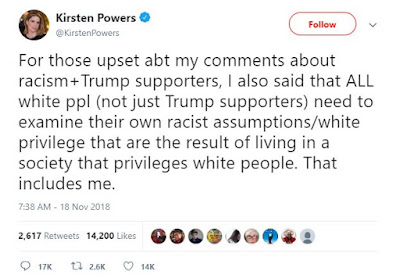 Here are the comments from her appearance on CNN which led to some heated pushback and prompted her tweet:

Weird, why would anyone take offense at that? Of course white women are tools of the "white patriarchy"! This gets back to what I have been talking about regarding white women and the Left recently (see: Welcome To The Party Ladies!). White women have come full circle, from demanding the right to vote to have their voices heard to now being told they are only permitted to vote for one political party, thus no longer being allowed to have an independent voice. White women are the contemporary version of the Three-Fifths Compromise. White women are technically counted in the voting tallies but must vote for Democrats, taking away their voices and their agency. Democrats get the benefit of the votes of white women without the hassle of having to actually convince them to vote Democrat. Congrats ladies!

Back to Twitter. The comment I made was one of many, many replies to Ms. Powers that called her out for being so ignorant. When your tweet gets 17,000 replies, you know people are irate. But in my case I called her a bimbo which I stand by, given that she used to date Anthony Weiner, aka Carlos Danger. Now bimbo is certainly a derogatory term. That is why I used it. But peruse Twitter and even a cursory glance will show you people using far more inflammatory language directed at others, language that makes "bimbo" seem pretty tame. So why the suspension?

Twitter, Facebook, Youtube, etc. all operate under an apartheid system. There is one set of rules for liberals, especially blue checkmark liberals, and another set of rules for conservatives. Peter Fonda can talk about having a pedophile rape the minor son of the President of the United States or Louis Farrakhan can call Jews all sort of derogatory names or Tariq Nasheed can publish his racialist fantasies about police death squads hunting down innocent black men and no one bats an eye at Twitter. In fact they give them the blue checkmark imprimatur of respectability. I don't care if Twitter decides that calling people names like "bimbo" is off-limits. Their site, their rules. What I do care about is the way that they selectively enforce their rules. Granted, someone certainly reported my tweet for "hate speech" and it was of course a liberal and conversely conservatives generally don't do that. I report tweets that call for violence but that is it. Someone can call me every name in the book and while I will likely reply with sarcasm and perhaps some vitriol, I don't report them for that. Thus the difference between the left and right. I demand the right to refute opinions and positions I disagree with. The Left demands that opinions and positions they disagree with be silenced entirely. I don't want the Left silenced, when twits like Alexandria Ocasio-Cortez go on a rambling screed about the "three chambers" of our government, it makes my case far better than I ever could but for the Left it is clear that they cannot win a battle of wits, logic and facts so they seek to silence their opponents.

As part of the Twitter system of penance, they want my cell number to send a tweet with a verification code. They already have my email, so why not send it there? After all, they notified me of my suspension via email. I refuse to give my cell number to social media companies and given how eager Facebook and Twitter seem to be to get my cell number, it indicates to me that not giving it to them is sensible. We will see what Twitter does, if I have to I will get a burner phone and let them text to that.

Social media is the best place to get news and commentary but it also is tightly controlled and getting more so by the day. Moreover it is very unevenly policed with almost exclusively people on the Right being censored while people on the Left can accuse every white person in America of being complicit with "white supremacy" and not only not get suspended but instead being protected from mildly offensive names. If Twitter restores my account, then great! I will keep saying what I have been saying. If they do not? I will create a new account using a bogus email account. What I won't be is silenced.
Posted by Arthur Sido at 10:25 AM