Getting Tough On Crime D.C. Style

It is almost universally recognized, although often obfuscated, that some minority groups commit crimes at a higher rate than the general population. This is particularly true for black Americans. You can question the reasons for this but in general it is understood this is a simple fact.

But our imperial overlords in the District of Columbia have figured out how to reduce crime among blacks.

Apparently instead of a criminal offense and a $300 fine you will be assessed a $50 non-criminal fine. Like magic the crime rate will go down! 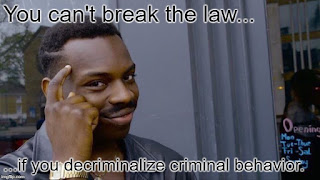 This captures the D.C. mindset perfectly. There is a serious uptick in fare jumping arrests/warnings, from 4,000 in 2013 to 15,000 in 2017, and a disproportionate number of those arrests and warnings are for blacks so clearly the solution is to stop making this criminal act criminal in the first place. By this logic you could eliminate arrests for grand theft auto by making it no longer a crime to steal a car. I am not equating car theft with fare jumping of course, just making a point. The problem is not people evading paying the Metro fare like everyone else, the problem is that too many black people are getting busted for it.

This is not an insignificant issue. According to the report from the Washington Post, the cost of fare evasion is up to $25,000,000. That means that those that do pay to ride the Metro have to pay more to offset those that essentially are stealing the service. Jack Evans, the Chairman of the Metro Board, voted against the measure because, as any rational person knows, reducing the penalty for fare evasion will encourage more people to evade paying.

“By decriminalizing fare evasion we are only encouraging people to not pay their fare,” he said. “Because there is absolutely no mechanism to collect from a civil infraction.”

That is simple common sense. People respond to incentives and disincentives. If you reduce the disincentive to avoid paying the fare, you will encourage more people to do it. Then again, common sense is pretty uncommon today. Case in point, one of the supporters of the bill, D.C. Councilwoman Brianne Nadeau is quoted as saying:

But Council member Brianne K. Nadeau (D-Ward 1) called the bill “one attempt to remedy” the issue, one that “creates some justice in a place where it doesn’t currently exist.”

Um, how is it "justice" to make it easier for people to avoid paying the fare that keeps the Metro running for everyone that relies on it, many of whom are poor and black and don't have jobs where they get a parking spot? I have been on the Metro a number of times and a significant number of riders are elderly, students and minorities. They all have to pay more to offset the $25 million lost to fare jumpers. What about "justice" for them? The lobbyist on K street isn't impacted by paying more for his Metro ticket but a janitor in his building certainly is.

This is the real problem with the use of the word "justice" by social justice warriors. They aren't talking about actual justice, they are talking about identity politics dressed up in the language of justice. My wife made a very good point about this whole thing: What it really comes down to is leftist racism, the soft bigotry of low expectations. To the leftist, people that are black can't be expected to pay the fare like everyone else because they have no moral agency, thanks to "white supremacy". To liberals blacks are incapable of exercising the sort of maturity and responsibility that we expect of everyone else, so they decriminalize the offense because the poor dears just help but break the law. No group of people in this country are more racist than do-gooder white leftist SJWs.

Nonsense like this is why we should never, ever give the residents of D.C. representation in Congress.
Posted by Arthur Sido at 10:09 AM