Antifa Is A Terror Group

While mainstream news outlets were hyperventilating because a partisan hack who was grandstanding at a press conference lost his press credentials, in the real world a mob of antifa thugs went to the home of Fox News pundit Tucker Carlson. Carlson wasn't home but his wife was. The crowd surrounded the home, banged on the door to the point of cracking it, and shouted slogans like:

“Tucker Carlson, we will fight. We know where you sleep at night.”

I am not sure how that can be interpreted as anything other than a threat of violence. His wife was terrified and called police while locking herself, in her own home, in the pantry. Since he lives in D.C. his wife was not even able to arm herself. Fortunately his four children were not home but his wife was no doubt traumatized by this crowd. These are the people that are fighting the patriarchy and all that by terrorizing women alone in their homes.

Vox write Matthew Yglesias, a corpulent soyboy and leftist, seems to be among the many that are at least tacitly excusing the terrorist attack on Carlson's home. Matt has over 400,000 followers on Twitter so he has significant influence. 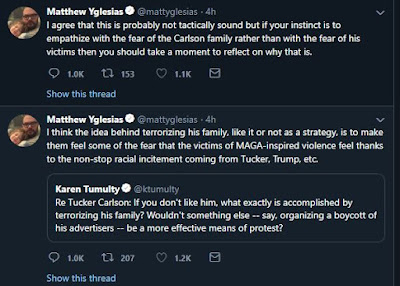 Terrorizing a woman alone in her home is just a matter of tactics and strategy.

This is the sort of reasoning that goes into the thought process of terrorists. It may be bad tactically but it advances our cause so a little terror is OK.

It doesn't matter that basic human decency would demand that any man be outraged when a defenseless woman is forced to lock herself in the pantry of her own home in terror. Her door was slammed into and it cracked. What would have happened if the door had broken and some of these lunatics had gotten in? Don't underestimate the power of a mob frenzy. Would they have hurt her? Quite possibly. What if she tried to physically bar their entrance or grabbed a kitchen knife to protect herself? It is not hyperbole in any sense to say that her life was in genuine danger.

Now, if CNN's Don Lemon was on the air and his white boyfriend was home alone and a bunch of those awful white male terrorists that Lemon is so terrified of had shown up at Lemon's home, screaming anti-homosexual epithets and threatening violence, beating on his door and damaging it, what do you suppose the media reaction would be? It would be wall to wall coverage and every law enforcement agency known to man would be on the case. In fairness many media personalities on the Left have decried this but it is getting nowhere near the same play as the Acosta kerfuffle.

Banging on the door of Tucker Carlson's home, spray painting anarchy symbols on his driveway, screaming threats at his house, is no different from burning a cross on the lawn of a black family.

That raises the question. Why hasn't antifa as a whole been declared a terrorist group and had the law enforcement apparatus of the United States jumping on them with both feet?

The full force of the U.S. legal system has been used in the past against groups from the Mob to the Klan. The Mob is a shadow of what it once was and the Klan is numerically nearly non-existent and riddled with informants. Why isn't the government infiltrating these groups, making arrests, tracking down their funding and shutting it off. Why are groups like the Southern Poverty Law Center not front and center fighting against this terrorist hate groups? The answer is obvious. Antifa are the shock troops of the Left, the jihadi of progressivism. There is no way that the SPLC or ADL is going to take an active role in exposing them. Likewise most the law enforcement apparatus is deeply tied into the Deep State and opposed to Trump. Therefore anitfa get a free pass more or less. If you are a white guy with right wing view and show up at a rally, there is a decent chance of you getting arrested and prosecuted. If you are antifa, you probably won't be arrested and if you do you won't be prosecuted.

Law enforcement is not going to do what needs to be done about antifa, meaning that they will continue to run wild among the public square, terrorizing people that can't defend themselves. But sooner or later they are going to terrorize the wrong person and that person will be armed and won't back down and that means an antifa dead on a front porch somewhere. Or just as likely some antifa terrorist is going to get overzealous in their quest for "justice" and kill some innocent person with the "wrong" political beliefs. Either way, the violence is going to escalate in this country. The only way this doesn't turn into a bloody civil war is for political leaders to have the vision and courage to divide this nation up before it tears itself apart.
Posted by Arthur Sido at 4:08 PM