I mentioned last week that I was suspended from Twitter for a day or so for calling Kirsten Powers a bimbo on Twitter. While I stand by that characterization, I did have to delete the post to get my account access back. I decided to do a little experiment to prove my contention that Twitter, and using guilt by association virtually all social media, is heavily slanted toward suppressing speech from the Right while ignoring similar or worse speech from the Left. I ran across a nice example that hit a couple of the points I was looking for, this tweet from "Bishop" Talbert Swan. Mr. Swan is apparently a "minister" of some sort.

According to the good "Bishop", white women voted as a majority for a couple of candidates he didn't like, including pretty overwhelmingly for Brian Kemp in Georgia which was even worse because his opponent was a black socialist woman, because they support "white supremacy", perhaps his favorite term. For their crime of making an independent decision on who to vote for, "Bishop" Swan called white women:

So comparing my comment about Kirsten Powers being a bimbo, calling millions of women "pure trash" because they are white and voted in a way that this "Bishop" doesn't like seems a lot more egregious. I went ahead and reported this tweet for hateful content, which is the same "offense" that I was suspended for.

I checked this morning and the tweet was still up and Twitter sent me a notification that they had reviewed my report. 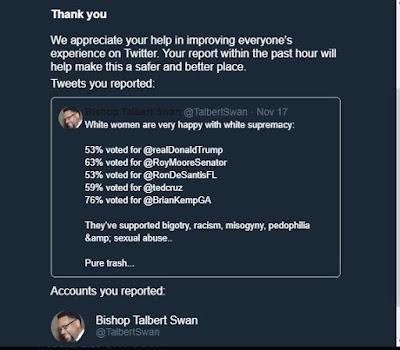 I checked again a few minutes ago and 24 hours after I reported this tweet and at least 21 hours since Twitter support "reviewed" my report, his tweet is still up and his account is still active and tweeting nonsense in a steady stream.

Apparently calling an individual woman a bimbo is some sort of hate crime. Calling millions of women racist white trash is perfectly acceptable.

Now, I recognize that there are some critical differences here. Some important distinctions:

2. The "Bishop" is black. I am white, although that is not obvious from my profile picture, it isn't a secret to anyone reading my posts.

3. The "Bishop" is a flaming race-baiting liberal. I am a right-wing general purpose agitator.

Add those together and what you get is "Bishop" Swan being given a pass for calling white women voters "pure trash" for no reason other than using their own discretion in voting while I get suspended and have to delete a tweet for calling a woman a bimbo. I am not up to date on my insult hierarchy but it seems to me that bimbo is less offensive than white trash. In fact "white trash", which is essentially what the "Bishop" is saying is somewhat similar to calling black people niggers. I get there are some historic differences here but white trash is an insult that has been thrown at lower class whites as a group for my entire life. Oh and later in a subsequent tweet he sneers at liberal white women that didn't like his characterization, calling them "Beckys", another derogatory racially based term. Quite the character that "Bishop"!

Mr. Swan, the "Bishop" of "Spring Of Hope" church has penned quite a glowing opinion of himself on his webpage. It would make a lesser man blush but then again he is a "Bishop". Here is a sample:

Bishop Swan has a shepherd’s heart and is committed to serving God’s people. He is passionate about preaching the Gospel and proclaims God’s word with power and conviction during worship services, teaching sessions and through the television, radio and internet. His relevant message is in high demand and he is sought after to preach across the nation.

Nothing says "shepherd's heart" and "serving God's people" quite like calling white woman "pure trash" because they voted in a way he didn't like. The website for Spring Of Hope has a truly impressive array of pictures of the "Bishop", links to his talks, information about him and his wife, the "First Lady" of Spring of Hope. You would be forgiven for wondering just who was being worshiped at this gathering. But to be fair, there is a small link about 2/3 of the way down the page nestled among the links with pictures of the Bishop, ways to donate and various political advertisements where you can click to learn about Jesus. 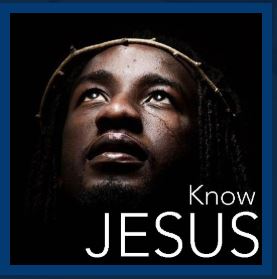 Wait, did you think that Jesus was born to a Jewish mother and was a Middle Eastern Jewish man, not a sub-Saharan African with corn-rolls? Well that just shows how little you know about the Bible and what a racist white supremacist you are! Shame on you!

Like I have pointed out before, most recently in my post Welcome To The Party Ladies!, white women are quickly losing their oppressed status as a class (unless they are lesbians, for now) because they stubbornly refuse to vote for who they are told to vote for. How can white women be properly appreciated for their oppression if they won't monolithically vote for the party that elevates the infanticide of their children into an unholy sacrament? Come on! Black women show how strong and independent they are by voting nearly unanimously for whoever the Democrat is, white women that make their own decisions on who they should vote for are pure trash. By the way, my wife voted for Trump and if the "Bishop" should ever call her "pure trash" in my hearing, he had better be prepared to turn the other cheek.

Pretty clearly Twitter has two standards. If you are anywhere on the Right and you say anything that upsets anyone for any reason, no matter how mild, you get suspended and threatened with permanent banning. If you are on the Left, you can say the most outrageous things you like about anyone, even calling millions of white women "pure trash" because they chose to vote their own conscience and you don't get banned and get a blue check-mark of approval.

Really, I don't want "Bishop" Talbert Swan suspended. I want him to keep on tweeting his nonsense, calling everything that he doesn't like white supremacy. I want him to keep calling white women "pure trash" and liberal white women desperate for approval "Beckys". He does more to promote what I am talking about than I could if I blogged day and night. Keep it up "Bishop"! Like I said in the prior post about being suspended:

The Left demands that opinions and positions they disagree with be silenced entirely. I don't want the Left silenced, when twits like Alexandria Ocasio-Cortez go on a rambling screed about the "three chambers" of our government, it makes my case far better than I ever could but for the Left it is clear that they cannot win a battle of wits, logic and facts so they seek to silence their opponents.

So please, by all means keep tweeting!

FYI, even if I am not allowed to say it on Twitter, Kirsten Powers is still a bimbo.
Posted by Arthur Sido at 9:54 PM