You People All Suck! Also, Why Don't You People Buy My Book?!

Behold, a glimpse into the mind of a NeverTrump neocon. 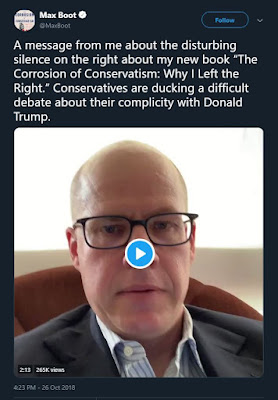 Plus I like the play button on his nose.

If you don't know who Max Boot is, and I had never heard of him prior to his daily screeching about Trump, he is a "conservative" that is awfully sore at other conservatives for not nominating someone like Jeb! Bush or Marco Rubio to lose to Hillary Clinton in 2016. I say conservative in quotes because from what I can tell his "conservatism" is mostly just a particularly violent form of generic liberalism. 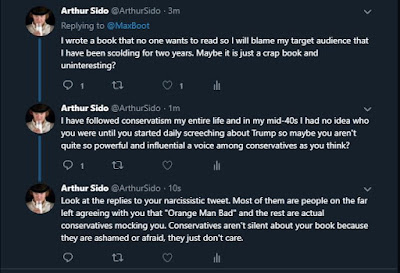 Gee, I wonder why conservatives aren't buying or discussing his book?

It is high time that the Beltway "conservatives" just stop pretending to be anything other than war-mongering liberals. The GOP has changed, for the better, and they were left behind. No one cares what Max Boot thinks about conservatism, or really about any topic.
Posted by Arthur Sido at 11:53 AM