The news came out last week that Fauxcahontas Elizabeth Warren allegedly took a DNA test and is somewhere between 1/64th and 1/1,024th American Indian (I refuse to use the PC term "Native American", as someone born in America I am as much a native as anyone else). Her identification as an Indian was useful in the past because she could claim to be a minority and get preference in job applications but today her insistence on publishing these ludicrous results (almost any white person will show up with this level of Indian-ness) has a more serious  logic to it. It is her prelude to announcing she is running for President in 2020 and trying to eliminate Trump's attacks on her silly Indian background claim up front, although it won't stop Trump from using it. South Park predicted this day...

What Warren is really up to is signaling to the leftist base in the Democratic party that votes in the primaries and are overwhelmingly far left and charging more to the left at breakneck speed. It is going to be tough to be a garden variety white liberal and win national elections in the Democratic party. While conservatives are laughing at her on social media, her test results provide some cover to her supporters.

Being a woman used to be enough to give you some street cred with the left. Women are oppressed, women make less than men (even though everyone knows that is bogus), women are always just a hair away from losing their "right" to murder their child in the womb. But then a funny thing happened. In 2016 white women voted by a slim margin for Trump over The Anointed One Hillary. That made a lot of people quite upset but then there was the "pussy hat" (liberal) women's march and lots of white women showed up to that so they could listen to Linda Sarsour rant, never once wondering what would happen to women's rights if Sarsour's co-religionists become a majority. All seemed to be OK until the Kavanaugh hearings where a lot of white women suddenly seemed to realize that the same sort of baseless, no-proof accusations that almost derailed Kavanaugh's nomination to the Supreme Court could be leveled against their husband or son or brother or nephew. It suddenly became real to them. Just like that, regular white women moved from the oppressed category to the oppressor class.

A few weeks ago a black man, Jamal Simmons, wrote a piece for The Hill titled: Understanding ‘the white women thing’. Think about the arrogance of that. Then think about what the response would be to a conservative white man writing an article titled "Understanding the black women thing". Of course those sorts of blatant double standards never get much attention. Other similar article are springing up. White women as a group are being blamed for all sorts of stuff, like this tweet demonstrates: 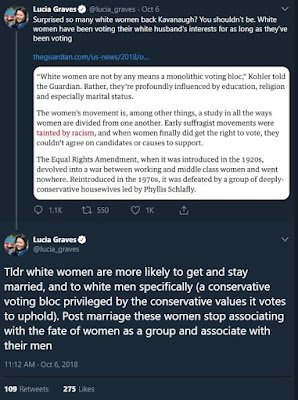 This is what Senator Warren is up against. Looking at the 2020 field you see a lot of people like Kamala Harris and Cory "I am Spartacus!" Booker. Senator Harris is bi-racial, Indian and Jamaican. Cory Booker is black. There are others on the early list, like Eric Holder who is also black. They get bonus points for oppression categories and that is going to play well in the Dem primary voting population. Warren? She is just a garden variety white liberal. She doesn't have much to set her apart except her alleged "Indian" ancestry so she takes a DNA test (also allegedly) and trumpets that she is at least a tiny part American Indian. The fact that she is potentially less American Indian than every other average white person is lost on her. She got scorched on social media, the memes were brutal but she keeps doubling-down on her claims. Why would she keep on promoting this charade? Again, to signal the liberal base.

An awful lot of white feminist women are going to be in for a rude awakening when they discover that they are no longer considered a preferred identity group. As Kyle Smith, writing for National Review (Welcome to the party pal!), states: ‘White Women’ Becomes a Disparaging Term. Here is a snippet:

Today, white women are being lumped together into a giant bloc subject to absurdly broad stereotyping and vitriolic condemnation. They’re being told to step back and know their place by writers in the New York Times (“white women benefit from patriarchy by trading on their whiteness to monopolize resources for mutual gain”), The New Yorker (“despite the enduring legacy of testimony by black women, white women have often played the protagonists in the history of sexual violence, and black women have been relegated to the supporting cast”) and NBC News (“white women who voted for Trump . . . clearly have no issue with the president’s openly misogynistic behavior, his demeaning of female reporters and his mocking of [Christine Blasey] Ford”).

So give Elizabeth Warren a break. She is simply trying to distance herself from her obvious racial heritage in order to preserve her political future.
Posted by Arthur Sido at 11:52 AM